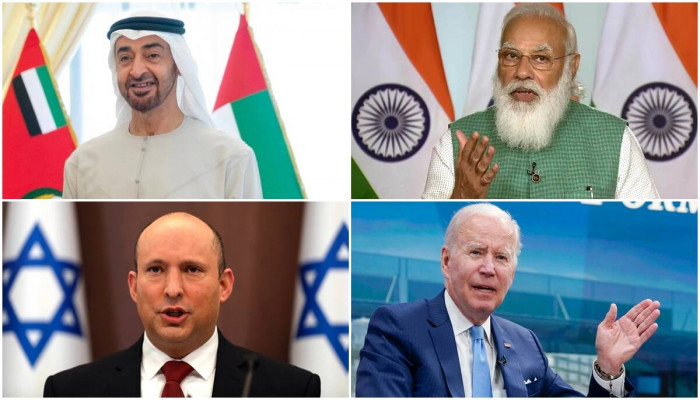 After embracing Trump’s Indo-Pacific policy, President Biden is all set to give a huge fillip to his predecessor’s Middle East policy as well. In September 2020, Trump pushed for the transformative Abraham Accord favouring the normalisation of Israel’s relations with the regional states and its eventual integration.  Soon, Israel established diplomatic ties with the UAE, Bahrain, Morocco and Sudan. Considering the huge geopolitical churn in the region on the anvil with Turkey claiming the leadership of the Muslim World and Pakistan’s alignment with Turkey, Egyptian Strategist Mohammed Soliman envisioned a great promise in the Indo-Abraham Accord. A trilateral strategic partnership of convergence of interests between India, Israel and the UAE1.

Turkey’s quest for dominance, rivalries with Greece and Cyprus, support for the radical Islamic Brotherhood, Iran’s aggression besides widening the fissures in the region have underscored the need for a regional coalition.  Given the burgeoning strategic depth of India’s relationship with Israel and other Arab states, the idea of a new geopolitical coalition began to gain traction.

The idea quickly matured into a new concept when EAM Jaishankar on his visit to Israel in October 2021 held a virtual conference with foreign ministers of the UAE and the US. The meeting which was called “International Forum for Economic Cooperation” discussed the possibilities for joint infrastructure projects in transportation, digital infrastructure, maritime security and trade. The UAE foreign minister referred to the same as “West Asia Quad”.

The nascent “West Asia Quad” shot back to international headlines after a US official informed of a virtual meeting of the leaders of the West Asia Quad during Biden’s visit to Israel, West Bank and Saudi Arabia. Assuaging concerns of the allies and partners in East Asia, Biden revived the Quad holding four summit meetings with leaders of member countries in 14 months, launched AUKUS (Australia, UK, US) security alliance for Indo-Pacific and Indo-Pacific Economic Framework (IPEF). Amid looming energy supply and food security challenges and to make up for its extrication from the region, the US has lent a new name to the minilateral with India, Israel, the UAE, the US as I2U2 to reclaim its footprint in the region.

The first virtual summit of the leaders of I2U2 scheduled for next month will be steered by the complementary strengths of the nations to address common challenges and threats. Notably, the significant upgrade in the level of engagement underscores an elevated level of synergy.

Akin to the Quadrilateral Security Dialogue, the evolution of I2U2 is galvanised by various factors-the US retrenchment from the Middle East during the Trump regime has created a strategic vacuum. Beijing opportunistically attempted to fill the gap by enhancing its influence in MENA (the Middle East and North Africa) region. Also, America’s unilateral pullback from the JCPOA (Joint Comprehensive Plan of Action) has changed the strategic calculus in the region and renewed fears of Iran as a major threat. Subduing these fears Washington gave a major push to Abraham Accords and paved the way for formal diplomatic engagement between Israel and the UAE.

Alternatively, Iran which joined the BRI in 2016 bolstered ties with China by signing a Comprehensive Strategic Partnership in 2021. In the quest for warm waters, reeling under sanctions keen on accessing the Indian Ocean Russia too warmed up to Iran. Additionally, Washington’s permanent withdrawal from Afghanistan eventually laid the ground for a geopolitical axis- China, Iran, Russia and Pakistan. Ostensibly, this strategic realignment has a major impact on the stability of the region.

The plausible reality of a new axis in the region has in a way spurred the coalescing of all the four nations who certainly have common interests in the region. This multilateral has sparked new interest among strategists trying to draw parallels between the Quad that focuses on the challenges in East Asia vis-à-vis I2U2 of West Asia. As of now, economic cooperation is the mainstay of the minilateral with strategic security as its implicit underlying objective.

Briefing about Biden’s visit, the US official announced, “we consider these initiatives central to our strategy of empowering partners and encouraging them to work more closely together, which will lead to a more stable region and also to Israel’s security and prosperity over the longer term”.

Built on the robustness of the bilateral relations, the I2U2 will facilitate India to move away from working in silos and joining the four-way conversation breaking the self-imposed ideological shackles.

Though India launched the “Look West Policy” in 2005, it lacked the assertiveness to pursue wide-ranging partnerships with the countries in the region. The relations with the GCC and the Middle East revolved mostly around energy supplies, trade, diaspora and remittances. Modi’s visit to the UAE for the first time in 34 years in 2015 has been a gamechanger. As the US began to extricate itself, India upped the game of deepening strategic relations with the region.

With proactive engagement and in line with Arab countries “Look East Policy” and pro-developmental aspiration of diversifying an energy-dependent economy, India stepped up engagement with the countries seeking infrastructure investment opportunities. Powering the bilateral relations with economic cooperation, India exuded its seriousness by concluding FTA (Free Trade Agreement) with the UAE after record three months of negotiations. Setting a target of $100 billion in bilateral trade by 2030, India built a robust strategic partnership with the UAE. No longer encumbered by the religion tag, which Pakistan wielded to wean off India from West Asia, India has pragmatically engaged with Arab countries. The FTA which has come into force from May 1st is expected to generate over 10 lakh jobs in the next five years.

After three decades of establishing diplomatic ties with Israel, abandoning the Israel-Palestine hyphenation, India displayed renewed commitment and assuredness in engaging with Israel. Lending much-needed credence to the largely under-radar relations, with an iconic visit to Israel in 2017, the first-ever by any Indian prime minister, Modi has revitalised ties with Israel. Pivoted on the pillars of cooperation in defence, science and technology, water management and agriculture, Israel is now India’s fourth-largest defence supplier and both countries are working towards an FTA agreement by the end of the year.

Similarly, there is a huge upsurge in India-US relations. Strengthening the strategic partnership by signing all the four foundation agreements and regularly holding 2+2 Ministerial Dialogue, India and the US, active partners in the Quad that envisions a free, open and inclusive Indo-Pacific are now coalescing to evolve a new framework for West Asia as well. Guided by common values and shared interests, India and the US are seeking to further Indo-US Strategic global partnership through a new cooperative framework to address the challenges of the region.

Overall, there is a greater convergence of interests among the partners of I2U2. Israel and the UAE cooperation which is springing forth on the foundation of economic and technological cooperation will serve as the bedrock for I2U2 as well. Emulating the Quad template, the ambit of I2U2 will be cooperation on non-military aspects, to begin with. Strategic security is unlikely to figure in the agenda of I2U2.

I2U2 will mark a new milestone in India’s foreign policy. Integral to Indo-Pacific strategies, New Delhi has ramped up its engagement to new levels with the East Asian countries and Australia. I2U2 will open a new gateway of opportunities for India in West Asia and will augur well for India’s new regionalism to the West of the subcontinent. Reimaging policies towards West Asia, India has displayed the possibility of non-ideological engagement. Building on the strength of convergence of interests, the US has unveiled a new forum. It remains to be seen if the countries can sustain this momentum of cooperation in the long term.