Shaheed Laxman Naik- A forgotten tale of heroism and sacrifice 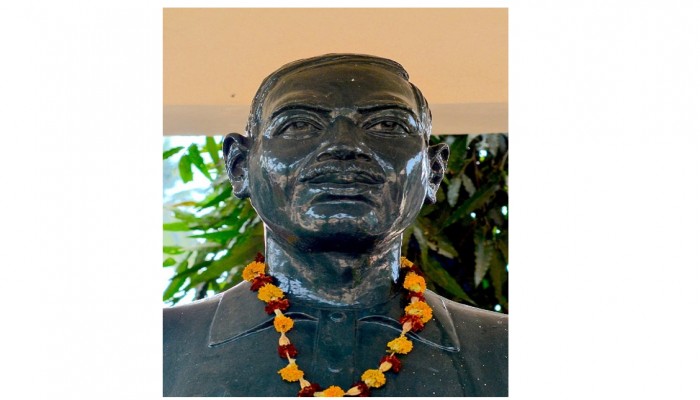 While many know of this quote by Jawaharlal Nehru-

“At the stroke of the midnight hour, when the world sleeps, India will awake to life and freedom”.

How many have ever heard of the following quote-

“If the sun is true, and so is the moon, it is then equally true that mother India shall be independent”.

These words were spoken by none other than Shree Laxman Naik, one of many India’s great but less popular freedom fighters whose feats and exploits are unparalleled till today. Throughout his life he fought against the Britishers and sacrificed himself for Bharat Mata in the process. This year marks his 120th punya jayanti.

Laxman Naik was born 22 November 1899 to Padlam Naik, tribal chieftain of the Bhuyan tribe, in a very remote region in Tentuligumma, Malkanagiri division of Koratput district. Right from childhood, he hated the way the British treated his tribe and actively rebelled against them which led to his growing popularity not only in his tribe but also amongst his neighbouring regions. Besides, he was an able administrator and played a major role in developing good drainage systems and pucca roads. Realizing the importance of modern education, he introduced adult education classes in many tribal regions and was instrumental in transforming his village into a model village.

The local congress polity recognized his talent and admitted him to their party. He was so greatly influenced by non-violent freedom struggle that he travelled to many neighbouring villages spreading the message of ahimsa and led many resistance movements. One great example was the successful organization of a movement against alcohol consumption in front of liquor shops. Since many tribes were addicted to alcoholism, this protest helped to save many families affected by alcohol abuse. As a Gandhian he promoted ‘Khadi’ and dissuaded people from wearing foreign clothes and paying taxes to the British government. Due to his strict adherence to the Gandhian principles, he was fondly called as ‘Gandhi of Malkanagiri’.

Due to his exemplary leadership skills, Naik was appointed as the President of the Congress Primary Committee in 1939 his effect was considerable. Within less than a year he recruited around 2000 party workers in the small region of Tentuligumma alone.  He established many Ashram schools in Udoyogiri, Pandra Guda and Tentuligumma that served as epicenters for party recruitment. By 1940 he made charkha very popular even in the remotest of the remote tribal areas of Malkanagiri and the ashram education prompted many tribals including Naik himself to give up hunting and meat, a rare feat in those days! He was also arrested many times during this period for his campaigns against illegal exactions, and stringent forest laws through which British used to usurp any tribal property. The campaigns made the local estate authority very uneasy and they tried to employ henchmen against Naik with no success.

However, greater things were in store for him. In 1942, during the peak of Quit India Movement, Naik led a peaceful procession towards Maitili police grounds with the intention of hoisting the congress flag atop the police station. Naik passionately appealed to the crowd against giving forest dues to the government. Such was his speech that many people (almost 1000) started joining the protest after hearing him. A large crowd made the authorities nervous and they responded with lathi charge and indiscriminate firing leaving 40 dead and more than 200 injured. Among the dead was a forest guard, G. Ramayya- an opium addict who accidentally strayed into the crowd and was shot. This gave the local police a great excuse to arrest Naik in the murder of G. Ramayya. Despite several pleas for his innocence, Naik was sentenced to be hanged in Berhampur jail on 29 March 1943.

A day before the hanging Naik, he met Sadashiv Tripathy, a congress leader of Koraput. Naik told him," Sir, I am leaving. Are we really going to get the power of self-rule, the Swaraj? Will people live in peace?" Sadashiv replied in a choked voice," Oh! Surely. Should there be any doubt about it?" Naik told, " Victory to Mahatma Gandhi".

On the day of hanging, while the entire prison was crying and slogans of ‘Inquilab Zindabad’ resonated throughout the prison walls, Laxman Naik marched courageously towards the gallows to embrace death as a true hero. His last words were “If the sun is true, and so is the moon, it is then equally true that mother India shall be independent”. The executioner pulled the lever and thus ended the saga of heroic struggle and sacrifice of this great son of Bharata who battled courageously against the abusive British rulers with an uncommon enthusiasm and zeal of a warrior.

Unfortunately, his name hardly finds a mention in history textbooks and apart from releasing stamps, building a hospital and naming a road in his honor, nothing much has been done. One hopes that the government become more proactive in reviving the legacies of these great freedom fighters and start introducing them in history books (not as mere footnotes!) at least for starters. If we remain complacent, we would be doing great disservice to the younger generation who would grow without knowing the legacies of these great leaders who released Bharata Mata from the clutches of wretched invaders. Jai Hind!