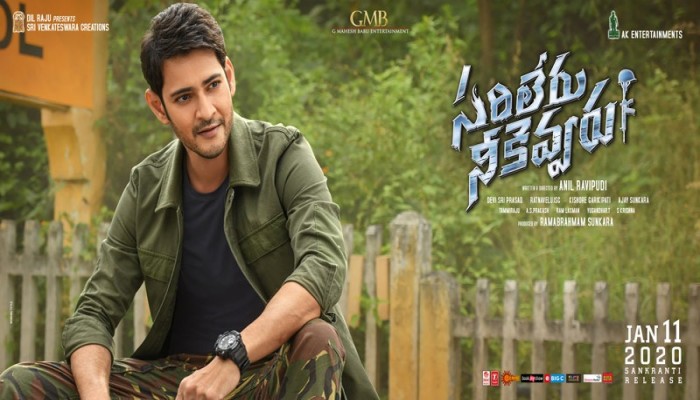 Disclaimer: I won’t dwell into the story. That is for you to watch in the theater. I will only tell you what I felt about the movie.

More often than not, you would know where a movie is heading in the first 15 minutes or so. I got ample idea of where this one was heading right from the start.

The director of this film Anil Ravipudi’s forte is comedy. His last film was “F2” which was a major success last year. He tried repeating that in this film too albeit with little success.

The comedy scenes follow the same pattern throughout the movie. Most of them look forced. Genuinely funny scenes are few and far between.

The director relies heavily on Mahesh’s star power but with a story as thin as this, even Mahesh couldn’t carry the burden fully.

Film also gets a little preachy at the end in a monologue scene where Mahesh explains about the Political situation in the country and Army’s role in safeguarding the country. The intentions are good, but you are already exhausted by the time you get to the climax.

To put it simply, the movie follows the routine commercial template and offers nothing new in terms of the story.

Its an out and out Mahesh Babu’s show. His all-round performance is what makes you sit through. You get to see a few glimpses of the Mahesh that we saw in “Khaleja” especially in the comedy scenes. For the most part of it, he owns the comedy scenes with Rajendra Prasad assisting him ably. His voice modulation and mannerisms will bring a smile on your face especially when he says “Take a bow”.

You would know that he has put in extra effort into his dancing when you see him in the songs “Dang Dang” and “Mindblock”. It would be a feast for the fans.

His mass avatar in the pre-interval action episode is terrific and shows why he has such a huge mass following in Telugu states.

Vijayashanti does her part ok though you wouldn’t call this a roaring comeback role. Her make-up though is overdone evident especially in the close-up shots. Care should have been taken there.

Prakash Raj does his part well as usual with a blend of comedy and ruthlessness. You will see the “Okkadu” combo of Mahesh-Prakash Raj back. And guess what, Kurnool’s “Kondareddy Buruju” fort is also back as was the case in “Okkadu”.

Rashmika Mandhana has very little to do with the story of the movie and is there just for that train comedy scene and the songs. Her “meeku ardham avuthondha” dialogue I thought was a little overdone.

There are a bunch of other actors like Rao Ramesh, Sangeeta, Murali Sharma, Ajay, Jaya Prakash Reddy, Vennela Kishore. All of them did their part just fine.

Music is just ok with a couple of catchy numbers like “Dang Dang” and “Mindblock” but have to say this is not his best album. The background score seems monotonous with the “Sarileru Neekevvaru” title theme being played in the background for the most part.