Sanskrit in Sri Lanka: From Bygone to Modern Era 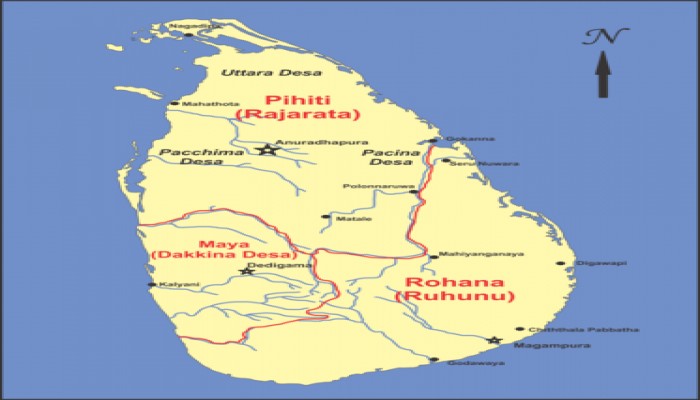 Sanskrit is the oldest language of the world in which civilization and culture took their first breath. It is a fact that this beautiful language flourished on the land which is known as “India that is Bharat” and later on expanded to other regions.

Sri Lanka is an ancient geography which is connected with India, culturally and politically as Lanka, since the times of Ramayanam – The earliest itihasa composed in Sanskrit. Reference of Sri Lanka is also found in literature of other later Indian languages. Being almost connected with the mainland India, footprints of Sanskrit is naturally found in Sri Lanka in form of inscriptions and literature. Historical accounts of Sri Lanka also contain useful information on the same.

Sinhala, the most spoken language of Sri Lanka, is also influenced by Sanskrit a lot. The same influence is also observed in the Sinhala literature of bygone era. Sinhala script to write this language is derived from Brahmi. Earliest Sanskrit inscriptions in India are found in Brahmi script. Thus, language and script – both of Sri Lanka, are derived due to influence of Sanskrit.

Sri Lanka finds regular mention in recorded History on account of Indian Emperor Ashoka Maurya in 3rd Century BCE who sent missionaries in neighboring geographies to convert kings/people into Buddhist fold. Buddhism paved its way in Sri Lanka with teaching of Buddha but the language was Sanskrit and Pali. Mahayana Buddhist monks and Indian/Sri Lankan Vedic Brahmanas pushed Sanskrit while Theravada Buddhist monks pressed Pali as the royal language in Sri Lanka. Before converting to Buddhism, Sri Lankan king was following Vedic Dharma where Sanskrit plays pivotal role. So, it is evident that Sanskrit was already in vogue in Sri Lanka before arrival of Buddhism. Decline of Buddhism in India must have increased the use of Sanskrit in royal communications and meetings for Sri Lankan kings/royals with their Indian counterparts.

Fa-Hien, A Chinese traveler who visited Sri Lanka in 5th Century witnessed Sanskrit manuscripts at Buddhist monasteries of Anuradhapura kingdom of Sri Lanka. He stayed at Abhayagiri Vihar, the biggest Sanskrit library in Sri Lanka. Mahavamsa and Dipavamsa, earliest historical accounts of Sri Lanka composed in Pali language, are based on the characteristics mentioned for composing Sanskrit mahakavya. Era of Anuradhapura kingdom witnessed significant growth and importance of Sanskrit in literature and inscriptions which is captured in detail in this article.

Ancient Sri Lanka with Anuradhapura as the capital

After the fall of Anuradhapura, ancient capital of Sri Lanka, in 1017 CE by Chola king Rajaraja, Polonnaruwa and then Dambadeniya kingdoms became the political centers in Sri Lanka till 1345 CE. As per Mahavamsa, in this period, Sanskrit flourished a lot and became the language of the masses. Sanskrit education for all royal posts were mandatory in this period. During these 350 years, Sanskrit was promoted by almost all Sri Lankan kings.

Sigiriya (Sanskrit simhagiri) was the ancient capital of Sri Lankan kingdom. Today, it is a WHS (World Heritage Site) known for its beautiful frescos and mirror wall among many other attractions. Few Sanskrit graffities and poetic verses on this mirror wall are observed whose antiquity goes as far as 8th century.

Sanskrit literature in Sri Lanka has a long history. Kumaradasa composed Janakiharanam – abduction of Janaki, based on Ramayanam. He lived before 7th Century. Manjushribhushita, a text on Architecture is attributed to Manjushri, a Buddhist author who is believed to have lived before 8th Century. Another Sanskrit work is Jatakamala, a collection of Jataka tales. Chatushatakavya and Chittavishudhiprakaranam by Ariyadeva and Anuruddha-Shataka are other notable Sanskrit works.

One Sanskrit work of 12th Century stands out among all is Mahabodhivamsha-Getapada where Panini, Kalidasa and his works (Raghuvamsham, Meghadutam, Kadambari etc.), Bana, Harsha etc. Sanskrit scholars of India and their works are quoted. In 13th Century, Gurulugomin, in his work Dharmapradipika, utilized number of Sanskrit texts. Reign of Parakramabahu – II (13th Century) also witnessed Sanskrit literature and/or deep effect of Sanskrit on Sinhala literature.

14th Century onwards, we see start of decline of Sanskrit and rise of Sinhala literature but still Sanskrit verses and quotes gets special mention in them. Sinhala does contain significant Pali and Sanskrit vocabularies. The oldest Sinhala poetic work, Siyabaslakara (9th Century CE), is inspired by Indian Sanskrit poetic work Kavyadarsha of Dandi. This Sinhala literature refers Sanskrit as Devabhasha (Language of Gods), a common term used for Sanskrit.

In 18th Century, few independent Sanskrit literature scholars also composed some verses in the form of Ashtaka (Composition of 8 verses) in Sanskrit under the royal patronage during that time.

In 19th and 20th Centuries, as a part of Sanskrit revival projects, many grammatical and literary works written and published in Sri Lanka. Even today, Sri Lankan monks study Sinhala, Pali and Sanskrit as part of their ascetic life. One notable submission is that Suryasiddhanta, an Indian astronomical text composed in Sanskrit in around 4th Century, is the base of traditional astronomy of Sri Lanka.

Sanskrit is always associated with knowledge, wisdom, information and almost all the aspects of learning. In the divine form, Sanskrit gets associated with Sarasvati Devi who is worshipped as the mother of knowledge and wisdom. Vedic chanting in Sanskrit in form of musical instrument and knowledge of Sanskrit in form of manuscript, in two hands of Sarasvati Devi, are found in almost every sculpture, not only in India but also out of India, wherever Indian kingdoms are established.

Sculpture of Sarasvati with Manuscript, Musical Instrument and Lotus

University of Colombo, founded in 1921 under colonial rule, is the oldest university of Sri Lanka. It is in the capital city Colombo. Motto of this university is in Sanskrit written in Devanagari script. It reads “à¤¬à¥à¤¦à¥à¤§à¤¿à¤ à¤¸à¤°à¥à¤µà¤¤à¥à¤° à¤­à¥à¤°à¤¾à¤à¤¤à¥” which officially means “Wisdom Enlightens”.

Official Emblem of University of Colombo

Originally established in 1942, University of Peradeniya is the largest university of Sri Lanka located near Kandy. Official motto of this university is also in Sanskrit. Written in Devanagari script, it is “à¤¸à¤°à¥à¤µà¤¸à¥à¤¯ à¤²à¥à¤à¤¨à¤ à¤¶à¤¾à¤¸à¥à¤¤à¥à¤°à¤®à¥” which officially means “Knowledge is the eye unto all”.

Official Emblem of University of Peradeniya

Founded in 1972 at Moratuwa near Colombo, University of Moratuwa’s official motto is “à¤µà¤¿à¤¦à¥à¤¯à¥à¤µ à¤¸à¤°à¥à¤µà¤§à¤¨à¤®à¥” which means “Wisdom is all wealth”. This text and meaning are given in the explanation of the University’s emblem on the university website https://uom.lk/ta/emblem-university. The same has been reproduced in the image below.

Official Emblem of University of Moratuwa

Here lies a serious error. The text à¤µà¤¿à¤¦à¥à¤¯à¥à¤µ à¤¸à¤°à¥à¤µà¤§à¤¨à¤®à¥ wrongly depicted in the emblem as à¤µà¤¿à¤¦à¥à¤¯à¤¯à¥à¤µ à¤¸à¤à¤µà¤°à¥à¤§à¤¨à¤®à¥ (Prosperity by only wisdom) which is not only wrong but differs from the official explanation given on university website. Such type of error is strange because while setting up the motto of any institution or organization, utmost care is taken regarding the language and script. It is also strange as the university was established way back in 1972 but still the wrong motto is being used.

In 1986, Sri Lankan National Honours Act came into existence which paved way for honours and medals with Sanskrit words given to Sri Lankan nationals. “Srilankabhimanya” is the highest national honour among them given for outstanding and distinguished service to the nation. Few notable honours with Sanskrit words are Deshamanya (For Highly Meritorious Service), Deshabandhu (For Meritorious Service), Srilankashikhamani (For Service to Nation), Veerachudamani (Bravery of Highest Order), Vidyajyoti (For Outstanding Scientific and Technological Achievement), Kalakirti (For Outstanding Achievement & contribution in Arts Culture and Drama).

Honours given to non-Sri Lankan nationals for their notable efforts towards building friendly relations and other such contribution are also in Sanskrit.

Even if the names and surnames are Sinhalese, deep effect of Sanskrit is clearly visible. The list is only indicative for understanding purpose. People following to game of Cricket can instantly remember and recognize many such Sanskrit influenced names and surnames of Sri Lankan cricketers.

Sri Lanka has a very long association with Sanskrit in almost every field of civilization and culture. Before arrival of Buddhist missionaries, it was Vedic Sanskrit at helm by royal Brahmanas (mostly purohits). After arrival of Buddhist missionaries, Sanskrit was there but its terminologies got changed. Vedic concepts, already on the verge of decline, were dethroned by Buddhist Darshana. Sanskrit had to fight with Pali to stay afloat. Thanks to Mahayana Buddhism, required oxygen was received and by the time Fa-Hien came in 5th Century, Sanskrit was having a respected position.

From 5th to 13th Centuries, Sanskrit enjoyed enviable position and royal patronage. Be it literature or inscriptions. Be it education or refining the future official language of independent Sri Lanka. Occasionally, Sanskrit met with a resistance from few fanatic Buddhists which resulted in the destruction of manuscripts. Still Sanskrit survived and reached to pinnacle.

With time, it mixed with Tamil and Sinhala only to get sidelined from 14th Century onwards. Even though it was sidelined, Sanskrit never perished. Somehow it was kept alive either by visiting Indian scholars or natives and finally becomes stably etched with glorious past and unforgettable memories of centuries.

With the offspring Sinhala language, Sanskrit is still felt in the form of National Anthem of Sri Lanka – Sri Lanka Matha (Mother Sri Lanka) – where four times Sinhala namo echoes the same Sanskrit namo (Salutation) … as if Sinhala herself saluting to Sanskrit, her mother … the original Mother of culture and civilization of Sri Lanka!