Sanskrit in China: Arrival and Discovery 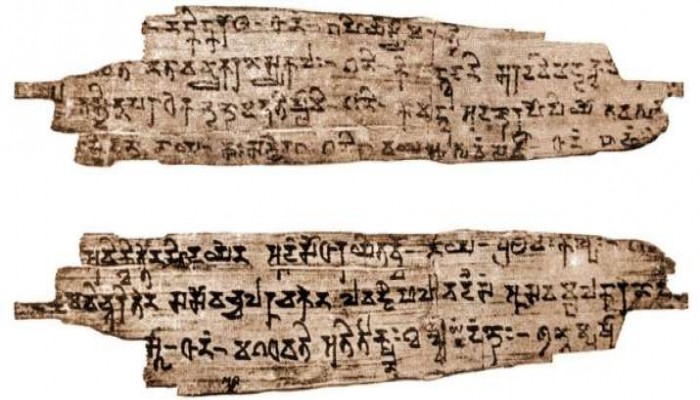 Sanskrit is the ancient most language of India and literature. Since ages, much of the knowledge of tradition, culture and civilization of India is passed down, from generation to generation, in this language only. Some prime forms of this knowledge were – Oral tradition, Manuscripts, Paintings/Drawings, Poems/songs, Inscriptions, printing etc.

The reach of Sanskrit was not limited to India. With the technique of writing over palm leaf and other materials, in form of manuscripts, Sanskrit started her travel out of India in the physical form. Later, printing technology boosted this reach. Sanskrit was always respected as the language of knowledge wherever it reached.

Geographically, after engulfing Tibet, China is now a bordering nation of India. Since centuries, natural border in form of Himalayas and other northern mountain ranges, accompanied by the hostile climate, kept the civilizations of both the countries almost detached. It is said that air, water and knowledge always find out the transmission path. Same way, the hunger of knowledge and few other factors helped China to ultimately break this natural barrier of snowy mountains and hostile climate to reach to Sanskrit.

This article is aimed to provide the information on two topics –

Discovery of Sanskrit In China

It was 1890 CE; India was under the British rule. Hamilton Bower, a British army officer was sent on a secret mission. His secret mission is to find out the murderer of a British merchant. He gets the information that murderer has left India via Ladakh and going to China by crossing Karakoram Pass. He follows the route and arrives at Kucha, a Chinese town located in the Xinjiang region of China. See the map below to understand the placement of Xinjiang region on top of Ladakh (Indian territory).

Kucha was once a thriving center on the ancient Silk Route. This was the route connecting China to India, Middle East and Europe via land. See the map of this Silk Route and the location of Kucha on the north part between Aksu and Turfan. Karakoram Pass between India and China can also be seen from where Mr. Bower traveled.

Bower takes help of a local person to guide him but he could not find the murderer. He was about to return empty-handed until that Chinese guide takes him to an old place where Mr. Bower finds a manuscript. It was written on a birch bark. Script of this manuscript was Brahmi and the language was Sanskrit. This manuscript is now known as "Bower Manuscript" in honor of Hamilton Bower.

This Bower manuscript is the very first Sanskrit Manuscript discovered from China. Bower gives this manuscript to Asiatic Society of Bengal. The first decipherment of it gets published in April1891. This discovery opens up the Pandora box of Sanskrit manuscripts and texts lying in China since centuries.

Bower manuscript is dated to early Gupta era (~3rd c. CE). It records Medical treatise. This manuscript proves early connection between India and China. Also, Buddhism gets limelight after this discovery. Prof. G. Buhler, a German Indologist, was instrumental in post discovery activities of this manuscript. Once the news and subsequent decipherment of this manuscript is out in 1891, many European agencies started sending their expedition teams to China.

Russia sent a team to Kashgar (Refer the map again) in 1892 where few more manuscripts were found. Subsequently, Russian Archaeology Society published the report. Explorers of France were also not behind in the quest. In 1892, the manuscript on à¤§à¤®à¥à¤®à¤ªà¤¦ in Gandhari variant of Prakrit language was acquired by them near Khotan (Refer the map again). This manuscript was dated to ~2nd c. CE making it one of the earliest dated manuscript on Silk Route.

After 1892, adventurers, archaeologists, explorers began digging the desert and places of ancient Silk Route which resulted in discovery of many more manuscripts, printed items, scrolls, caves, monasteries etc. One of the biggest treasures were found in Mogao Caves.

Arrival of Sanskrit In China

As per Chinese tradition, Monks from India brought Sanskrit texts to China and translated into Chinese. Tradition says they came from early Kushan kingdom on invitation of the then ruling Chinese king. The route they took was the Silk route, connecting Central Asia to China.

Historical account of Han dynasty (205 BCE – 220 CE) of China attributed this legend to King Ming (58-75 CE). According to few scholars, arrival of Sanskrit was recorded around 2nd century BCE during Han dynasty. The legend of king Ming says - One day he dreamt of Buddha and inspired from the dream, he sends a mission to find out translators from India who can bring Sanskrit texts and do translations for him.

Extent of Han Empire in China

Around 68 CE, Chinese mission returns with two Indian monks, probably with the help of Kushanas ruling over areas bordering to ancient India. They are – Kashyap Matang and Dharmaratna. Along with them, abundant Sanskrit manuscripts enter China for the first time. Legend says they both came on two white horses.

A Chinese Painting Depicting Arrival of Sanskrit In China

To celebrate this historical and much awaited event, King Ming builds a monastery in Luoyang, the then capital and one of the prime civilizational centers of China. This monastery is named “White Horse Temple” which is in existence even today. At this place, those two monks spent many years and translated many Sanskrit texts into local languages. The very first translated work is now known as – Sutra of Forty-Two Chapters. This monastery then becomes the epicenter of Sanskrit translation works and Buddhist monks coming from India in China, for years, until other places gets developed on Silk route later on.

Along with Sanskrit, not only Buddhism but Hinduism also reached China. Indian culture, philosophy, art, literature, thoughts, knowledge and many other civilizational aspects also reached to China and played pivotal role in shaping up Chinese civilization and culture. It must be noted that this was perhaps the most systematic and natural way where a country gifted its civilizational treasures to another country. Subsequently, China produced many influential students, thinkers and travelers who came to India in search of knowledge. They not only learnt, understood and mastered Sanskrit but also translated many texts in Chinese and other popular languages. However, Indian Sanskrit scholars kept going to China and developed many centers.

China’s Xinjiang region (Refer the very first map in this article) turned into a hub on silk route. Xinjiang and other territories witnessed rise of many centers/cities like Kashgar, Khotan, Kucha, Turfan, Dunhuang, Qizil etc. as well as few oases. These centers acted as shelters and halting places for travelers. They helped transmitting Sanskrit texts not only to China but to East Asian territories like Korea, Japan till perhaps 13th century. One such center was Crescent Moon Lake. It is an oasis in the arid and hostile region of Xinjiang.

Crescent Moon Lake in The Desert of Xinjiang

With the destruction of these centers and related temples/monastic establishments in medieval period, vast corpus of Sanskrit texts is also either destroyed or kept in hidden places. After centuries, in late 19th century, their accidental discovery unraveled the lost and beautiful journey. Discovery also connected the dots of Indian Nastik Darshan (Buddhism) with East Asia (China, Korea, Japan).

According to Prof. Lokesh Chandra, “Sanskrit was the mind of the silk route, a bridge of dreams floating across cloudless skies of the sand”. He also says – “Sanskrit fragments found on the silk route are tears of the time”. What an apt thought considering the hostile atmosphere and geography of silk route!

[1] Maps and Images – Encyclopedia of Britannica and Internet.

[2] Research papers of Shashibala and Lokesh Chandra published in an international seminar (Dec-2013).