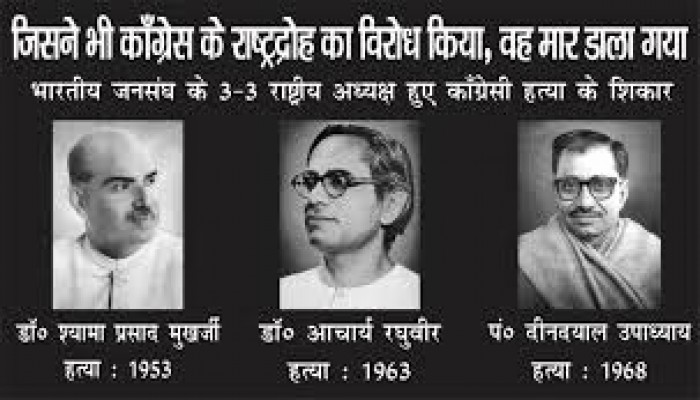 I learnt about a LEGEND today, hours passed and hundreds of drafts wasted, but unable to give a proper introduction because I’m finding shortage of words and mixed emotions filled with anger and despair.

He was the President of JANSANGH when he was Politically Assassinated. He was on his way to campaign for Ram Manohar Lohia. RAGHUVEERA was his name. Our tragedy is that successive governments denying Indians from knowing about people whose contribution was ENORMOUS but erased so that there's only ONE FAMILY left to worship.

Before joining Jansangh Raghuveera was Congress leader, a member of Constituent Assembly and two-time Rajya Sabha. He left the Congress party when Nehru continued Anti National Policies even after being warned that China was not a "Cultural Brother, Rather Expansionist".

Raghuveera was born in Rawalpindi on 30 December 1902. He did his MA from Punjab University, and received Ph.D. from London. After coming back to India, he became the Head of the Sanskrit Department of the Sanatan Dharma College, Lahore. Even before RSS began work in Lahore, Raghuveera established Hindu Rakshak Sangh, and used to hold daily drills in DAV College grounds. The Love for Sanatana Dharma enabled him to join Jansangh decades later.  He coined some 1.50 lakh scientific and parliamentary terms with Sanskrit as the common base just like Latin is for European languages. His Greater English-Hindi Dictionary remains his fundamental contribution to the cause of Indian languages.

Raghuveera wanted to re-establish Bharat as Jagat Guru by researching, excavating, collecting an estimated THREE LAKH SANSKRIT MANUSCRIPTS. Some of these relics which contained glorious work of the Hindu and Buddhist Sanyasis are spread worldwide and specifically in China, Mongolia & South East Asia.

He had mastered many languages including Hindi, Sanskrit, Persian, Arabic, English, Urdu, Bengali, Marathi, Tamil, Telugu and Punjabi. He was elected first to the Constituent Assembly in 1948 and then to the Rajya Sabha in 1952 and 1957.

In 1948 he clashed with Nehru on the question of Sheikh Abdullah's repressive policies against Hindus of Jammu Kashmir represented by Praja Parishad. Dr. RajendraPrasad persuaded him to stay back with Congress but persisted that Sheikh Abdullah favoured an Islamic State but not Democracy

In 1956, Nehru government sent Raghuveera on a one-month Cultural Tour of China, but Raghuveera took three months to finish it. When he came back, he had 300 Wooden Box containing rarest of Manuscripts, and Indian antiques. He also brought home the message that CHINA MUST NEVER BE TRUSTED.

Six years before the China war he warned Nehru that his so called "Cultural Bhaai" with China will not bode well for India since China was an expansionist, imperialist country. The falsehood of 'Hindi Chini Bhai Bhai' was no more than a sherbet laced with the deadly poison, potassium cyanide.

In the party debates, Dr Raghuveer PLEADED with Nehru for large Anti-China, Anti-Communist Front with the Buddhist countries of South-East Asia. Nehru never agreed. In fact, he forgot he was the Prime Minister, all he wanted was to satisfy his alter ego. Disgusted by Nehruvian politics, Dr Raghuveer, ultimately resigned in December 1960 when the Chinese danger loomed large and Nehru watched helplessly.

Dr. Raghuveera was deeply influenced by Lala Lajpat Rai's ideals and thoughts. Jansangh invited Dr Raghuveer and he happily accepted the offer as Dr Raghuveer believed Jansangh advocated Lala Lajpat Rai’s ideology. There were great expectations when such a luminary with a grand Hindu cultural vision joined the Jana Sangh in early 1961. His gloomy prophecies about China came true, within a year China attacked India.

Dr Ram Manohar Lohia contested for a by election from Farrukkabad. On this fateful day 14th May 1963, Dr Raghuveer was going to campaign for Lohia. The car he was travelling met with an accident and Dr Raghuveera WAS SILENCED. (WHO BENEFITED BY HIS DEATH?). The words we daily use like "Sachiv", "Sachivalay", "Doordarshan" were introduced by him.

Dr Raghuveera established International Academy of Indian Culture named 'Saraswati Vihar'. This Vihar was Dr. Raghuveera's personal center for Research work in Indian Culture, Literature and Religion. Although it was first established at Lahore in 1932, forewarned of an impending partition, Dr Raghuveera shifted the venue of the Saraswati Vihar to Nagpur in 1946 just a year before the bloody Partition of India.

It is very sad to note that despite knowing his enormous contributions neither Congress Government nor the BJP Government while in power did anything to bestow due respect to Professor Dr. Raghuveera.

Top 3 Jansangh leaders were killed mysteriously under Congress regime. Dr Raghuveera was survived by a son and two daughters.

Image provided by the author. No copyrights violation intended.