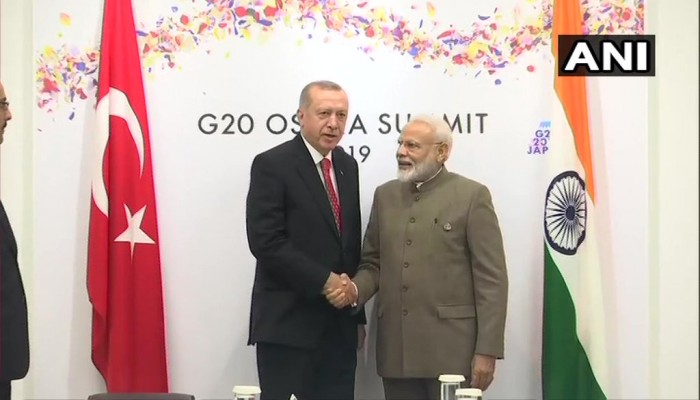 Glimpses of Erdogan’s ideology has been evident from the way he championed the likes of Muslim Brotherhood (MB) and Jamaat-e-Islam (JI), which carries out violent attacks against minorities in South Asia. JI started by Syed Abdul Ala Maududi in 1941 served as ideological fount in advancing partition and Islamist Movement. It turned into a platform to recruit terrorists. Erdogan strongly defended actions of JI and condemned Bangladesh for executing its operatives.

With the blessings of Erdogan, in 2005 Turkey created Istanbul based-Union of NGOs of Islamic World (UNIW) to create “Ummah consciousness”. It has 340 organisations spread in 65 countries under its ambit. Helping Hand for Relief and Development (HHRD) and Kashmir Action Council (KAC) are the US-based wings of UNIW. HHRD has close ties with Falah-i-Insaniyat, the charitable arm of LeT responsible for 2008 blasts and Hizbul Mujahideen (HuM) headed by Syed Salahuddin architect of several attacks in India. KAC close ties with deep state Pakistan and its role in influencing American policy on Kashmir is well known. Director of KAC, Gulam Nabi Fai who served 16 months for receiving $3.5 million has close ties with JI, instrumental in introducing Wahhabi Islam in Kashmir.

Fai, currently a board member of UNIW is pursuing Kashmir issue through World Kashmir Awareness Forum. UNIW includes several media agencies and think-tanks to advance Islamist agenda. Erdogan’s daughter Sumeye Erdogan is vice-head of Women and Democracy Association (KADEM). Turkey is penetrating the American society through JI’s proxy group Islamic Circle of North America (ICNA).  The scale and spread of the Turkey funded terror operative is on a rise. In October, Russian envoy at UN, accused Turkey of dividing terrorists into good and bad and supporting Hayat Tahrir-al-Sham (HTS), new incarnation of Al Nusra.  While Pakistan is the fountain head of terror, Turkey is abetting terror through financial support.

Turkey is wooing Indian Muslims who harbour a special fascination towards the erstwhile Muslim Caliphate. Getting ready to brace the mantle of Ottoman Empire, Turkey is reaching out radical Muslim clerics in India. Lucknow Imam Sheikh Salman Al-Husaini Al-Nadwi, who created a controversy for condoning ISIS and later retracted his statement following intense backlash is found to have close ties with AK Party of Erdogan. Through the think-tank South Asia Strategic Research Centre (GASAM) started by Pakistani-educated a deputy minister, Turkey is arranging trips for Indian Muslims to Istanbul extolling Caliphate idea. Hefty scholarships are offered to Indian Muslims to pursue education at institutions setup at the behest of Erdogan. Nadwi’s son Yunus who is studying in Turkey is a regular panellist in conferences organised by GASAM. Similarly, charitable institution, TURGEV set up by Erdogan foundation is found to be backing Kolkata Muslims protesting Triple Talaq.  Unlike Saudi Arabia, Turk’s moderate Islam of being acceptable to both Barelvi and Deobandi Muslims.

EU parliament took serious note to Erdogan’s attempts to Turkish Diaspora in Europe for his pursuits and issued stern warning. Notwithstanding this rebuke, Erdogan continues to breach the redlines of non-interference in internal affairs of countries and export radical ideology.

Erdogan’s ideology conforms to Islam’s theological definition of Dar-Al-Harb (regions where Islam doesn’t dominate) and Dar-Al-Islam (Muslim dominated region). These are also referred to as territories of chaos or war and territories of peace respectively. India is theologically Dar-Al-Harb and the larger goal of Muslim Caliphate has been creating Dar-Al-Islam. The Islamist agenda of Erdogan unequivocally endorses it. This concept overlaps with the Gazwa-e-Hind Pakistan’s policy towards India. This ideological synchrony furthering the camaraderie between Pakistan with Turkey. Being the lone nuclear Muslim country, Turkey which harbours nuclear ambitions seeks to salvage them through Pakistan. To this end, Turkey defended Pakistan’s right to carry nuclear tests while it denounced India and recommended Nuclear Suppliers Group (NSG) membership to Pakistan.

Qatar, a safe haven of Muslim Brotherhood supports Turkey’s war against Kurds. After the US withdrew support to Kurds, Hamas backed Turkey, with an objective of using Turkish territory to launch Zionist attacks. Following American retreat from Syria, Erdogan assumed leadership role. Turkey is reportedly stoking terrorism by supplying arms to Boko Haram and funding Nusra Front in Syria, al Qaeda in Mali. Turkey has dubious links with jihadi groups across the World. It maintains trade ties with ISIS, it can be concluded that Turkey and Pakistan can be ranked as major centres of global terrorism. Despite mounting evidences, both countries unapologetically use terror networks to foster their agendas. This unqualified congruity in their strategic outlook explains the touted “Muslim brotherhood” between both nations.

There are eerie similarities between Pakistan and Turkey with respect to their geostrategic position. Straddling across the two continents, Turkey has enormous strategic influence. Turkey used its geographic position to hilt to foster its strategic advantages. Despite Turkey’s misgivings, the Western World overlooked them as they believed Istanbul can act as a bulwark against expanding Russian presence in the region. In the recent past, Turkey has been flexing muscles and meddling the precarious peace in the Middle East. But the West is incapable of acting against Turkey as Erdogan has threatened to open the flood gates of the Syrian refugees into Europe. Turkey is hosting 3.6 million Syrian refugees. Since the Afghan invasion in 2001, America has become cash cow for Pakistan. Despite Pakistan’s subterfuge, lies and deceit, Trump administration which is keen on sealing peace plan with Afghan Taliban is softening its approach towards Islamabad. Indeed, Pakistan is using its geographic location to its advantage, twice over, playing the right cards against both America and China.

Post failed coup attempt in 2016, India’s ties with Turkey were shrouded in suspicion. Gulenists who advocate a secular agenda are believed to have engineered coup. Erdogan has purged thousands of Gulenists, cracked down on his sympathisers and tightened media restrictions. Fethullah Gulen who escaped to the US and unfavourable to the idea of re-establishing a caliphate denied any involvement.  But Turkey accused America. Erdogan believes that Gulenists or Fethullah Gulen Terrorist Organisation (FETO) has infiltrated India and New Delhi has failed to curb its activities.

Back in 2012, analyst Ruchi Sharma categorised Turkey under the larger group of Breakout Nations- the nations to watch out for future economic miracles. But Political Islam becoming the driving force of the President, Turkey steadily slid into recession. Progress and development took a back seat. India is a seat for economic opportunity, Turkey’s antipathy towards India and alignment with Pakistan explains the nation’s shift in priorities. Setting aside the economic interests, Erdogan played the high-risk gamble criticizing China of inhuman treatment of Uighur to position himself as champion of Muslim issues.

Erdogan ambition to re-establish a Caliphate created a schism in Muslim World and a nascent discernible mini-Muslim coalition driven by anti-Arab sentiment was evident at the 2019 Kuala Lumpur Summit. A new axis of power comprising of Malaysia, Turkey, Pakistan, Iran and Qatar is in the making.

Turkey is now a favourite destination for Islamist intellectuals and the proof lies in its domestic laws. Sandhya Jain in her article highlighted about Turkey’s Universal Jurisdiction laws which are part of domestic laws. Article 13 of the Turkish Penal Code says, “Turkish laws can apply to the crime of torture committed in a foreign country whether or not the crime is committed by a citizen or non-citizen”.  Khalistanis attempted to use this law. Legal Advisor of Sikh for Justice, funded by ISI and working on Referendum 2020, Gurpatwant Singh Pannun on his visit to Turkey in October 2018 paid homage to Gallipoli soldiers and secured an arrest warrant against Punjab Chief Minister Captain Amarinder Singh restraining him from leaving Turkey. Singh was in Turkey on a personal visit.

After the abrogation of article 370, ex-IAS officer Shah Faesal attempted to flee to Turkey to use this law. He planned to file a case against Home Minister, Amit Shah and Defence Minister Rajnath Singh, former Army Chief Bipin Rawat on the behalf of his political party Jammu and Kashmir Peoples Movement. According to Vienna Protocol, Prime Minister and External Affairs Ministers have diplomatic immunity. However, Faesal’s larger plans were nixed as government issued look out notice and he was caught at the airport. Congress overseas wing led by Sam Pitroda has opened party’s foreign office in Turkey. It doesn’t need a rocket science to explain that Turkey is becoming a safe haven for anti-Indian elements guided by the Pakistani handlers.

Giving teeth to the Turkey and Pakistan ties, countries are mulling an arrangement for citizens of both countries to obtain dual citizenship. Turkey is the second largest arms-supplier to Pakistan after China. After the US imposed sanctions on sale of F-16, Pakistan sought Turkey’s help. In 2018, Pakistan purchased $1.5 billion worth 30 T-129 attack helicopters. Both countries are making 17,000 tonne fleet tanker in Karachi and signed a $1 billion deal to buy Turkish made, four MILGEM-medium sized warships.

In his address to the joint session of Parliament during his state visit, Erdogan drew parallels between Kashmir and Gallipoli, Turkish resistance movement safe guarding the Dardenelles Strait in 1915. He recalled the solidarity shown by Indian Muslims through Lahore rally led by Allama Iqbal. Extending unflinching support, he said, “Today, Kashmir for us is what it is to you (Pakistanis). How can we forget those (Pakistanis) who prayed for Turkey? Our friendship is based on love and vested interests. Like in past, we will continue to support Pakistan in future”.

Despite Indian protestations, Erdogan continues to raise Kashmir issue. As a member of OIC’s contact group on Kashmir Turkey has been instrumental in passing a highly critical resolution against India along the sidelines of UNGA. Irked by Turkey’s interference, Modi met Cyprus President and Armenian Prime Minister. Hinting at India’s disparagement, Prime Minister Modi cancelled trip to Turkey in October. After withdrawal of American forces from Syria, India slammed Turkey “for unilateral military offensive” and asked it “to exercise restraint”. India suspended a defence deal for building war-ships with Turkish enterprise, issued a travel advisory to Indian tourists and expanded engagement with Armenia. Indo-Turkish relations are disaffected over a range of issue- India didn’t support Turkey’s nuclear ambitions, the bilateral ties are skewed in favour of India, collaborative construction projects in Middle East and Africa between the countries failed to kick-off and finally India refused to crackdown on the Gulen-controlled schools and institutes spread across different parts of the country. Retrospectively, Turkey revived military and larger strategic cooperation with Pakistan, courting Indian Muslims, arming the terror operatives South Asia and unleashed Islamist agenda.

At the time of writing, reports indicate that FATF decided to keep Pakistan in grey list. To avoid ‘black list’ Pakistan needed three votes. Turkey and Malaysia supported Pakistan at FATF while China took a critical note of Pakistan’s failure to curb financing of terror organisations.  Turkey once again rescued Pakistan and demonstrated solidarity. Geopolitically, China-Pakistan tango have been threatening Indian interests. Revival of Pakistan-Turkey brotherhood is posing fresh challenges to India’s sovereignty and integrity. India must up its guard against this new ideological entente cordiale.