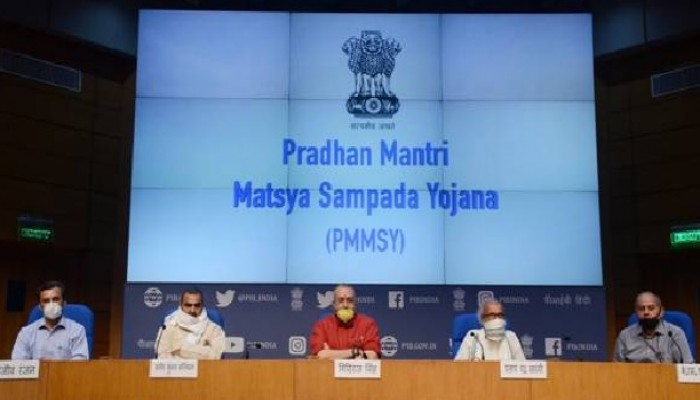 Initiatives by the Union and State governments, private sector, not-for-profit sector, and individual citizens are poised to usher in wide ranging transformation of India’s agricultural sector in the next decade. The focus of agriculture policies has shifted from mitigating hunger to mitigating malnutrition, while enhancing profitability and incomes of those engaged in agriculture and related activities; and to making India a major agriculture power globally.

Overarching premises behind these initiatives are expanding economic freedom of the farmers and others involved in the agriculture sector; introducing new technologies in all aspects of agriculture activities, including technology of the Third Industrial Revolution, based on Internet of Things 1 and harnessing traditional knowledge of India about crop diversity and nutrition; and accelerating hitherto neglected public investments in necessary infrastructure to make India a major agriculture power globally.

Fish and fish products are appropriately regarded contributing to healthy and nutritious balanced diet. Fisheries sector, if properly managed, is also less harmful to environment than production of red meat such as beef. Fish provides around 3.3 billion persons globally about one-fifth of daily animal Protein 2.

This column provides a brief exposure to the recently launched PMMSY (Pradhan Mantri Matsya Sampada Yojana) Initiative. 21 states are participating in the initiative. The initiative aims to modernise the fisheries sector and enhance India’s global presence in the sector.

A report by Omnivore, entitled, “The future of Indian Agriculture and Food Systems: vision 2030”, argues that there will be eight trends that will disrupt the status quo of the Indian agricultural system by 2030, while meeting the objectives of climate-smart agriculture 3. Among the eight, two specifically apply to the fisheries sector.

The same report estimates than in 2018, value added in agriculture sector was $150 Billion in crops; $70 Billion in livestock and poultry, and $16 Billion in Fisheries.

Before outlining the PMMSY initiative, it may be useful to provide an overview of trend in global fisheries and aquaculture sector and India’s current role.

India in the Global Fisheries and Aquaculture Sector

The Report divides fisheries sector into two components, they are “capture”, involving both marine and inland production; and aquaculture. Aquaculture is the breeding, rearing, and harvesting of fish, shellfish, algae, and other organisms in all types of water environments. Pisciculture involves only the culture and rearing of fish

This section relies on the 2020 Report by the Food and Agriculture Organization (FAO) titled “The State of World Fisheries and Aquaculture”. The data in the Report are for 2018 4.

The report estimates that India’s fish consumption is between 5 and 10 Kilograms per year; and India’s fish protein intake per person per day is less than two grams.

India accounts for 4% of global exports, third largest after China (14%) and Vietnam (5%).

The report however projects that between 2018 and 2030, India’s exports are expected to decrease by 3%, and imports increase by 96%.

The above overview strongly suggests that India should take initiatives, consistent with Atmanirbhar Bharat Abhiyaan (ABA)and Be Vocal for Local (BVFL) strategic ideas, to modernise India’s fishing sector and enhance its role in the global fisheries sector in an environmentally sustainable manner.

Asher and Soni argue that ABA, whose literal meaning is Self-Reliant India Movement, should be in the context of India being highly globally integrated, and India pursuing further integration based on enhanced global competitiveness and competence.  BVFL is designed to bring about attitudinal and behavioural change about value-addition generated to activities and products by domestic and foreign entities within India5.

It is the above context that the PMMSY initiative has been launched. The initiative does incorporate the three overarching premises underlying agriculture sector reform noted above.

The PMMSY initiative is expected to revolutionise the fisheries sector as it will invigorate it with the latest technology, infrastructure and ensure financial assistance, while improving sustainability.

The initiative is be implemented during a period of five years from FY 2020-21 to FY 2024-25. It consists of two components namely, Central Sector Scheme (CS) and Centrally Sponsored Scheme (CSS) at a total estimated investment of INR 201 Billion, comprising of Central share of INR 94.6 Billion, State share of INR 48.8 Billion, and Beneficiaries’ share of INR 57.6 Billion.

The PMMSY initiative is expected to establish a robust fisheries management framework and check gaps in the value chain. It is hoped that initiative will also help reduce wastage of fish production.

The Government has made it clear that 'Blue Revolution' or `Neeli Kranti’ and has the potential to attain the first place in the world in fish production. It includes MoFPI (Ministry of Food Processing Industries) schemes such as Food Parks, Food Safety and Infrastructure.

It is estimated by the authorities that the PMMSY initiative is expected to increase fish production by 0.7 million tonnes, and increase exports to INR one trillion (USD 13.3 Billion) by 2024-25. The estimated additional livelihood generation is o.55 million.

The government has set a fish production target of 15 million tonne by 2020 under the Blue Revolution, and raise it to about 20 million tonnes by 2022-23. These are significantly higher targets than projected by the FAO Report noted above.

The importance of fisheries in the public policy agenda is also underlined by the creation of separate Ministry for Fisheries. It will facilitate dealing with various issues concerning fisheries.

The PMMSY initiative fits well with the broader and much larger Blue Economy program of the government.

A key component of the Blue Economy program in India is the Sagarmala program, initiated in 2016. It aims to use port-led development as an additional growth-node and as an avenue to expand exports.

There are 12 major ports and around 200 notified non-major ports in India. The navigable waterways are 14500 KM, with a coastline of 7500 KM, involving 13 (out of 36) States and Union Territories.

It aims to change India’s modal mix, increasing the share of coastal and inland waterways in India’s total cargo from 6% in 2015 to 12% by 2025. Under the Sagarmala program, 577 projects, with an estimated project cost of INR 8700 Billion (USD 126 billion) have been identified for implementation between 2015 and 2035 continuing 6.

In NITI Aayog’s 2020 Export preparedness index, among the top five states, four were coastal states. This underlines the importance of the Blue Economy program and of PMMSY.

The PMMSY is a very timely and well-integrated initiative for the fisheries sector which has been usually neglected. The initiative however needs to be documented in much greater detail. Only broad outline is so far available.

The initiative needs strong Monitoring and Evaluation (M & E) system, preferable located in NITI Aayog. Such a system in turn requires robust system of data collection, data analytics and other capacities. Moreover, the data should be accessible widely so that researcher and policy analysts get opportunities to provide empirical-evidence based inputs to policy makers, as well get academic publishing opportunities. It is not clear to what extent these have been integrated in the PMMSY scheme. If not, urgent consideration should be given to this aspect.

The initiative involves the Centre, participating states, and beneficiaries. Therefore, coordination between them is essential. The coordination mechanism needs to be more explicitly considered and made available.