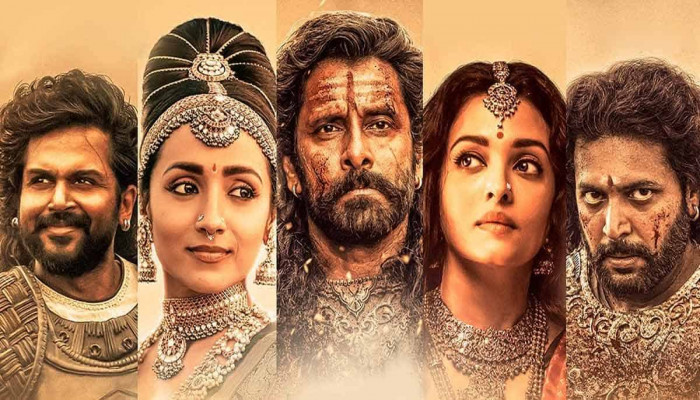 My wife and I had the misfortune of watching Ponniyin Selvan this evening. It's one of the most terribly boring movies ever made. The story-telling lacks coherence. The dialog is pathetic. The music is so boring that not one song would register in your mind. I think the last song of A R Rahman which is worthy of listening to is Bhoomi Bhoomi, which he composed in 2018. The theater was virtually empty this evening when we went out to watch the movie. None of the actors is competent. The movie is packed with repeated ridicule of Brahmins. In one dialog, the cast refers to Sri Madhusudana, an epithet of Vishnu. The English subtitle renders it as "the wine god." I don't believe it is an inadvertent mistranslation.

Some of you may argue that many of such negative portrayals are to be found in the original novel of Kalki itself. Partially true. For the record, I never found Kalki to be a competent or intelligent writer. He wrote some of the most pitiable historic novels. For example, in one of his works, he would discuss the caves of Sittannavasal and Sigiriya and raise the question of the dye used for cave painting. Yet, throughout the novel, there won't be any insight or inquiry into how the dye was extracted from plants. Instead, a reader would be served highly algorithmic prose and sentimental nonsense with no historical insights.

Kalki won't even inquire why the Sittannavasal cave was built in the first place. Built in the 6th century, it housed Jaina monks. Many of them would just meditate until they reached the vegetative state and then die in the cave. What prompted them to undertake this seemingly extreme penance? The reason won't elude a curious mind because Jaina munis attempted to build similar caves in Hampi and Khajuraho too. Many of those are in partial states of perfection, an indication that the Jainas were experimenting with meditative techniques which included sound resonance. The pedestrian prose of Kalki won't even prompt such questions in the minds of the reader.

If one wanted to look for real works of genius by Kalki then one must look at such lyrics as "Kaatrrinile varum geetham." His prose and historical novels were pedestrian at best. Let's be clear about one thing. Kalki was no Gore Vidal or Robert Graves. They packed their historical novels with facts and sharp reason while making them utterly readable.

Take Vidal's Julian, the pagan king who wanted to eradicate Christianity. You would be transported to the fourth century CE. No detail which Vidal presents would be anachronistic or lacking in historical rigor. The narrative would be gripping. It's impossible for the reader not to sympathize with the brilliant, philosophical, and youthful romantic philosopher-king Julian even though Julian is fighting a losing battle. You won't find anything comparable in the writings of Kalki, who is to be admired for only one thing, i.e., for introducing the genre of historical novels to Tamil readers.

The movie merely managed to take the otherwise pedestrian novel of Kalki further down. There's not a single scene in which the director, crew, and dialog writer have displayed even a modicum of passion for excellence, story-telling, or histrionic skills. Take the sword-fighting scenes for example. Contrast those with the sequences in Troy, where Brad Pitt mesmerizes with a muscular and brooding presence with his dramatic portrayal of Achilles.

In Ponniyin Selvan, by contrast, you have potbellied Dravidian thespians gasping for breath while just lifting the sword. Doesn't anyone tell our Dravidian heroes that it's the sword, not the Dravidian potbelly, which must be thrust? The dialog, written by Jeyamohan, is pathetic. It's as if the script-writer couldn't even transport himself to the Chola era and pen dialog which would transport the viewers to that period. There's a shocking inaccuracy when it comes to things historical. For example, there is a scene in a movie where the fort is getting breached and gunpowder is being set ablaze. Chola kings didn't use gunpowder. In fact, even as late as the era of Krishnadeva Raya, Indian kings distrusted gunpowder. Even a high schooler would know this much!

One of the worst movies ever made. It's rare to come across a movie that fails on every single count, i.e., story-telling, music, and dialog. Ponniyin Selvan has the rare distinction of being an abject failure in every one of these aspects.