PMâs Security Breach, a Severe National Security Concern that calls for an Upgrade and an Evaluation 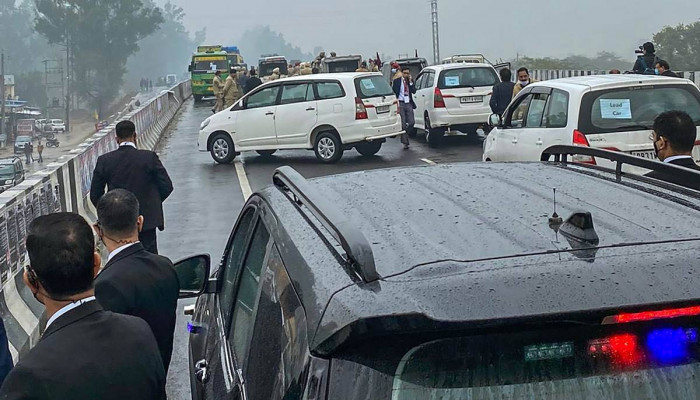 What happened to the Indian PM cavalcade on a flyover between Bhatinda and Ferozepur, was not an ordinary event. Some of us may just view this event from political lens. But that will be just myopic view. Political rivalry is one thing and national security, security head of government is altogether a different thing. It was not just a cavalcade of a political leader entering a state that is ruled by opposition party, but of a Prime Minister of the largest democracy. PM of a country of 1.3 billion with a grand global stature. According to Statista, India’s real gross domestic product (GDP) growth rate in 2021 was 9.5%, indicating India had a robust economy that weathered the impact of Covid-19 pandemic well.

The assassination of heads of state has been part of history, and that included- presidents, prime ministers, senators, and ministers. History of assassinated and executed heads of state are reported since 2270 BC. Ever since, several hundreds of such assassinations have occurred and most of those point to a fact that an imbalance between power and security gives an opportunity to assassins.

One of the most common ways of fighting of asymmetrical war these days is by leveraging security gaps and conspiring and executing assassination of state leaders. Sometimes it is done by individuals and sometimes it is state sponsored. Majority of times such assassinations led to state’s instability which in turn led to a significant and non-collateral damage to the country. Assassination of a leader not only makes huge dent on country’s geopolitical position but also it inflicts profound damage to the psyche and moral of citizens of the country.

Assassinations of two presidents of the United States have taught us three things- first, that any leader who embark on radical changes in the interest of downtrodden, poor and deprived, the ones who exploits them becomes enemy of that leader. Second, if security lapses are ignored and left unmitigated, mishaps happen and third, that once security of state head is escalated above the level of risk, chances of assassination diminish to zero. It has been decades since the United States has encountered any issue with security of its state heads, not even any foiled attempt. It is logical to argue that the United States is a rich country and can afford to have any amount and any kind of security. It is not true.

In 1963, annual GDP of the United States was merely $637,500 million which was only growing at a rate of 4.4%. Despite that USA chose to ramp up security of its state head, and since then no mishap with state heads have been reported. Per news sources, in 2021 US government allocated $120 million to fund the president's security and that includes $60 million for the U.S. Secret Service, and $60 million for policing services. This is an enormous amount and unaffordable for many countries.

Let us look at it from a different perspective. Given the GDP of US in 2021 was $22.9 trillion, which makes this expenditure 0.000524017% of its GDP. Proportionately the amount incurred appears way too low.

Indian PM was trapped for good 20 minutes on a flyover, of course in a very precarious and dangerous situation. It is, therefore, imperative to review whether the security set up for the state head was adequate.

It does not take much to execute an assassination plan, especially when security lapse is big. The assassin has to develop a certain level of hatred and some planning. Just recall assassination of Abraham Lincoln, the16th president of the United States (1861–65). Abraham Lincoln was pivotal in the emancipation of the slaves. But John Wilkes Booth, who was a supporter of slavery, developed severe hatred for Abraham Lincoln, and that resulted in the assassination of the president Abraham Lincoln. Booth admitted that he had a plan for abduction of President Lincoln, and he made a gang of coconspirators in Washington, D.C. Several attempts to abduct President Lincoln failed, but he never gave up. Eventually, his gang worked on a tipoff and got access to the theatre where Booth shot Lincoln on the back of The President’s head. People reasoned that since Booth had hatred this mishap happened; they were reluctant to ascribe it to a security lapse.

Security lapse allowed another assassination of President John F. Kennedy. Lee Harvey Oswald shot a bullet on November 22, 1963, from a window on the sixth floor. Notably, Oswald got a mail-order rifle and an opportunity when President chose to travel in an open-car motorcade in Dealey Plaza. Who would have imagined that a very popular leader of US who called upon Americans “to bear the burden of a long twilight struggle against the common enemies of man: tyranny, poverty, disease, and war itself” would have elicited enough hatred that would result in his death? So, nothing can be taken for granted. Yes, Nothing!

We remember the world leader who once said, “I Have a Dream.” Martin Luther King, Jr., a Nobel Peace Prize winner of 1964, who led civil rights movement (mid 1950s) in the United States to end the legal segregation of African Americans in the South and other parts of the United States. King rose to national prominence as head of the Southern Christian Leadership Conference, which promoted nonviolent tactics, such as the massive March on Washington (1963), to achieve civil rights. But there was a person, James Earl Ray, teeming with hatred shot Martin Luther King, who was standing on the balcony of a motel room.

Most of the countries arrived at a conclusion that they cannot, inadvertently in any situations, take security of top leader of their countries for granted. US followed that as a dictum and never faced any situation for last several decades. Not that India needs to follow any country, but it might be helpful to take a close look at the security arrangement for the President of the United States, to assess security gaps that might have existed in the 20 minutes dangerous stand off on a flyover that was not far from Pakistan border.

In US, the President’s cavalcade is known as Motorcade that primarily consists of a Route Car, a Pilot Car (the probe running on whole route), a Sweepers cars or bike (clearing route for unobstructed movement), a Lead Car (secret agent and top coveted security who are hard wired to the national security), Presidential Limousines (a couple or more to camouflage).

In addition, usually a pair of Presidential Airlift helicopters is also deployed, and they are used if need arises, and that involve a pair of “Marine One” VH-3D Sea Kings or VH-60N Black Hawks (Marine Helicopter Squadron 1). When we evaluate the cavalcade configuration of Indian PM, it is obvious that no route car or probe car was deployed, so the rest of the team had no clue what they would face down the line. In absence of any Sweepers car, mob build up to accomplish its agenda couldn’t be assessed.

The US Presidential Limousines is also called “The Beast”, for a pragmatic reason. The Beast’s defense capabilities include a sealed cabin with an independent air supply capable of enduring a nuclear-biological-chemical (NBC) attack, and even a supply of the President’s blood type, surrounded by top-level ballistic armoring, and aided with night vision/infrared driving systems, infrared smokescreen, and oil slick deployment capability, as well as tear gas dispensers. It is prepared for any eventuality. Those who think that a secure travel for PM in Punjab was dubious, they may change their view as how successfully the US President’s Motorcade travelled in Iraq. The security system of the Motorcade was improvised, they deployed armored Humvees as sweepers and brought suburban SUVs specially modified for the purpose that had sticks attached to the top that served as aerials for improvised explosive device jamming equipment. The Indian PM’s cavalcade was at the mercy of the mob. In addition, no aerial assistance was provided though the Bhisiana Air Force Station, Bathinda was in the vicinity.

The Secret Service agents that drive the US Presidential limousines go through constant drills at the Secret Service’s sprawling James J. Rowley training complex, including defensive and offensive driving courses, as well as elaborate life-like tactical scenarios that bring all the elements of the motorcade together to defeat or evade any kind of threats. It may be the part of tactics but staying stuck on a structure which is not guarded can make anyone nervous. Not sure how they can explain what their security strategy is in that kind of situation. We did see best of the best security guards giving full cover to PM’s car, but that was mostly covering arir or the surface. What about few feet down the flyover concrete? Wasn’t that remained totally unchecked while PM’s car was vulnerably up there? Didn’t that left the whole security compromised? If tractors and mob could access the flyover, detonators could have reached there as well. Don’t know how not one thought about it and activated SOS and extracted the PM?

The brain of the security system of US President’s Motorcade, Marine Special Operations Command (MARSOC) is trained in a wide variety of tactics to either engage or evade threats on the road. Given the situation on the flyover, they surely would have already executed the protocol of combat or evacuation to save the leader and retain the pride of the country.

In tandem with the Beast, the motorcade has a Control Vehicle and Support Vehicles to carry security detail and ensure their effective execution. The Control Vehicle harbors a top military aid with the highest level of clearance, who would assist the Commander-in-Chief during a major military incident, giving operational guidance, and if necessary, activating the “Nuclear Football.”

The US President’s motorcade has the Secret Service's Counter Assault Team (CAT) tasked with curbing any potential security threat also initiates ordering an air evacuation if needed. It also has an Intelligence Division Vehicle (ID Car) that works on wider but critical strategy of involving intelligence decisions covering communication with all surveillance units and local police. They are responsible for gathering intelligence about threats or obstacles along the motorcade's route. In addition, the motorcade has a vehicle called "Roadrunner", which is The White House Communications Agency Vehicle, that houses a very effective satellite communications set up and provides uninterrupted communication (big rolling data encryption center, Wi-Fi hotspot, radio repeater and doomsday communications) with all command centers through an encrypted voice, internet and video communications via the Pentagon’s constellation including communications about nuclear arms release.

Key role of Roadrunner in motorcade is to ensure secure communications within the motorcade. In case of stranding, the roadrunner would have triggered SOS in a matter of seconds. As other supporting paraphernalia for the US President travels, the Secret Service gets full support from the Department of Homeland Security helicopter, Coast Guard, Border Patrol, US Customs, or other federal government chopper that provides intelligence, planning and over-watch and as needed aerial support.

Stranding of Prime Minister’s convoy on a flyover has clearly exposed major security lapses and it must be thoroughly investigated. Coming close on heels after the fatal crash of CDS helicopter and Gurupatwant Singh Pannu (Sikh for Justice, Canada)’s viral video stirring up Khalistani movement, this is a matter of serious concern.

We can’t afford to ignore this episode of security breach to smooth passage of PM’s convoy that pertinently points to overt and covert threats to the leader of the country who is a force to recon with.