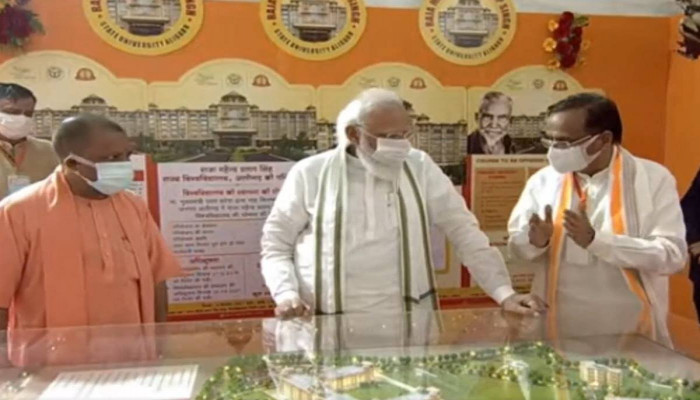 “As we celebrate Azadi ka Amrut Mahotsav, honest efforts are being made to make the young generation aware of contributions of Raja Mahendra Pratap Singh and others in our independence struggle,” Prime Minister Modi remarked, also highlighting that the late king allotted land for the Aligarh Muslim University (AMU).

“As a prime minister, I consider it my good fortune that I am laying the foundation stone of a university named after such a visionary,” PM Modi said.

The university is being established by the Uttar Pradesh government in the memory and honour of Raja Mahendra Pratap Singh, the great freedom fighter, educationist and social reformer.

It is being set up in a total area of over 92 acres at Lodha village and Musepur Kareem Jarouli village of Aligarh's Kol tehsil.

The university will provide affiliation to 395 colleges of the Aligarh division.

Talking about the defence corridor, PM Modi said that India is moving ahead with an aim to carve its identity as a global defence exporter, unlike earlier when the country only used to import defence goods.

He also made an analogy between the famous locks of Aligarh and the defence corridor, saying that the city is now contributing towards protection of country's borders as well. PM Modi then announced â¹9000 crore for the development of BrahMos missile at the defence corridor's Lucknow node.

“There was a time when the administration was run by goons and mafia arbitrarily. But now the extortionists, those running the mafia raj are behind bars,” said PM Modi.

The Prime Minister's visit to Aligarh is being seen as the launch by the ruling BJP of its campaign for the upcoming assembly elections in the country's most populous state, likely to take place early next year.