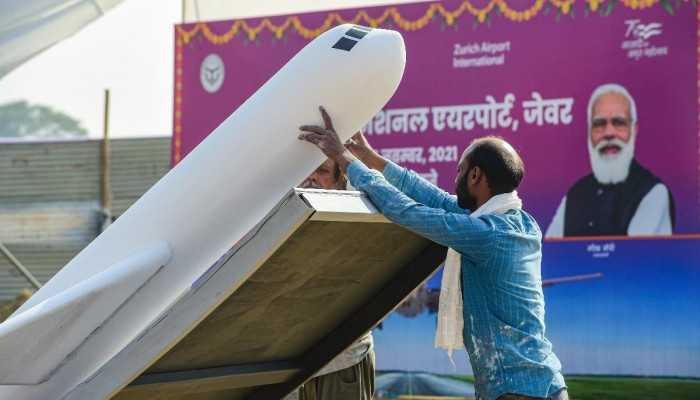 Construction work for the airport has begun, and its operations will begin by 2024. Once it becomes operational, Uttar Pradesh will have five international airports, the highest for any state in India.

"25th November is a major day for India's and Uttar Pradesh's strides in infra creation. At 1 pm the foundation stone of the Noida International Airport will be laid. This project will significantly boost commerce, connectivity and tourism," the PM tweeted.

Chief Minister Yogi Adityanath said he expects investments of over Rs 10,000 crore after the first phase and up to Rs 35,000 crore once the airport is fully built.

Union Civil Aviation Minister Jyotiraditya Scindia has claimed the Noida airport will be Asia's largest and will generate employment opportunities for more than one lakh people.

In a statement issued on Wednesday, the centre said the development of the airport was in line with the Prime Minister's vision of creating a "future-ready aviation sector".

The airport will be about 72 km from Delhi's Indira Gandhi airport - the only other international airport in the national capital region. It will be about 40 km from Noida.

The airport, however, has run into controversy over protests from farmers whose lands had been acquired for construction. They have camped in tents 700 metres from the airport. A local BJP MLA admitted land had been acquired in a hurry.

Fully operational, the Noida International Airport is expected to serve around 1.2 crore passengers per year, with Delhi, Noida, Ghaziabad, Agra, Faridabad, and nearby areas set to benefit. It will also decongest traffic in and around IGI airport, the centre has said.

Connectivity will be handled by a "multimodal transit hub" with metro and high-speed rail, as well as taxi and bus, services. Noida and Delhi will be linked via "hassle-free metro services" and major roads will link the airport to other cities, the centre said. The cargo terminal will have a capacity of 20 lakh metric tonnes, that can be expanded to 80 lakh metric tonnes.

"The design of the airport focuses on the convenience of passengers. Processes at the airport will be digitally enabled. We're working towards being a net-zero carbon emission airport and aim to be operational by September or October 2024," Kiran Jain, the chief operating officer of the airport, said.

Uttar Pradesh has eight operational airports at present, including international airports in Lucknow and Varanasi (Prime Minister Modi's constituency). A third was inaugurated at Kushinagar (a Buddhist pilgrimage site) last month and fourth one in the temple town of Ayodhya.