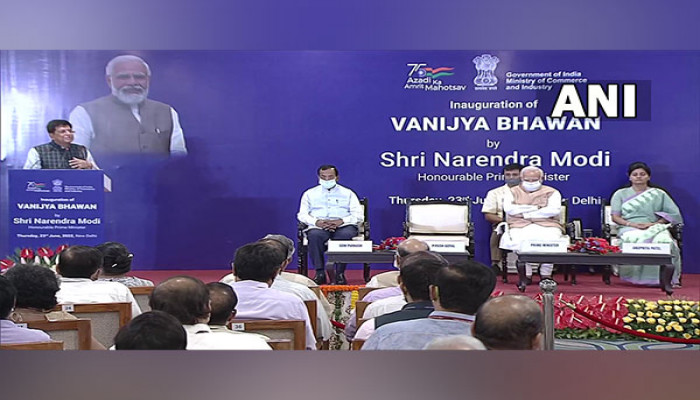 On the launch of new premises of Ministry of Commerce, and NIRYAT portal, PM Modi said, "It will bring positive changes in the field of trade and commerce...especially for MSMEs."

Speaking about the Vanijya Bhawan, Union Commerce Minister Piyush Goyal said, "This is a digital building, it won't have the typical pile of papers."

NIRYAT is a one-stop platform for stakeholders to obtain all necessary information related to India's foreign trade. Constructed near the India Gate, Vanijya Bhawan has been designed as a smart building, incorporating the principles of sustainable architecture with a special focus on saving energy.

It will work as an integrated and modern office complex, which will be used by two departments under the commerce ministry including the department of commerce and the department for the promotion of industry and internal trade.

The building's layout was designed to minimise the number of trees that would have to be taken down. More than 56% of the 214 trees on the plot are either being left alone or replanted on the same plot.

Approximately 70% of the large trees have been preserved. In addition, 230 new trees are being planted on the same plot, ensuring that tree cover on the site will expand when the new building is built.

The building is 19233.745 square metres in size and strictly adheres to Central Vista standards. It is anticipated to house around 1,000 policemen and workers.

The Vanijya Bhawan will include all current technology-driven amenities while keeping the Central Vista design.

It was believed to be a paperless workplace with cutting-edge features including smart access management, central air conditioning, video conferencing, and fully networked technology.

It is a green building that has received all necessary certifications.

The new building is seen as a symbol of not only India’s growing economic might but also the adoption and use of technology in governance in India.