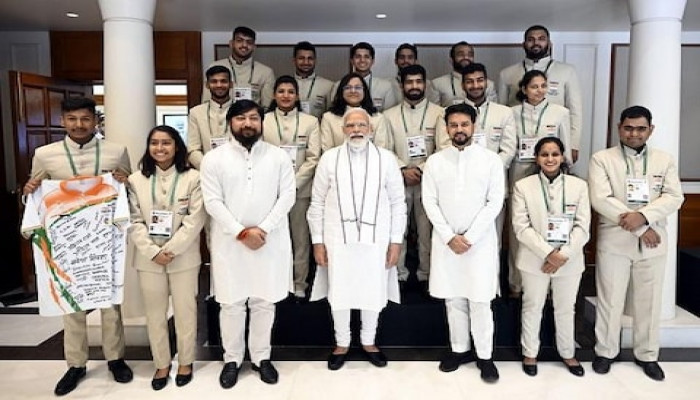 Prime Minister Narendra Modi on Saturday hosted India's Deaflympics contingent which produced its best-ever performance in the event held in Caxias do Sul, Brazil, from May 1 to 15.

During his interaction with the athletes, Modi said the athletes have brought pride and glory to the nation.

"I will never forget the interaction with our champions who have brought pride and glory for India at the Deaflympics. The athletes shared their experiences and I could see the passion and determination in them. My best wishes to all of them," Modi tweeted after hosting the athletes at his official residence.

"It is due to our champions that time's Deaflympics have been the best for India!"

The event was also attended by Sports Minister Anurag Thakur.

Badminton player Jerlin Jayaratchagan was one of the biggest stars for India at Deaflympics 2021 as she won as many as 3 gold medals. Shooter Dhanush Srikanth bagged 2 gold medals. Tennis player Prithvi Sekhar was also a multiple medalist with 2 medals.

Wrestler Virender Singh won his 5th straight medal at the Deaflympics - a bronze.

For the very first time, the Indian Deaflympics team finished amongst the top 10 nations in the event with 16 medals, a huge jump from just five in 2017. In Brazil, the Indian contingent won in five of the 11 sporting disciplines.