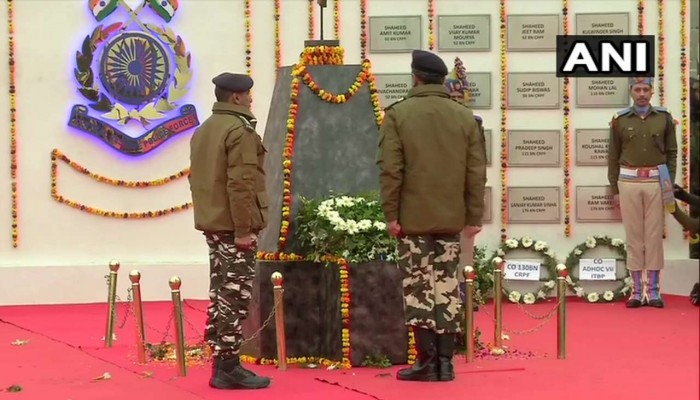 Like well being of a person who consumes Kalakuta (fatal poison) not seen in this world in the same manner one who speaks lies never gets fame, friends, merit and prosperity.

On 14th of February nation observed first anniversary of Pulwama terror attack and remembered the sacrifice of 40 CRPF Jawans.

On a day when political class should have shown unity and resolve to fight terrorism and keeping the country safe from any adverse situation, people of the country once again witnessed the nasty and insensitive display of politics that is going on in this country for the past fifteen years which has hurt country a lot.

In a democratic setup, fixing accountability of the government and asking toughest questions is not only healthy but also duty of political parties, other aware citizens and experts but not at the cost of national interest and by hurting the morale of security forces.

In the past fifteen years a very dangerous trend of politicizing national security has taken roots in this country. Instead of decent, disciplined, dispassionate debate and discussion on various aspects of national security, political parties are indulging in harmful vote bank game which always ends up in giving our adversaries undue advantage. Same thing happened on Pulwama attack anniversary when the leader of main opposition party and some other leaders indulged in such politics once again. I will try to address their points and ask some questions in this article.

This was one of the biggest terror attacks in Jammu Kashmir since 2000 in which a suicide bomber was involved. Soon after the attack JeM took responsibility of the attack and released a video.

Masood Azhar is the same terrorist who was released after IC-814 Indian Airlines plane hijack.

After the Pulwama attack PM Narendra Modi stated that those who orchestrated this attack have done "a big mistake" and "they will pay a heavy price".

Twelve days after the gruesome attack on 26th February after getting precise intelligence inputs, Indian Air Force conducted an air strike on a JeM terror camp situated in Balakot on a hilltop in the Khyber Pakhtunkhwa province of Pakistan.

In this air strike large number of terrorists, trainers and their commanders were killed. This camp was headed by Maulana Yousuf Azhar (alias Ustad Ghouri) brother-in-law of Masood Azhar. Bharat termed it as a 'non-military' 'pre emptive' ' intelligence-led' operation to neutralize the threat of other suicide terror attacks being planned by JeM in different parts of country. This is first time IAF was used for anti-terror operation.

IAF after decades entered foreign air space for a mission and successfully completed it without any hiccups and loss of man or machine.

Bharat launched aggressive diplomatic offensive and got Maulana Masood Azhar declared global terrorist by UNSC's 1267 committee in May 2019. Pakistan was internationally exposed and isolated for promoting and practicing terrorism as a state policy because of active and continuous diplomatic efforts of Indian government especially after Pulwama Attack.

After the Pulwama attack NIA began investigation and registered case on 20/2/2019. NIA identified the suicide bomber, his local handler and the vehicle provider. NIA also identified the vehicle used for the attack and traced its original buyer and purchase trail. The explosives used in the attack were found to be Ammonium Nitrate, Nitroglycerin and RDX.

According to the investigation so far, the main planners of the attack are in Pakistan. Mudasir Ahmad Khan arranged explosives, Sajjad Bhat provided vehicle and Adil Ahmad Dar executed it. NIA faced difficulty in finding out how explosives reached in the hands of terrorist and encountered difficulty in investigation as crucial evidence was washed away due to heavy rain at the site of the attack the next day. Since the attacker and his handlers are dead, agency couldn’t file a charge sheet yet.

NIA faced similar difficulties while investigating 2016 Pathankot Air Base attack conducted by JeM as all four terrorists got killed in the operation. According to Unlawful Activities (Prevention) Act the investigation agency has 90 days to file a charge sheet in court but this can be extended if the suspects are dead or additional time is required.

Security forces too have learnt lessons from this attack and made changes in their training, strategies, tactics, mobility and navigation. Earlier the frequency of convoy movement used to be very high.

Earlier 180 vehicles moved as a single, now it is close to 48. Previously movement 70% movement is by road but now it is by air. Vulnerable stretches on the Jammu-Srinagar highway are monitored by surveillance cameras. After identifying the lapses in internal probe all such changes have been made.

Neither Indian government nor Security forces are in any kind of denial about lapses but that does not mean they should start shouting about them from rooftops. Those who have doubts should understand this instead of spreading rumors.

For decades Bharat faced proxy war by Pakistan which have policy of bleeding Bharat by 'thousand cuts' created by Zia-Ul-Haq former Pakistan Army General and President. Time period from 2004-2014 proved to be golden period for Pakistan and its terror organizations. Every year in this decade Bharat witnessed terror attacks in the form of serial bombings across the country. Mumbai, Delhi, Hyderabad, Bengaluru, Ahmadabad, Pune, Jaipur, Varanasi and many other places were rocked by bomb blasts and blood of innocent people spilled on the roads. In these ten years at least 44 major terror attacks took place in which 895 people killed and 3168 people got injured.2008 was the most horrific year in which nine attacks took place.

Most brutal attacks occurred on July 11 2006, followed by serial blasts in local trains in Mumbai and November 26th 2008 attacks.

During this period the security situation was in such a bad shape even Prime Ministerial candidate, CM of Gujarat at that time, Narendra Modi's rally in Patna was targeted by terrorists.

In 2007 terror organization Indian Mujahideen with links to LeT and Pakistan's ISI was created. It conducted attacks in different parts of the country.

In 2006 PFI a radical Islamic and extremist organization came into being which is now under investigation for various unlawful activities across the country. In this period separatist leaders of J&K nurtured and funded by Pakistan enjoyed hospitality in Delhi and shook hands with Prime Minister.

Genuine encounters of terrorists were labelled as fake by people in power. Security forces were shackled and demoralized to take any stern measures against terrorist, after 26/11 people in power denied request for punitive measures by IAF against Pakistan's terror bases. Fake stories of military coup were planted.

In 2005 highly sensitive information of Indian Navy's future plans and preparedness got leaked and reached to foreign agencies and arms companies which is known as Navy War Room Leaks.

People in power during this period even tried to communalize army by trying to quantify Muslims in Army.

Left Wing Extremism too surged in this era and claimed more than 6000 lives. In April 2010 Naxals killed 75 CRPF jawans in Dantewada.

In May 2013, a convoy of INC leaders was attacked by Naxals in which many senior leaders died.

On all counts, period of 2004-2014 was a nightmare for the country in terms of peace and security.

Those who are questioning about lapses, should reflect how they messed up national security.

Those who are asking questions about who got benefitted by Pulwama Attack, doubting the integrity of the current leadership and trivializing the sacrifice of forces and mocking emotions of the people of this country, their track record in power and in opposition is not only pathetic but highly suspicious and questionable.

This country paid heavy price for in terms of loss of life and reputation.

I have some counter questions to the questioners.

Who benefitted by not buying next - gen fighter planes for IAF?

Who benefitted by leaving army wanting for modern arms and ammunition?

Who benefitted by not creating CDS?

Who benefitted by not implementing OROP for decades?

Who benefitted by creating false narrative of Hindu Terror?

Who benefitted by questioning Surgical and Air Strikes?

Who benefitted by doing track two diplomacy with Pakistan?

Who benefitted by secretly meeting Chinese envoy during Doklam Standoff?

Who benefitted by questioning authority of Indian Parliament to abrogate Article 370 and 35A?

Who benefitted by insulting Army Chief?

Who benefitted by supporting secessionist and break India forces?

Who benefitted by trying to sabotage Rafael fighter jet deal?

For decades India has been facing terrorism, naxalism and braving the pain and sufferings caused by them.

People have lost patience and are in no mood to accept dirty politics over national interest and security, sooner the political parties and leaders realise this fact better it will be for the country and political parties.

History is not kind to those who betray their own country and people.