No trade-off with core interests: India pulls out of RCEP 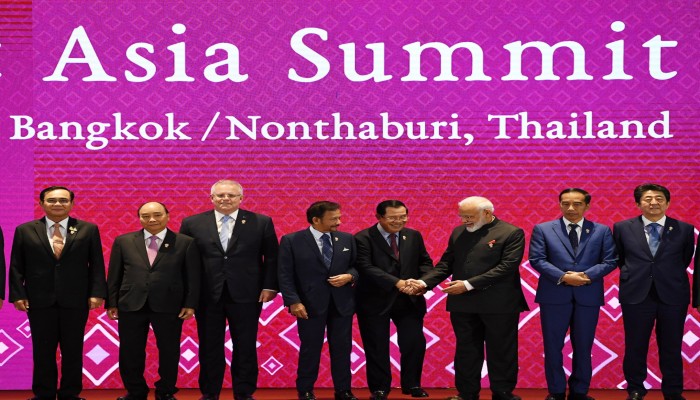 Ending the impasse over RCEP (Regional Comprehensive Economic Partnership) at the 3rd RCEP summit, Thailand, Prime Minister Modi pulled India out of the trade deal which includes 16 countries, accounts for 35% of the global trade and half global population. He announced, “Our farmers, traders, professionals and industries have stakes in such decisions. Equally important are workers and consumers, who make India a huge market and the biggest economy in terms of purchasing power parity. When I measure the RCEP agreement with respect to the interests of all Indians, I do not get a positive answer. Therefore, neither the talisman of Gandhiji nor my own conscience permit me to join RCEP”.

Initiated in 2012, the multilateral trading bloc, RCEP includes 10 ASEAN members- Indonesia, Malaysia, Singapore, Thailand, Myanmar, Philippines, Brunei, Cambodia, Vietnam, Laos and its FTA (Free Trade Agreement) partners- China, Japan, South Korea, Australia, New Zealand and India. India which was part of the trade negotiations since its inception decided to pull out after 29th round of talks. The group comprising of Asian Tiger economies with a proven record as robust market economies fervently batted for a trading block that could augur their trade interests. After India’s slow growth in the last quarter and lower growth projections by financial agencies, analysts argued, RCEP can open up new avenues for investments and trade providing much needed impetus for the Indian economy. By opting out of RCEP, they contended India missed becoming part of sophisticated global export chain and investment opportunities.

Interestingly, unlike other RCEP countries, India has fledging manufacturing ecosystem with service sector fuelling India’s growth. Of the 15 RCEP countries, India has trade deficit with 11 countries which account for $105 billion of which China alone accounts for $53 billion. China a manufacturing bulwark evolved into an economic superpower is currently steering the RCEP negotiations. Apparently aware of India’s hesitation to join the RCEP which can hardly cater to India’s interests, President Xi at Mahabalipuram informal summit pledged to address India’s concerns. But nothing changed on board.

China’s mercantilist policies and its denial to allow reciprocal access to its markets despite spiralling trade deficits over the years turned India into a dumping yard for cheap products. After a decade of requests, at the height of the trade tariff war with China, Beijing relented to provide market access to India’s non-Basmati rice last year. Access protocols for tobacco leaves and chillies concluded just recently. India which lacks competitive manufacturing ecosystem has abysmal record of trade exports with various FTA partners. Indeed, industries and manufacturing sector which accounts for 31% of its GDP is a distant second with service sector contributing as much as 54% of GDP. Services form the huge chunk of India’s trade and is the key driver of India’s economy. They account for 38.4% of India’s total exports. Services is the only sector where India has trade surplus. Even IMF recently suggested that services trade could fuel India’s trade engine. Interests of skilled workers employed by service sector will be undermined if access to services trade is hampered.

Ever since India signed goods FTA in 2009 with ASEAN countries there has been a significant rise in ASEAN imports to India while Indian exports hardly registered any increase. Upon India’s persistence, ASEAN agreed to sign services and investment FTA in September 2014 but Indonesia and Cambodia didn’t ratify the agreement on the pretext of Indian professionals flooding their markets. Similarly, even China continues to fiercely resist market access to India’s services sector, engineering and pharmaceuticals. Currently, India’s trade deficit in goods and services has increased to $103.63 billion from $84.45 billion despite India’s positive surge in exports.

Among the major reasons for India’s withdrawal from RCEP has been lack of assurances on market access, non-tariff barriers and threat of China flooding Indian markets. Auto-trigger mechanisms to protect countries from surge in imports are not clearly defined. Secondly, RCEP set 2014 as the base year import duties as against 2019 when India increased import duties on several goods to protect its domestic manufacturing. The losses accrued from such a scenario would inflict severe losses to Indian trade and counterintuitively impact India’s “Make in India” initiative. Further stringent rules to track the origin of the goods isn’t worked out. So effectively China can re-route its products from other RCEP countries and continue to inundate Indian markets. Above all, RCEP failed to offer a better deal for India’s mainstay- services sector through better mobility of professionals.

Another area of major concern has been agriculture and dairy. With RCEP in place dairy products from New Zealand will penetrate Indian markets throwing the livelihoods of millions of Indian marginal farmers out of gear. This will potentially exacerbate the rural distress. With the threat of cheap imported products inundating Indian markets looming large, domestic manufacturers and farmers opposed RCEP. Unlike in the past when Indian leadership caved into pressure from global powers, India reiterated that RCEP in the present form failed to “reflect the basic spirit and the agreed guiding principles” and pulled out. Previous lopsided FTAs have entailed burgeoning trade deficits. But a defiant India now refused to succumb to Beijing’s indifference.

After its decision on RCEP, India affirmed that it is open for business and sought to have bilateral trade agreement with trading partners. Close on heels, India is on the brink of signing FTA with Mauritius to gain access to Africa where China has massive foothold. India is intent on expediting stalled trade agreements with Australia and the EU. While parallels are drawn between India and the US for pulling out of trade deals, RCEP and TPP respectively. Analysts, allude that both will stand to lose their significances after severing ties with multilateral trade agreements. Being second largest economy in Asia on PPP basis, RCEP countries desire India to be on board. Despite the RCEP, ASEAN will continue to look towards India as a counter balance to hegemonic China in the region,

While economic rationale guided India’s decision experts believe that this will have major geopolitical consequences. RCEP’s success will position China as a winner. By consequence Beijing is expected to have significant sway in the region. As of now, other 15 RCEP countries decided to go ahead without India. However, doors aren’t permanently closed for India. India being a large market will always be a lucrative trade and investment destination. RCEP’s bottom lines will push India towards making its markets more competitive.