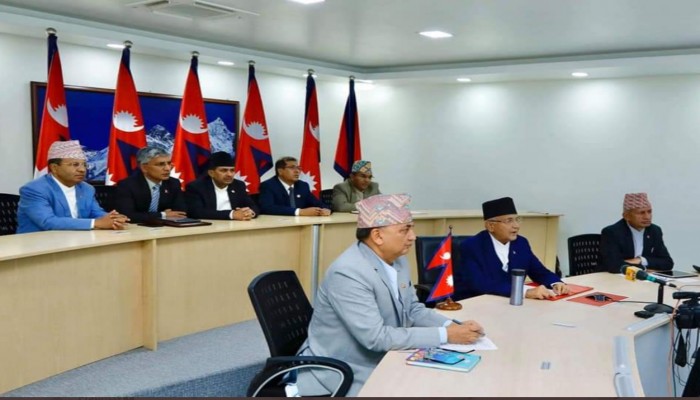 Playing straight from the typical Chinese communist party playbook, Nepal has included three Indian-controlled territories in its map. Nepal’s act of releasing a new map on Wednesday with Nepal emblem depicting Kalapani, Lipulepkh and Limipiyhura a total of 335 sq km of land, administered by the Pithoragarh district of Uttarakhand has escalated tensions between the two countries. This unilateral change in the status quo of the region is bound to take a toll on the tethering bilateral ties which have descended to a new low. Nepal’s brinkmanship which threatens to drive a wedge by irrevocably damaging the historical cultural, religious, linguistic ties might have longstanding implications besides the immediate and palpable strategic ramifications.

Within months into power, Nepal Prime Minister KP Sharma Oli created ripples for his authoritarian quirks. Having garnered majority on anti-Indian campaign rhetoric, Oli consistently bolstered ties with China. Centralising powers, he brought several agencies including the investigation agencies, social welfare council (that regulates NGOs), revenue investigation and money laundering agencies (investigating financial scandals) under his control. He eroded judicial independence, censored news agencies and selectively targeted dissenters 1. Oli’s high-handed policies drew ire of political opponents. By April, criticism over poor handling of Corona crisis, infighting between the factions headed by Oli and Prachanda became more intense. To avert the political crisis, Oli brought out two ordinances- seeking amendments to the existing Political Parties act and Constitutional Council. As per the new ordinance, a split vote can obtain 40% support from either the central committee or the Parliamentary party to split as opposed to mandatory 40% support from both Central committee and Parliamentary party 2.

Oli rushed these ordinances to split the Samajwadi Party, but instead of splitting, the party merged with Rashtriya Janata party of Nepal. Oli’s decision drew severe political criticism, protests erupted and within four days, he was forced to withdraw the Ordinances 3.  With intra-party fighting showing no signs of abatement, Chinese ambassador to Nepal, Hon Yanqi intervened. She held meetings with different leaders including the President and Prime Minister Oli. Yanqi held two meetings with Oli in a week. Around the same time, extending support to Nepal in its fight against Corona, President Xi held meeting with Nepali President Bidhya Bhandari. The Prachanda faction was in talks with Song Tao, head of International Liasion Department of the Communist Party of China to discuss the latest political developments among other things 4. China extensively engaged with Nepali political hierarchy in the intervening week of April and May.

On May 2nd, while Chinese ambassador held parleys with Nepali leaders, CGTN (Chinese Global Television Network) made an unsuccessful bid to lay claims over the Mt. Everest christening it as Mount Qomolangma, located in the China’s Tibetan Autonomous Region on twitter. Netizens trolled CGTN for its ludicrous claims, following intense backlash, the tweet was pulled down. China’s nascent bid to consolidate claims over Mt. Everest and its controversial move to mount 5G network at 8000mt to snoop over India, Bangladesh, Myanmar is clearly an attempt to infiltrate into the sub-continent.

Capitalising on the simmering anti-India sentiment, China started using Himalayan country as a pawn in its geopolitical game play. Despite China’s proclamations of non-interference in affairs of foreign countries, Beijing’s implacable role in the ouster of Zimbabwe President Robert Mugabe, in 2017 has alerted World of its backchannel dealings and political collusions. Given Nepal political dispensation’s formidable links with the Chinese Communist Party for the past decade, a similar scenario can’t be ruled out.

Post 2015 blockade, Indo-Nepalese ties have taken a massive hit. Even Prime Minister Modi’s cultural outreach failed to mollify the Nepalese. The publication of the restructured India’s political map in November, 2019 with Kalapani as a part of Indian state of Uttarakhand has triggered a new storm and opened fresh debates about its inclusion. Kalapani has been at the heart of Indo-Nepalese border dispute. While foreign secretary talks were planned to resolve the dispute in the wake of severe protests from Nepal, the issue was pushed to a backburner due to Corona pandemic.

Inauguration of 80-km road to Lipulekh pass, the trijunction of India, Nepal and Tibet on May 8th by Indian Defence Minister Rajnath Singh has resurrected the border dispute. This road will offer an alternate route to reach Manasarovar, the other being the Natha La pass in Sikkim. Having realised the need for developing extensive infrastructure leading to trijunctions along the LAC (Line of Actual Control), India expedited projects in the region. Development of Lipulekh road has been in public domain since 2008 but Nepal raised fresh objections now. Terming this as “unilateral” act, Nepal foreign ministry summoned Indian Ambassador and asked India to “refrain from carrying out any activity inside the territory of Nepal”.

Borders of India and Nepal are delineated as per the Treaty of Sugauli, 1816. Accordingly, the area west of the river Kali or the Mahakali or Sarada falls in the Indian territory while the area to the East of river belongs to Nepal. But the dispute became murkier with nations having a conflicting opinion about the origin of the river Kali. Nepal claims that river originates from a stream at Limpiyadhura, north-west of Lipulekh. Thus, all the three regions, Kalapani, Limpiyadhura and Lipulekh fall to the east of the river part of Darchula district of Nepal. While India claims that Kali originates somewhere downstream of the pass. India has the administrative and revenue records showing Kalapani as part of Pithoragarh district of Uttarakhand. Both countries have set up Boundary Technical groups which successfully resolved several areas except Kalapani and Susta. Though leaders of both sides have repeatedly pledged to demarcate the region properly but it hasn’t happened 5.

During the Indo-Sino 1962 war, India has set up a military post at Kalapani perched at an altitude of 20,000ft offering a great strategic advantage. Since then India has been operating from the region while Nepal calls it an encroachment. Matters became worse after India and China agreed to set up trading post at Lipulekh in 2016 without taking Nepal onboard. While Nepal terms Lipulekh as trijunction, after the joint statement in 2016, China never raised the issue. Pertinent to say, it believes that the region is a bilateral issue. But then at the height of the Doklam crisis, Chinese mouth piece, The Global Times threatened that India might be helpless if PLA would walk in, “through Kalapani or into Kashmir, through PoK”, both trijunctions like Doklam. Needless to say, these regions are strategically very important to India’s security 6.

Resolving the outstanding border disputes can not only enhance trust but can favourably usher the regions into a pragmatic cooperation. But Prime Minister Oli battling an intra-party infighting, picked up perfect occasion to brew a storm in the region at a time when the border skirmishes along LAC have escalated.

Through bombastic claims aimed at stirring ultra-nationalistic fervour, Oli whipped up anti-Indian sentiments creating unwarranted tensions. The tearing hurry in passing a special resolution in Parliament to reclaim three regions and cabinet decision to bring about a new map is not lost on the strategic analysts who are quick to point at similar act of the Dragon.

Defending its unabated aggressive reclamation of the South China Sea (SCS) China hinged its legal claims to the region by way of the historical nine-dash demarcation. While there is no historicity to the nine-dash line, to buttress China’s maritime treasures, the nationalist government in 1947 employed Yang Huairen, a Chinese geographer to make 11-dash line and 286 bits of rock and turf on Chinese map to demarcate Chinese waters in the SCS. Indeed, the British educated Yang painstakingly used the maps prepared by the British explorers to map the territorial features in the SCS. In 1949, Kuomintang which suffered defeat at the hands of Communist party, fled China for Taiwan.

The communist party used the map. In 1952, the map lost two dashes after Mao ceded claims of Gulf of Tonkin, to Vietnam to bring it into Communist fold. Research shows that till 2012, the phrase nine-dash line has been used only six times 7. When Philippines pulled China to ICJ for laying claims over the Scarborough Shoal, ICJ quashed China’s historic claims.

Though China has rejected the verdict, China’s shallow claims are now deemed fake and can’t stand the legal scrutiny. In the wake of inclusion of Kalapani by India, Nepal mulled the prospect of taking the issue to ICJ for settlement. The chorus for such proposal has grown louder after the release of its new map. Pertinent to say, while archives of treaties, map libraries, historical documents and articles by boundary experts would help in conflict resolution, artificial expansion of territory on a map will not be legally valid.

India peacefully resolved both maritime and land boundary disputes by exchanging conclaves peacefully. Oli’s unwarranted needling of India with inelegant references to India’s emblem “Satyameva Jayate” (truth alone triumphs) and mocking whether it is “Sinhaev Jayate” (lion prevails) and telling the lawmakers that Corona virus from India is more “lethal” than those from China or Italy8 is bound to create bad blood. As a part of bilateral cooperation 9 India sent 23 tonnes of medical supplies and Nepal has publicly expressed its gratitude.

But Oli’s brinkmanship to tide over his waning popularity, amid health emergency, at the height of escalations along the LAC hint at a plausible geopolitical collusion. Perhaps, Indian Army General MM Naravane may not be completely wrong in stating that “Nepal is protesting at behest of someone”.

Besides, Nepal’s complete silence and helplessness despite Huawei’s alleged hacking of over 200 Nepali websites and various land grab attempts including 36 hectares of land in four different districts as part of road expansion project, 6- hectares in Bhagdare river, 4- hectares in Karnali river, 6- hectares in Sanjen river, Bhurjung river and Jambukhola, 11- hectares in Sindhupal Chowk, 9 hectares in Sankhuwasabha. All these areas are now completely or merged into Tibet 10. While Nepal vociferously lashes out at India, it hardly raises a finger at China.

As a responsible regional power while is incumbent on India to constitute a mechanism to amicably resolve the dispute, Nepal must stop playing the “small country syndrome” for eternity seeking an identity at every turn of event and calling it tyranny of the weak. Nepal has been playing India against China since 1950s conveniently trivialising issues. It is time, Nepali leaders stop raking border issues with are integral for sovereignty and territorial integrity for its petty political gains.