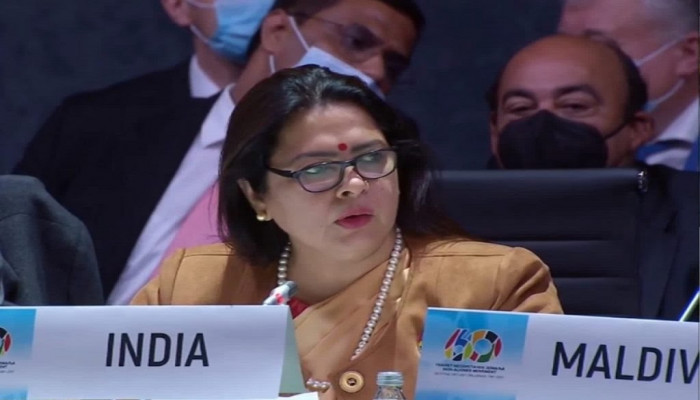 India urged the Non-Aligned Movement (NAM) to carry out an honest introspection about its functioning and influence on contemporary global issues.

In an address at a meeting in Belgrade to mark the 60th anniversary of the NAM, Minister of State for External Affairs Meenakshi Lekhi, said, “While NAM has been effective in some areas where we have spoken in one voice to defend our interests and those of developing countries; we have increasingly become ineffective in certain other areas, particularly in tackling new and emerging challenges.”

“This is primarily due to the tendencies of some NAM members to deliberately take up divisive issues, or to use NAM platform for bilateral score-settling, thereby creating division among us. Such pursuance of partisan agenda rather than working towards strengthening our collective effort has resulted in an increasing number of Members having to disassociate themselves from NAM positions”, she added

She also said that NAM members were splitting themselves into camps reflecting geo-political divides outside NAM rather than strengthening NAM itself to become an independent pillar and influential voice in international forums.

“NAM was created to pursue the collective interest of developing countries. This has been our strength, but we risk becoming irrelevant if we do not check the divisive tendencies within our movement. We also need to revisit and revitalise our methodology of discussion and decision making, following arbitrary and non-criteria based procedures will not hold us in good stead,” Lekhi added.

She also spoke about Covid-19, saying the way in which the pandemic has wreaked havoc across the globe has exposed the inadequacies of the multilateral system in effectively responding to perhaps the biggest challenge of contemporary times.

“NAM, with its diversity, shared developmental experience, and youthful and dynamic population, has the potential to take the lead and be a force for global good,” she added.

The Non-Aligned Movement (NAM) is a forum of 120 developing world states that are not formally aligned with or against any major power bloc. After the United Nations, it is the largest grouping of states worldwide.

The term 'Non-Alignment' was used for the first time in 1950 at the United Nations by India and Yugoslavia, both of which refused to align themselves with either side in the Korean War.

The Non-Aligned Movement as an organization was founded on the Brijuni islands in Yugoslavia in 1956 and was formalized by signing the Declaration of Brijuni on 19 July 1956.