N Ram and the Congress Cabal stand exposed again. Their hypocrisy over the Election Commission is shameful. 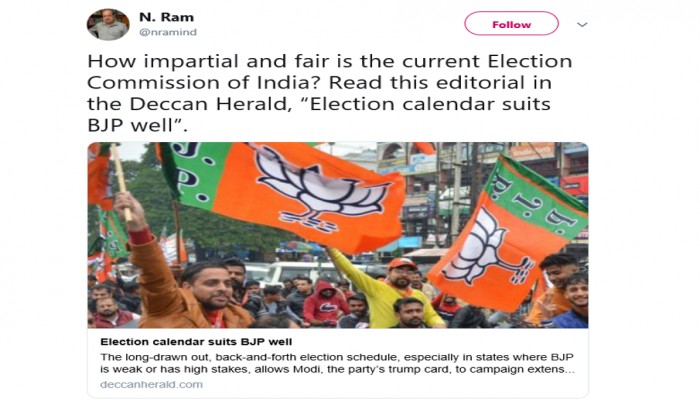 N. Ram is on a roll. He is not leaving any opportunity. He is placing every opportunity in a platter where his hypocrisy can be exposed.

On March 13th, 2019, N. Ram tweets about an editorial that came in Deccan Herald. “How impartial and fair is the current Election Commission of India? Read this editorial in the Deccan Herald, “Election calendar suits BJP well”.

My mind immediately went back to exactly ten years back. On January 31, 2009, N. Ram had an exclusive story (unlike the recent fake Rafale exclusive, this story was really an exclusive!). The then Chief Election Commissioner of India, Mr. N. Gopalaswami wrote to the then President of India, Ms. Pratibha Patil, recommending the removal of Election Commissioner, Mr. Navin Chawla!

An Election Commissioner, who is supposed to be impartial is now accused of leaking information to the Congress party?! By nonetheless the Chief Election Commissioner? What proof did the CEC submit? He submitted nearly 800 pages of documentation, listed out 12 instances in a 24 page summary and recommended the removal of Mr. Navin Chawla.

Enter N. Ram and his opinion. N. Ram was aghast and perturbed. N. Ram was angry and upset. Not because an Election Commissioner was allegedly leaking information to the Congress party. But because apparently the CEC has no power to write such a recommendation! You think I am kidding? Let’s then proceed to read the following:

“Suo moto act is constitutionally and democratically out of line, will damage institution”

N. Ram did not think that a serving election commissioner being partial to the Congress party will cause “damage” to the institution. Nah, that is not the big problem here for him! The big problem for him is that the CEC recommending the removal of EC is “constitutionally and democratically out of line” and “will damage institution”!

N. Ram was ecstatic when the then President of India, Ms. Pratibha Patil rejected the CEC’s recommendation (as if we expected something different to happen!). The Hindu’s editorial said – “The CEC’s move was wholly indefensible in terms of both its constitutional overreach and its timing.” – still continuing the same argument, that the bigger issue is not Navin Chawla’s alleged partisanship but the very nature of CEC’s recommendation!

Let’s come back to January 2019 and the article that N. Ram so graciously asked us to read. Deccan Herald’s editorial accuses the current Election Commission to be partial towards the BJP. Why? “…because the schedule of polling announced seems to be tailor-made for Prime Minister Narendra Modi to be able to criss-cross the country many times and campaign in the maximum number of constituencies possible.”

I am amazed at he magical powers of Prime Minister Modi where not only can he “criss-cross the country many times” but can even prevent the other leaders from doing so! Even if we take this argument at face value – then isn’t the election schedule a massive advantage to the SP-BSP coalition of Uttar Pradesh because their leaders only need to travel across the state and not the country? Isn’t the election schedule a massive advantage to Mamta Banerjee who has to only “criss-cross” only West Bengal over 7 phases? How is an extended schedule going to help only the Prime Minister and not any of the other campaigners?!

Or is this is the first time that the Election Commission has announced such a long drawn out schedule? No! 9-phase 37 day schedule in 2014. 5-phase 28 schedule in 2009. Or take any of the state government elections during the recent years. We have continuously seen long drawn out election schedules, especially in the last 10 years. Where were all these people when many social media folks were continuously questioning election commission on these long drawn out schedules? Why has the cabal woken up now, and is now giving flimsy reasons as to how this will benefit the BJP! Didn’t they know earlier that these long drawn out schedule are a cost to the country? The extra cautiousness of the Election Commission needs to debated for sure, but the cabal’s intention is however very clear now – they will wake up only if any potential advantage is seen for the PM. To top it all, we are also told that “…those who find politics behind this cannot be faulted”.

No wonder N. Ram recommended this editorial – because no one can question what’s written!  Don’t you find it amazing that he wasn’t concerned when an Election Commissioner was accused of helping the Congress party, but it very concerned that the schedule of the election is such that the Prime Minister can travel to more places to campaign? Like I said at the beginning, N. Ram is on a roll!