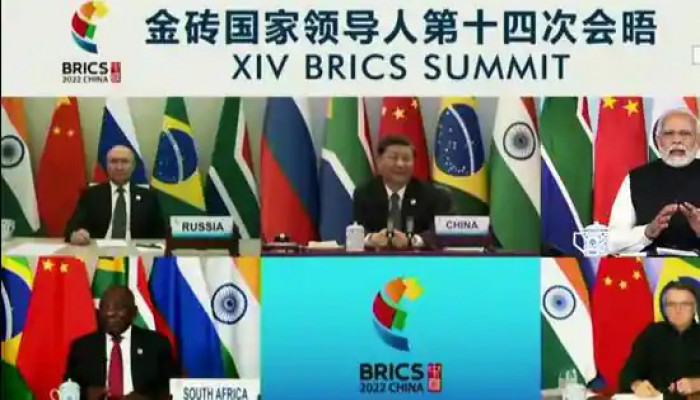 Prime Minister Narendra Modi on Thursday addressed the 14th BRICS Summit through video link and said the grouping can make a useful contribution to the global economy’s post Covid recovery.

The Prime Minister said this in his opening remarks at the virtual BRICS annual summit in presence of Chinese President Xi Jinping, Russian President Vladimir Putin and top leaders of Brazil and South Africa. The summit is being hosted by China as the Chair for this year.

"Our mutual cooperation can make a useful contribution to the global post-Covid recovery," Modi said.

Modi said the citizens of the BRICS nations have derived benefits from the mutual cooperation that the member countries have had.

Modi expressed happiness and satisfaction over the fact that the membership of BRICS' New Development Bank has increased.

Further, Modi said he was confident that the BRCIS leaders’ deliberations today “will produce suggestions to further strengthen our ties”.

On Wednesday, PM Modi addressed the BRICS Business Forum and stated that the country's digital economy and the infrastructure sector have a total potential of USD 2.5 trillion. The PM underlined that the digital transformation which India is witnessing has never before been seen anywhere in the world.

“There are more than 100 unicorns in over 70,000 start-ups in India, and their number continues to grow. There are investment opportunities of USD 1.5 trillion under our National Infrastructure Pipeline. The value of the Indian digital economy will reach USD 1 trillion by 2025.

“Transformative changes are taking place in every sector in the emerging New India,” said PM Modi.