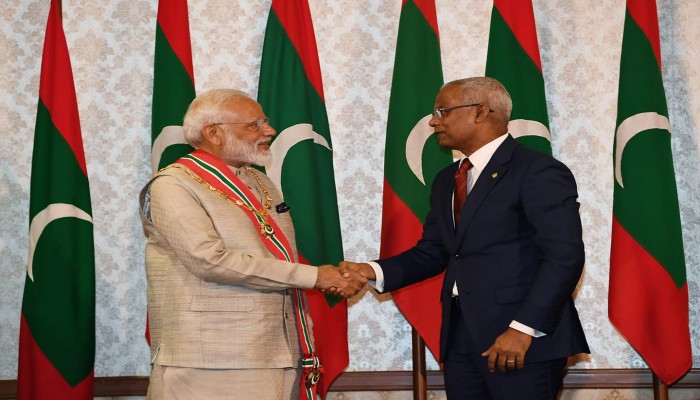 For long, conjured up with the totemic precincts of South Asia, Indian strategic pursuits remained boxed in the framework of SAARC (South Asian Association for Regional Cooperation). Surpassing the barricades of prefixed boundaries, Modi made a dynamic move of inviting BIMSTEC (Bay of Bengal Initiative for Multi Sectoral Technical and Economic Cooperation) leaders for his swearing-in ceremony signalling India’s east ward orientation. Complementing his pragmatic diplomatic outreach, reinforcing the inclusivity of “Neighbourhood First Policy”, Prime Minister Modi, the leader of the largest democratic republic began his second innings with a maiden bilateral visit to Maldives, the tiny Muslim nation.

During his first term, Modi reshaped India’s ties with immediate neighbours with numerous bilateral visits, generous credit lines and invoking traditional links. But India’s ties took a hit under Maldivian President Yameen whose overturned India First Policy of Male and made overt overtures to China. Indo-Maldivian ties nosedived under an authoritarian Yameen who imposed emergency, denied visas to Indian personnel stationed in Maldives and returned reconnaissance choppers gifted by India. India resisted use of force, took diplomatic recourse and ensured conduct of free and fair elections. Surprise victory of President Mohammed Solih supported by Maldivian Democratic Party (MDP) put the archipelago back on to the path of democracy. Reiterating India’s support to people’s verdict, Prime Minister Modi the lone South Asian leader to be invited for the oath taking ceremony graced the occasion. Asserting India’s support to the Indian Ocean Archipelago, Modi resurrected India’s ties with its western maritime neighbour.

Modi’s first bilateral visit not only reaffirmed geostrategic importance of neighbourhood first policy but envisaged to give a massive fillip to the SAGAR doctrine. On his visit to Seychelles, Mauritius and Sri Lanka in 2015, Modi pronounced Indian Ocean Strategy, SAGAR (Security and Growth for All in the Region) underscoring the importance of securing the maritime domains and developing blue economy to transform economies of Indian Ocean Islands. The doctrine attempts to address the issues of sustainable development and challenges faced by Small Island Nations grappling with climate change. Maldives which abuts the major shipping routes of the Indian Ocean and just 750 nautical miles away from Indian peninsula is strategically important for security and stability of the Indian Ocean Region.

Modi’s first visit to the Archipelago after returning to power attests India’s commitment in furthering democracy and symbolised return of peace, law and order to the islands which reeled under emergency imposed by an authoritarian regime. Espousing the two-pronged strategy of reinvigorating and strengthening ties and to address special needs and concerns of small islands Modi travelled to Male on June 8th. Modi was received by the foreign minister Abdulla Shahid received ceremonial reception. Invited to address the session of the newly constituted Majilis (Parliament of Maldives), Modi paid glowing tributes to the indomitable courage and will of the people who overwhelmingly chose democracy. Speaking from the pedestal of Power at Maldives Republic, Modi put forth his vision for the region, the challenges faced and offered unstinted cooperation towards its development. He asserted that mantra of “Sab ka saath sab ka vikas and sab ka vishwas” (together with all, for the development of all and with the trust of all) is not only for India but is guiding principle of his foreign policy. He called the centuries old trade, cultural and ethnic ties between both countries and listed some words which have same meaning in both Hindi and Divehi language. Driving home the importance of fostering the cultural links between both the countries, Modi agreed to start ferry service between Kochi and Male to strengthen people to people connect.

Pledging mutual cooperation, amidst the growing geopolitical uncertainties, realignments and shifting axis of power, Modi recounted three major challenges of the region-terrorism, climate change and need for rule-based order in the Indo-Pacific. The Indian sub-continent and more specifically, Maldives is beset by rampant indoctrination and radicalisation. On per capita basis, Maldives is the only non-Arab country with highest number of foreign fighters in ISIS. Radicalisation received a huge fillip under Yameen’s regime who trampled the syncretic attributes of the archipelago. State sponsor terrorism similar to climate change has emerged as major challenge in the contemporary times. Modi sought cooperation of international community to convening global summits to address the same. He condemned the penchant of countries that justify this barbarism under the illogical distinction of “good and bad terrorists”.

Speaking about the adverse effects of adverse climate change leading to melting of ice caps, concomitant rise in sea-water levels and threat of inundation faced by small island nations, Modi reflected on India’s climate change initiative International Solar Alliance (ISA) a joint initiative of India and France. He congratulated Maldives for ratifying ISA and highlighted potential use of renewable energy sources in mitigating climate changes. With centres of power shifting from the West to the East, the construct of Indo-Pacific is finding greater relevance. Though there still remains some confusion about the demarcation of Indo-Pacific region home to 50% of World’s population, New Delhi’s definition stretches from Gulf of Aden to Malacca Straits. Severe contestations, unresolved maritime and territorial disputes turned Indo-Pacific, a hotbed for rivalries. To ensure stability in this region, nations must subscribe to rules-based order. Increasingly, small island nations are insisting on their “Indian Ocean identity”. By acknowledging the strategic importance of Maldives which is conscious of its maritime salience, Modi has enhanced political leverage of India. By invoking India’s policy of “Vasudaivakutumbakam” Modi vouched to support Maldives for the greater prosperity and common good of the region. These traditional underpinning go a long way in earning trust of the neighbours. Taking an indirect at China, Modi assured that India’s developmental partnerships would empower people, enhance progress, reduce dependence and not weaken them.

India offered to construct an international cricket stadium and provide world class training facilities. Maldives in return allotted land for the new Chancery Building at Hulhumale. As a token of appreciation of Modi’s stellar efforts in revamping Indo-Maldivian ties and India’s magnanimous financial assistance, Maldivian government has conferred the highest civilian award, the Order of the Distinguished Rule of Izzudeen. This honour is an indirect recognition of “patient diplomacy” adopted by India which resisted the temptation to intervene militarily despite President Yameen’s repeated provocations. Restoration of democracy has opened up a fresh chapter in Maldivian politics. India’s resolve to help Maldives to address its developmental challenges and priorities has turned the tide in favour of New Delhi. At a time, when analysts have announced that India has lost its neighbourhood to China through persistent and concerted efforts, India is slowly winning them back. Effusive warmth, new faith and Maldivian desire to “rekindle old friendships while fostering new ones” marks a new high in Indo-Maldivian ties.