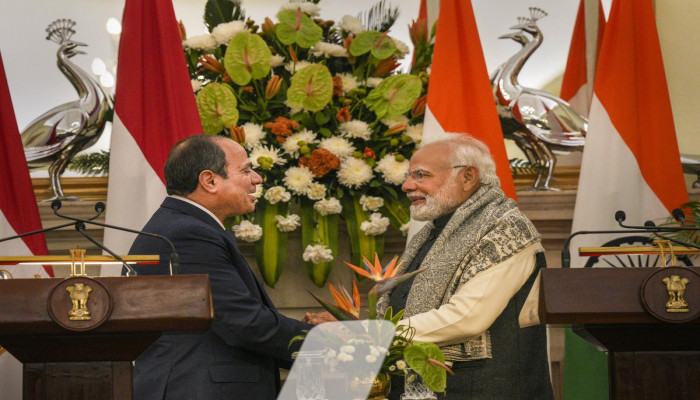 Prime Minister Narendra Modi on Wednesday announced that India has decided to elevate bilateral relations with Egypt to a strategic partnership. "We've decided that under India-Egypt Strategic Partnership we will develop a long-term framework for greater cooperation in the fields of politics, security, economics and science," PM Modi said at a joint press conference after holding wide-ranging talks with visiting Egyptian President Abdel Fattah El-Sisi.

India and Egypt also today exchanged MoUs in the fields of cyber security, culture, information technology, youth matters and broadcasting. PM Modi and President Sisi also witnessed the release exchange of commemorative postage stamps to mark the milestone of 75 years of the establishment of diplomatic ties between India and Egypt.

El-Sisi who arrived in Delhi on Tuesday on a three-day visit, is the chief guest for the 2023 Republic Day Parade.

Addressing the joint press meeting at Hyderabad House, PM Modi said, "We have also decided in today's meeting to further strengthen cooperation between our defence industries, and to increase the exchange of counter-terrorism information and intelligence."

He said that India and Egypt will take strong action to control cross-border terrorism.

"India and Egypt are concerned about terrorism. Both countries agree that strong actions must be taken to control cross-border terrorism. During the Covid outbreak, we worked together to meet the requirements of both countries," PM Modi said.

"We'll also cooperate on misuse of cyberspace that helps in spreading extremism and radicalisation. We also held discussions on the supply chain that was disrupted due to COVID and Ukraine crisis," PM Modi said.

"I am happy that the Egyptian military contingent will also be participating in the parade," he said. "India and Egypt are two of the oldest civilisations. There is a history of trade relations between our two countries. In the last few years, our bilateral ties have deepened. This year Egypt has been invited as a special guest at the upcoming G20 meeting," the prime minister said.

Meanwhile, the Egyptian President has invited Prime Minister Modi to Cairo to take the ties between the two countries forward.

"I met PM Modi in 2015 in New York and I had full confidence in him. I knew he will take his nation forward. I have invited Prime Minister Modi to Cairo, Egypt to take our relationship forward," the Egyptian President said in the joint press conference today.

Earlier in the day, the Egyptian President was accorded a Guard of Honour at the Rashtrapati Bhavan where he was welcomed by President Murmu and Prime Minister Modi. "I expect through this visit that we take our bilateral level to a whole new horizon, where we can reach the relationship and partnership between the two countries at all levels. I look with great esteem to the sustainable development experience of India," he said.