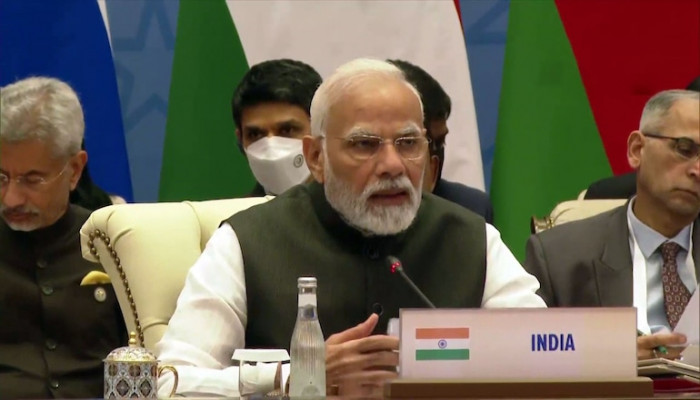 To prevent the Sino-Russo axis from becoming a fool-proof alliance and to manage ties with China from the inside rather than outside, India is actively engaged with SCO

Despite the global power play and the insidious Sino-Pak nexus always at work, there is a deep appreciation of what India brings to the table especially- values, ethos, leadership and economic advantages

As always, the prelude to the SCO meeting is dominated by popular debate about the relevance of SCO for India. Founded by Russia and China, labeled as an anti-Western front and coalition of authoritarian regimes, a section of strategic analysts rued India’s association with the SCO. Shrinking Moscow’s economic and political heft, the ascendancy of China, the deepening China-Pakistan nexus and Beijing’s plans of turning it into a China club have further sharpened this debate. India’s growing proximity to the West has further made this an oddity.

At a time when the world is grappling to recover from the Covid onslaught, the ongoing Russo-Ukrainian military confrontation has further derailed the path of recovery intensifying food and fuel security challenges. Against these widespread disappointments, India’s need-based intervention during the Covid gave it ample room for setting its economy right. Russia’s economy is reeling under the burden of wasted war and China’s zero covid policy has hemorrhaged its economy and frequent supply chain disruptions are forcing investors to exit. India’s resilient economy and independent foreign policy are now looked upon by the world.

Countries in the extended neighbourhood especially the Central Asian Republics (CARs) burdened by Chinese debts and domestic backlash against China are seeking to break free from the stranglehold of Russia and China and are placing bets on India. India’s resistance to Chinese aggression has further positioned India as a responsible power and bulwark of sorts against The Dragon.

As suggested by Harsh Pant, “India must make the most of its geopolitical sweet spot”, New Delhi is leaving no stone unturned to seize its right place across different multilateral platforms to advance its growth story1. To prevent the Sino-Russo axis from becoming a fool-proof alliance and to manage ties with China from the inside rather than outside, India is actively engaged with SCO.

During his 24-hour-long engagement at SCO, PM Modi, refusing to be ensnared by China’s popular gambit, avoided any kind of brush with President Xi and even skipped the informal SCO heads of state dinner. Days before the SCO, China dangled carrots of minor disengagement at the PP15 anticipating India’s request for a dialogue with their leader at SCO. With Beijing firmly rejecting de-escalation at a major face-off in Depsang plains, Modi royally ignored China’s frivolous tactics and refused to play into Chinese hands. Similarly, Modi snubbed Pakistan for its blatant duplicity of continued cross-border provocation despite a ceasefire agreement. But held meetings with Russian President Vladimir Putin, Uzbekistan President Shevkat Mirziyoyev, Iranian President Ebrahim Raisi and Turkish President Erdogan.

Underscoring the centrality of Central Asian countries for SCO, Modi touched upon priority areas of bilateral cooperation, trade, economic cooperation and connectivity including the considered use of Chabahar Port and INSTC to unlock trade potential with the host Uzbekistan. This meeting is in a continuum of the first India-Central Asia summit in January, where both sides set a roadmap for connectivity2.

But Modi’s opening remarks of “Today’s era is not of war..” 3 with Putin grabbed all the attention. Mischievously interpreted as a rebuke by Western analysts, Putin immediately acknowledged that he was aware of India’s position of diplomacy and dialogue and proposed visa-free tourist travel.

One of the main objectives of the establishment of SCO was to maintain stability and security of the vast Eurasian region and counteract the emerging challenges, promote trade and cultural and humanitarian cooperation. Among the core visions of SCO is to fight the three evils- extremism, terrorism, and separatism. But over a period of time, in line with China’s economic trajectory and BRI launch, the SCO shifted its attention to enhancing economic cooperation and promoting trade through improved connectivity.

The predecessor of SCO, “Shanghai Five” comprising China, Russia, Kazakhstan, Tajikistan and Kyrgyzstan was formed in 1996 to deepen military trust along the border region. With the joining of Uzbekistan, this turned into SCO, (Shanghai Organisation Cooperation), a multilateral organisation in 2001. China and Russia vied to exercise their control as the organisation sought to expand, Russia backed Indian membership, while Beijing brought Pakistan into the group. Consequently, both New Delhi and Islamabad were granted observer status in 2005 and in 2017 and both of them became full-fledged members of SCO.

Covering a geographical expanse of 60% of Eurasia, representing 40 % of the world population and 30% of global GDP, SCO is the largest regional organization. In a massive boost to the expansion drive of SCO, Iran is going to be inducted as the ninth member officially in 2023. Full-fledged membership for Belarus and Mongolia is under process. SCO has now officially granted dialogue partner status to eight countries- Bahrain, UAE, Kuwait, Myanmar, Nepal, the Maldives, Saudi Arabia, and Egypt. With an appetite for expansion, the SCO has spread to South Asia and is set to encompass the West Asian region under its ambit promoting multipolarity.

While the reputation of the SCO Member States is subject to varied interpretations, in terms of economic and nuclear heft, this is one of the most influential groupings comprising four nuclear powers. But the presence of India in SCO has lent the group some credibility and transparency, whose principles align with India’s commitment to multipolarity. Through its multitudinous partnerships with countries belonging to varied blocs, India is now effectively serving as a bridge between various power centres.

Coinciding the SCO meeting, there was a spurt in border clashes between Tajikistan and Kyrgyzstan, and a major escalation between Armenia and Azerbaijan has underlined the tenuous peace and stability in the region. Armenia didn’t attend SCO due to a military confrontation with Azerbaijan. Representatives of the Tajik and Kyrgyzstan exchanged demarches over border clashes along the sidelines of the meeting. Tasked with maintaining Eurasian stability, SCO’s spirit has been put to a major test now. Putin has appealed for peace and pitched in to mediate the Armenia-Azerbaijan conflict.

In the light of the Ukraine Crisis, SCO Member States reiterated their “commitment to a representative, just, democratic multipolar world order based on universally recognised principles of international law, multilateralism, equal, common, indivisible, comprehensive and sustainable security, multicultural and civilisational diversity, mutual benefit and equal cooperation with a central coordinating role for the UN”4.

Unlike the Western countries, the SCO countries effectively lack a common binding factor. To make for the lack of a pronounced congruence, the declaration effectively highlighted the concerns of most of the member countries. Unanimous exhortation of - “unilateral application of economic sanctions other than by the UNSC is inconsistent with the principles of international law and adversely affects third countries and international economic relations” reflect the same. Reiteration of, “the inadmissibility of interference in the internal affairs of States under the pretext of countering terrorism and extremism, as well as the inadmissibility of the use of terrorist, extremist and radical groups for selfish ends”, underscored Pakistan’s policy towards Afghanistan.

Unequivocally condemning, terrorism, countries called for a speedy settlement of the Afghanistan situation and the establishment of an inclusive government for strengthening the security and stability of the region. Uncertainty in Afghanistan has dire consequences for the region and India as well. With regional security an integral aspect of its existence, SCO is the most effective forum to address the Afghanistan issue.

The Samarkand Declaration called for an outer space free of weapons, enforcement of nuclear disarmament, no global stockpiling of missiles and strict adherence to biological and chemical weapons treaty.

Evolving as a major group, SCO is now slowly building alternate organizations and mechanisms which include the SCO Economic Forum and SCO Economic Think Tanks, SCO Member States Techno Parks Pool, SCO Business Council, SCO Interbank Association, SCO Development Bank and the SCO Development Fund. In the process, SCO has adopted a roadmap for increasing the share of National Currencies in Mutual Settlements and called for its expansion as well.

Member States have resolved to cooperate in counter-terrorism, digital economy and digital technologies, international information security, energy cooperation, telemedicine, international road and rail administration, disaster management assistance, tracking down illicit drug trafficking, environment protection and sports. SCO has also charted out a roadmap for cooperation to control preventive and infectious diseases and epidemic threats and climate change. In all, 28 intergovernmental agreements were approved including those on plant quarantine, tourism and industrial cooperation5.

At SCO, PM Modi underscored the need for developing reliable, resilient and diversified supply chains for the region, the need for better connectivity, and the importance of giving each other “full right to transit”. Denying transit access, Pakistan has blocked India’s connectivity to Afghanistan and Central Asia. He offered to share India’s experience of using technology for ‘people-centric development’ by establishing a Special Working Group on Start-ups and Innovation and a Special Working Group on Traditional Medicine with India as permanent chair6.

To address the challenging food security situation, Modi recommended the cultivation and consumption of Millets and proposed to conduct Millet Food Festival in the wake of the UN declaring 2023 as the ‘International Year of Millets’.

As the chair of the SCO Council of Heads of government in 2020, India organised the first ever digital Buddhist shared heritage exhibition, SCO Young Scientists Conclave, SCO Startups Forum, SCO MSME Forum, and translation of 10 books of regional literature into official languages of SCO- Chinese and Russian. India assumed the chairmanship of the Council of Regional Anti-terrorist Structure (SCO-RATS) in 2021.

With India set to assume the SCO chair for the year 2023, the task for New Delhi is cut out. Varanasi is nominated as the first ever SCO Tourism and cultural capital as per regulation adopted at the Dushanbe SCO Summit 2021 to promote tourism, cultural and humanitarian exchanges between India and SCO members. It underlines India’s ancient civilisational links with member states of SCO, especially CARs7.

Despite the global power play and the insidious Sino-Pak nexus always at work, there is a deep appreciation of what India brings to the table especially- values, ethos, leadership and economic advantages. Shedding the ideational trappings, India is leaping forward to forge new partnerships with various countries to emerge as a power of global relevance. India aspires to turn SCO into another stepping stone for its potential rise.