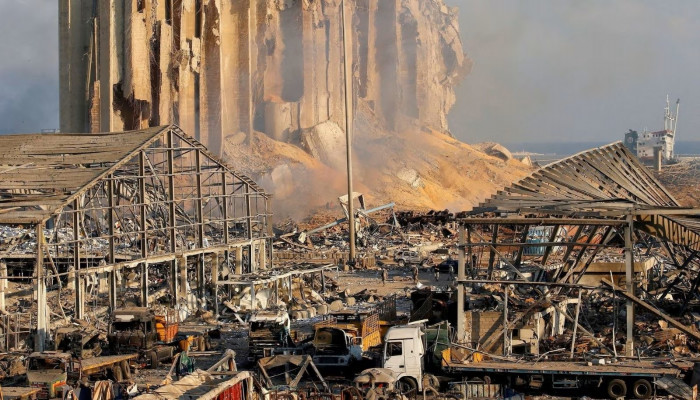 Lebanon’s campaigning judge Tarek Bitar, who is investigating the deadly 2020 Beirut port blast, charged the prosecutor general and seven others with probable intent to murder and other crimes, a judicial official said Tuesday.

The prosecution service, however, quickly pushed back, rejecting the resumption of the probe that led to the indictments of its most senior figure, Ghassan Oueidat, and the others, also accused of arson and sabotage. One of history’s biggest non-nuclear explosions destroyed most of Beirut port and surrounding areas on August 4, 2020, killing more than 215 people and injuring over 6,500.

Authorities said the mega-explosion was caused by a fire in a portside warehouse where a vast stockpile of the industrial chemical ammonium nitrate had been haphazardly stored for years. Relatives of the dead have been holding monthly vigils, seeking justice and accountability over the disaster which they blame on the crisis-torn country’s entrenched ruling class which is widely deemed inept and corrupt.

A US State Department spokesperson said in a tweet Tuesday that “we support and urge Lebanese authorities to complete a swift and transparent investigation into the horrific explosion at the Port of Beirut". Bitar’s probe has met with strong opposition from government figures and the powerful Shiite Muslim Hezbollah movement, which has accused him of political bias.

The judge was forced to suspend his probe for more than a year after a barrage of lawsuits, mainly from politicians he had summoned on charges of negligence. “Port investigation: Tarek Bitar has gone mad," ran the headline of the pro-Hezbollah daily Al-Akhbar, which also accused him of acting “on the basis of American orders and with European judicial support".

Bitar last week met with two French magistrates, who came to Beirut as part of the country’s own investigation into the explosion that killed and injured French nationals. Bitar had decided Monday, to widespread surprise, to resume his probe into the disaster, despite the strong political pressure against him.

According to the judicial official, who spoke to AFP on condition of anonymity, Oueidat had in 2019 overseen a security services investigation into cracks in the warehouse where the ammonium nitrate was stored. Lebanese state institutions have been reluctant to cooperate with the probe, which began the same month as the explosion.

In February 2021, Bitar’s predecessor as the lead judge was removed from the case after he had charged several high-level politicians. The interior ministry has also failed to execute arrest warrants issued by Bitar, further undermining his quest for accountability.

Iran-backed Hezbollah and its ally Amal called for demonstrations to demand his dismissal in October 2021, when a gun battle broke out at a Beirut rally and seven people were killed.