Leaving behind the historical baggage, India and Sri Lanka begin a new chapter 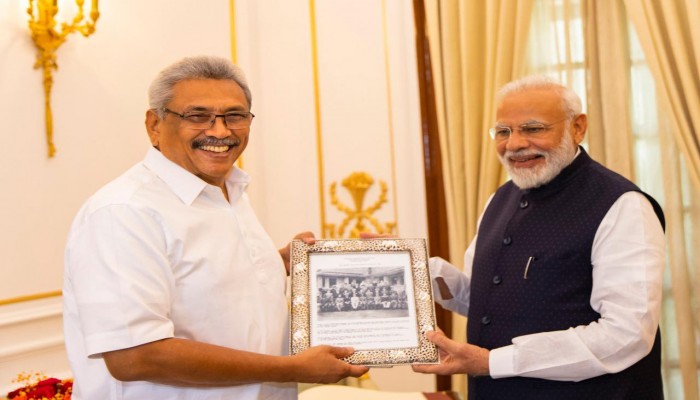 Barely ten after days after Gotabaya Rajapaksa took over as the seventh executive president of Sri Lanka, he made India his port of call. Prime Minister Narendra Modi was among the first leaders to congratulate Gotabaya on his victory. In his first telephonic conversation, he spoke about working together for “peace, prosperity and security of the region” and extended an invitation to visit India. Losing no time, Modi soon dispatched External Affairs Minister, Jaishankar Subramanian well versed with Indo-Sri Lanka relations to prepare ground for Gotabaya’s visit to India. This meeting turned out to be Gotabaya’s first official meeting as a President. India’s proactive approach and alacrity underscores the importance of strong Indo-Sri Lankan bilateral ties for peace and security of the Indian Ocean Region (IOR).

Days ahead of Gotabaya’s three-day visit to India, Indian High Commissioner to Sri Lanka Taranjit Singh signalled India’s interest to make a fresh beginning. In line with India’s intentions to deepen ties with Sri Lanka, after the ceremonial Red-carpet welcome at the Rashtrapati Bhavan, Gotabaya said, “My expectations are very high and I want to, during my tenure as the President, bring relationship between India and Sri Lanka to a high level. We of course have a longstanding friendship, historically, culturally and politically. At the same time, we need to work together for the benefit of India and the people of Sri Lanka on security as well as economic development”. Gotabaya’s optimistic remarks has in one fell swoop demolished the cynicism of naysayers who keep harping about the India’s disastrous accord with Sri Lanka. His pragmatism demonstrated an inclination to offload the baggage of the past and embark on a journey of stable and reliable friendship.

The Indo-Sri Lanka accord has irrevocably damaged bilateral ties. Beijing capitalised on the rifts in the Indo-Sri Lankan relations and smartly pushed itself into Indian neighbourhood. China’s seeping penetration posed fresh challenges to India and forcing New Delhi to reconnect with the region. Unveiling the Neighbourhood first policy, Modi endeavoured to revamp India’s ties. Scripting a fresh beginning to Indo-Sri Lankan relations, Modi visited the island nation in 2015 becoming the first Indian Prime Minister to visit Sri Lanka in 28 years. Aside bolstering assistance towards the rehabilitation of the war ravaged Tamilians and inking infrastructure development projects, as token of tangible expression of friendship and support, India launched “Suva Seriya”, a prehospital care ambulance service initially for the Western and Southern provinces in August 2016. By August 2018, India expanded it to seven more provinces. Invoking cultural ties, Modi attended the Vesak Day Celebrations in 2017. Expressing solidarity to the country ripped by the serial blasts, Modi travelled to Colombo in June days after he took charge as Prime Minister for a second time.

Indo-Sri Lankan ties which took a toll under the decade long Rajapaksa regime from 2005 to 2015 showed signs of revival under leadership of Sirisena. But infighting, inept governance, political squabbling and glaring administrative lapses in national security ensured their defeat and Rajapaksas’ romped home victory in the 2019 Presidential elections. It was largely believed that with a China-leaning left regime in power in Nepal a pro-China Rajapaksa’s’ return in Sri Lanka is India’s worst nightmare. Aside their overt Chinese leanings, Rajapaksas having outmanoeuvred the hedging game are known for their authoritarianism. India which has kept its ears close to the ground, in the past two-years built bridges of friendship with Rajapaksas and Buddhists, the main constituents of the Sinhala wave. Cognisant of imminent collapse of the Sirisena regime under the burden of its own political inconsistencies, Modi had an informal meeting with Mahinda Rajapaksa in June.

Known to be a polarising figure, Gotabaya’s fraught nature of electoral victory singularly powered by an overwhelming Sinhala majority confirms the same. Besides the vital challenges of reviving dwindling Sri Lankan economy and national security, largely denounced by minorities, Gotabaya also faces the tough task of earning the trust of Tamil minorities. India being the second largest economy in the continent with a proven counter terrorism potential and key stake holder in rehabilitation of Sri Lankan Tamils is his best bet.

Unlike the previous Indian leaderships, Modi seems to have earned the trust of neighbours. On the eve of Gotabaya’s visit to India Sri Lankan newspaper Daily mirror editorial wrote- “Prime Minister Modi is a man of conviction and courage. He has the backing of his people. He does what he believes is best for India, whether or not the World understands or appreciates. He wouldn’t hesitate to advocate such thinking for his friends in his neighbourhood”. Beyond mere lip service, Sri Lankan strongly believes that Modi can deliver. This kind of pragmatism is not lost on Gotabaya who is a strong and decisive leader. The one hour long one-on-one discussion between the leaders, on the issues of national security and economic development attests the resolve of both leaders to build a strong relationship.

Separated by a distance of 12 nautical miles, geographically India is Sri Lanka’s closest and the only neighbour. Succinctly highlighting the significance of Indo-Sri Lankan ties, in the press meet after the bilateral dialogue, Modi said- “A stable, secure and prosperous Sri Lanka is not in India’s interest but also in the interest of entire IOR”. He stated that Sri Lanka is vital part of India’s Neighbourhood first policy and SAGAR (Security and Growth for All in the Region) doctrine. Owing to its strategic geographical location, Sri Lanka will have an impact on the emerging contours of Indo-Pacific as well.

Prioritising relationship with Sri Lanka, Modi signalled that both countries must be aware of the sensibilities and securities of each other countries. Building upon the foundational frame work of the historical ethnic, cultural, religious, linguistic and civilizational linkages and keen on strengthening multi-faceted relationship and cooperation, India announced financial assistance to Sri Lanka. This includes a $400 million Line of Credit (LOC) towards infrastructure development, expediting the use of $100 million LOC for solar projects and a special $50 million LOC to combat terrorism. Clearly, India’s support in terms of finances aren’t close to Chinese investments, but India’s generous offer of assistance in intelligence sharing and crucial cooperation in tackling the Islamic terrorism which is finding its roots in the island nation is highly significant.

Sri Lanka which has cultivated an extensive intelligence network has been instrumental in crushing the LTTE and ending the 26-year old civil war. But radical Islamic terror is a different ball game and India’s support and assistance will help in extricating the fledging terror networks in the island. Indeed, the counter terror cooperation besides unearthing terror launch pads in the island can effectively safeguard India against Islamic terror attacks emanating from Sri Lanka.

In this context, it must be appreciated that while Sino-Sri Lankan ties rest on the pivot of economic assistance, Indo-Sri Lankan ties are more intricate and multi-dimensional. Rajapaksas who are known for their nationalistic approach understand the need for strong and stable relations with India.

Even now Tamil leaders accuse central leadership for failing in their responsibilities towards Sri Lankan Tamils. Highlighting India’s concerns towards them, Modi raked up the issue of implementation of the 13th amendment, which seeks establishment of provincial council system and devolution of power to nine provinces with Gotabaya. During the press meet, Modi announced construction of 46,000 houses with Indian assistance for the internally displaced people in the Northern and Eastern provinces and ensured early completion of 14,000 houses for Indian-origin Tamils in Sri Lanka. Another issue that plagues Indo-Sri Lankan ties has been of exploitative fishing of Indian fishermen in Sri Lankan waters. Leaders have reportedly discussed this issue in the bilateral talks and Gotabaya has pledged to release Indian boats and fisherman in Sri Lankan custody.

While analysts wish to address India’s proactive approach in engaging with Sri Lanka through the prism of China, there are many aspects to Indo-Sri Lankan besides the security aspects. Sri Lanka’s defence acquisitions and close ties with Pakistan also raises India’s hackles. In is election agenda, Gotabaya advocated a neutral foreign policy. Mindful of India’s redlines Gotabaya affirmed, “Sri Lanka will not be party to any activity that could be a security concern to India” at the Presidential Banquet. Elaborating Sri Lankan foreign policy, in his interview to Hindustan Times, he reiterated, “We genuinely want to strengthen our relationship. I have always said that we don’t want to do anything which will jeopardise the security of India or act against the concerns of India in any way”.

Sri Lanka with external debt of 66% to its GDP has currently the lowest growth rate of 2.3% in South Asia baring Pakistan. Besides the Chinese loans, indiscriminate corporate borrowing from external agencies backed by government guarantees in previous regime have intensified island’s financial woes. Curbs on lending and financial assistance from IMF and other European agencies owing to blatant human rights violations aggravated economic crisis. To overcome, this mounting debt burden, previous regime signed 99-year lease of Hambantota port with China to defray the $1.1 billion loan. But this hasn’t offered any reprieve. On the contrary, financial crisis exacerbated as tourism sector suffered a slump post Easter attacks.

To avoid massive macroeconomic instability, Gotabaya is inviting investments from India, Japan, Australia, Singapore and the US. Referring to the Hambantota lease as a threat to national security, Gotabaya announced that his government is working towards renegotiating the deal. Though strategists are ruling out any reworking on transaction of a sovereign agreement, Rajapaksas having woken up by the fallouts of the BRI have made it a campaign promise. While this doesn’t necessary mean that China will stop making forays into the island. But this opens up door for India to step in and offer assistance in reconstruction of Sri Lankan economy. To this end, India should reconsider reviewing the trade agreement and reduce the trade levies and increase mutual interdependence. A tangible economic cooperation and a balanced bilateral trade can go a long way in enhancing trust and deepening ties.

Through candid discussions Modi and Gotabaya have explored immense opportunities for fostering cooperation. Straddling along the commercial shipping lanes and strategically in the Indian Ocean, Sri Lanka is pivotal for India’s security and the island nation must be sensitive to New Delhi’s concerns.