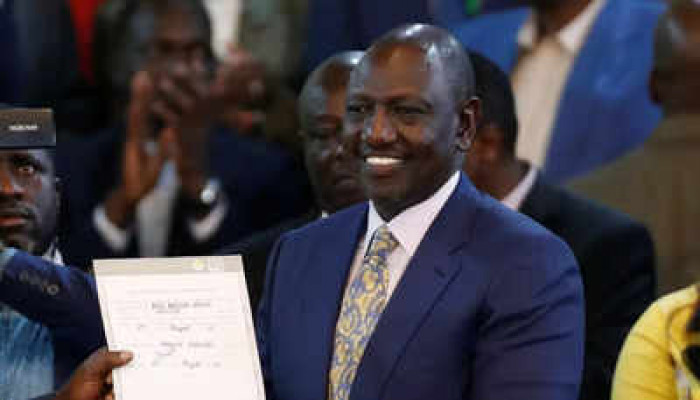 He narrowly beat his rival, Raila Odinga, taking 50.49 per cent of the vote.

“Thank you, Kenya, for the biggest honour of my life. I am ready to serve you,” Ruto tweeted. “I will work for all Kenyans. We will go out of our way to deliver on our pledges. We will serve all equally. This will be your government; the government of the people of Kenya,” he said in another tweet.

Ruto, who spoke soon after receiving a certificate to confirm his victory pledged to extend a hand of friendship to political rivals, unite the country and advance shared growth and prosperity.

“The people of Kenya have assigned us a responsibility to execute and I promise to run a transparent, open and democratic government that serves everyone fairly,” said 55-year-old Ruto.

The announcement was delayed amid scuffles and allegations of vote-rigging by Odinga’s campaign. Four of the seven members of the electoral commission were absent at the announcement, news agency ANI reported.

“We cannot take ownership of the result that is going to be announced because of the opaque nature of this last phase of the general election,” said Juliana Cherera, the IEBC vice-chairperson.

The sudden split in the commission came minutes after Odinga’s chief agent said they could not verify the results and made allegations of “electoral offences” without giving details or evidence.

Odinga didn’t come to the venue for the declaration.