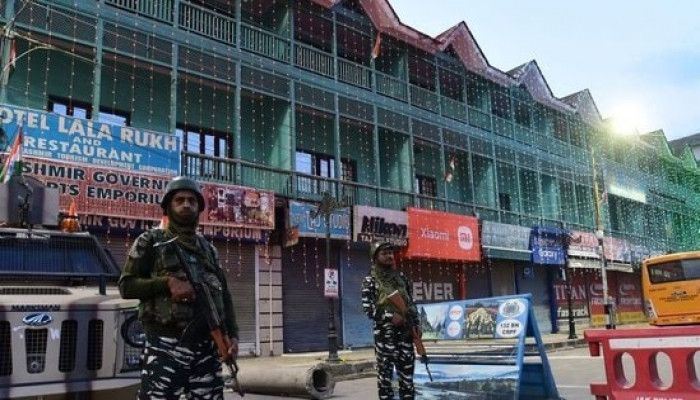 A Kashmiri Pandit died and his brother was injured after they were shot by terrorists in Shopian district of Jammu and Kashmir on Tuesday, police said.

A police official identified the deceased as Sunil Kumar and the injured as Pintu Kumar.

"Terrorists fired upon civilians in an apple orchard in Chotipora area of Shopian. One person died and one injured. Both belong to the minority community. The injured person has been shifted to hospital. Area was cordoned off. Further details shall follow," a police spokesperson said.

Terrorists have stepped up attacks in the Kashmir valley over the past week. A policeman was killed in Nowhatta on Sunday and a migrant labourer in Bandipora last week.

Meanwhile, Jammu and Kashmir Lt Governor Manoj Sinha has condemned the killing. In a tweet, the L-G said the terrorists responsible for the act won't be spared.

"Pained beyond words on the despicable terror attack on civilians in Shopian. My thoughts are with the family of Sunil Kumar. Praying for speedy recovery of injured. The attack deserves strongest condemnation from everyone. Terrorists responsible for barbaric act will not be spared," the office of the L-G J&K tweeted.

"Terribly sad news from South Kashmir today. An accident and a militant attack have left a trail of death and suffering. I condemn the militant attack in Shopian unequivocally in which Sunil Kumar was killed and Pinto Kumar injured. My condolences to the family," he said.

BJP spokesman Altaf Thakur said, "Strongly condemn the dastardly act of terror on innocent minority community members at Shopian in which Sunil Kumar was killed and another injured. Terror has no religion. Killers should be punished." People's Conference chairman Sajad Gani Lone condemned the attack as a "heinous act of violence" and expressed his condolences to the family of the victims.