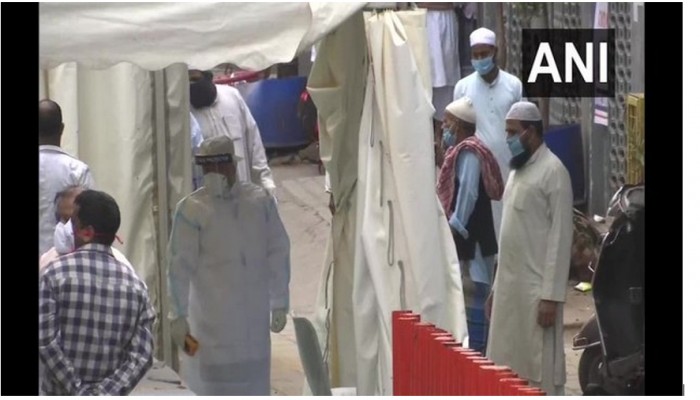 India is under a month-long lockout on account of Corona. As the world reels under the impact of the pandemic, with more than 2.8 Mn impacted and 1,82,000 lives lost; India is braving it, with 20471 Corona-infected people, more than 681 dead in two months since the first case was detected. The sudden lockdown threw the lives of all Indians in disarray as social distancing was the only way to handle it, in absence of any known cure or vaccine.

We had long queues of migrant workers marching solemnly to their homelands, mostly daily wage earners, with kids on shoulders as world’s largest Railways network came to a sudden, screeching halt. Some alleged rumors and Delhi Government arranging for buses to drop the poor laborers outside the city limits did not help the human crisis. Good Samaritans came forward with their helping hands to those who were stuck in the cities staring at uncertainties.

The Government came with huge schemes of Direct Fund Transfer for those who have lost their livelihood, at least till this whole thing settles down. Proactive state governments, unlike Delhi Government, like the State of Telangana, Andhra Pradesh, Karnataka and Uttar Pradesh brought in some solace with Food and ration delivery, cash transfer, Buses to carry the migrants on the roads to their homes, apart from innovative steps like UP Government acquiring unoccupied townships for those caught in the middle of Lockdown, directly transferring more than Six-Hundred Crore Rupees to around 2.7 Million poor stranded people in the state of UP. India has been praised world over for the steps taken and unusually great discipline demonstrated by the people of the world’s second largest population on this globe.

This clubbed with other steps undertaken by the Government, like screening of all international travelers to India, blocking International travel, and starting universal screening across the international Airports. Quarantines started quite early while as a responsible and secular democracy, India continued to airlift her citizens from China, Iran and other Corona-impacted places. An Article on World Economic Forum Website credited the limited spread of Corona in India to the proactive and prompt measures undertaken by the Government of India (https://www.weforum.org/agenda/2020/03/quarantine-india-covid-19-coronavirus/) and rounded it off with a very optimistic and positive note stating- If the statistics continue to show a relatively low infection rate, the India will have helped lead the way in containing the virus.

Then came the disastrous Tablighi Jamaat mess. The Delhi Government had imposed a lockdown before the imposition of lockdown on 24th of March, 2020. The Government of Delhi had already imposed a ban on any gathering of more than 50 people in Delhi and more than Eight-Thousand people including foreigners from COVID infected nations gather in the Nizamuddin Markaz, throwing all the instructions of the government out of the window. The Markaz or the convention was called in by the Chief or Amir of the Tablighi Jamaat, Maulana Saad. When Mecca and other Holy sites of Islam were shut down in the larger interest of Humanity to contain Covid-19, Maulana Saad and his followers decided to continue with the Markaz which included many attendees from abroad. In India, till now, community spread is limited and a majority of those infected are with history of foreign travel. In such circumstances, this obstinate persistence of the Tabligh to continue with the convention is not only criminal, it is also genocidal towards the people of India.

While most of India, with its secular Hindu leanings has taken it as a criminal act of a particular section of the community in a very limited manner (even Tabligh’s break-away group of Maulana Zubair decided to follow the lockdown directives of the Government), there has been an attempt by few Muslim intellectuals to paint any attempt to criticize Tabligh as Islamophobic, thereby spreading the blame and wrapping it around the Muslim community as whole. That it was a blatant and criminal stupidity of the Jamaatis which continues as the quarantined people of Tabligh continue to harass the health workers and officials does not make it better, not to mention having resulted in 30% of COVID cases in India, almost nullifying the pain the poorest of India have gone through to control the pandemic.

Some have come out with the data of non-Muslim events which happened BEFORE the lockdown to justify the obstinate absurdity of the Tablighi which almost seems conspiratorial. Yesterday a Dalit man was shot dead by two Muslim men in Lucknow because he criticized the Tablighi Jamaat. I would hazard a guess that these two men were somehow made to believe by Intellectuals that any opposition to Tablighi Jamaat is an opposition to Islam. Tablighi Jamaat is a movement started in 1927 by Muhammad Ilyas al-Kandhlawi in the Mewat region. This was possibly a reactionary movement started to contain the trend of Rajput who had converted to Islam under Mughal rule, returning back to the fold of Hinduism as the Islamic rule fell and under two centuries of British rule, the Mewati Rajputs began converting back to their initial faith.

The basic idea of the Jamaat is to return to the sixth century, and take back the teachings of the Prophet to its purest forms. It is really amusing that the standards of sixth century life to which Tablighis bind themselves would not be possible even for those like Wall Street Journalist Rana Ayuub who is known to follow a modern lifestyle. Their aim is to get the society reconstituted around the life of 7th Century Arabia. Under Tablighi Jamaat, women strictly subservient and second string, writes Khalid Hussain in an article dated August 13th, 2006 in Daily Mail.

He also writes that the Tablighis view Muslims as being under the threat of modernization. Invested intellectuals like Arfa Khanum of The Wire and Rana Ayyub of Wall Street Journal have tried to project some Sufi or ascetic kind of image for the Tablighis in order to create the narrative of Islamophobia and discredit written complaints filed by the Nurses facing abuses and bad behavior of Tablighis in the Quarantine. The fact remains that Maulana Saad of Tablighi Jamaat had a Luxury farmhouse on the outskirts of National capital. Muhammad Tarar, who was President of Pakistan and Javed Nasir, the ISI chief in 1990 both were Tablighis. The activities of Tablighis are well funded by the Global Wahabi communities like World Muslim League (https://www.meforum.org/686/tablighi-jamaat-jihads-stealthy-legions). The French Intelligence calls the Tabligh Antechamber of fundamentalism, while US intelligence calls it recruiting ground for Al-Qaeda (https://www.nytimes.com/2003/07/14/us/a-muslim-missionary-group-draws-new-scrutiny-in-us.html?searchResultPosition=5).

While Taglibhis being apolitical, may not directly be training terrorists but they create potential hires who believe Islam is all the time under attack and whose world-view is still hanging in the Seventh century. Most men arrested in Godhra train burning including Maulana Umarji were members of Tablighi Jamaat. There are numerous references of Tabligh-inspired fundamentalism resulting in Wahabi-inspired terror. Those who found folly in some people illogically claiming the usefulness of Cow products in combating Corona, call these retrograde men who have since also been banned from an event in Indonesia, an Islamic nation, simple men of faith. The faith in taking the world back fifteen-hundred years in itself speaks about irrationality and illogical obstinacy. When Voltaire said, “Those who can make you believe absurdities, can make you commit atrocities.” He wasn’t way off the mark.

It is therefore a pity that Ms. Ayyub makes this evil attempt to link ordinary Indian Muslim with Tablighi Jamaat. And when such people like Ms Ayyub who is light years away from the Tablighi Idea of a seventh Century woman defend Tablighis as a Muslim after their blatantly criminal act in the times of pandemic, they create an environment where rest of Indians start looking at even non-Tablighi Muslims with suspicion. As Sr. Journalist, Javed M. Ansari brilliantly puts it in his opinion piece on NDTV (https://www.ndtv.com/opinion/no-excuses-please-for-what-happened-at-nizamuddin-markaz-2206850) that in this matter of Tablighi Jamaat’s audacious and criminal obduracy in the times of a killer pandemic, “there are some important lessons which the Muslim community can ignore only at its own peril. We can no longer afford to exist in isolation. The way forward is integration and assimilation with social responsibility. The community cannot be at odds with the rest of the country. If Muslims want equal opportunities, they need to be equal participants in the national effort. As Muslims, we cannot and must not be seen as obstructionists who are perennially at odds with the system.”

He also laments people like Rana Ayyub who elsewhere and in Washington Post, creates (https://www.washingtonpost.com/opinions/2020/04/06/islamophobia-taints-indias-response-coronavirus/)  a narrative of victimhood to defend an absolutely unforgivable sin that puts millions of lives at risk, when he, with such great honesty writes that, it shames me that a section of my fraternity has fanned cult of animosity by constantly peddling conspiracy theories. In doing so, people like Ms Ayyub and some educated Muslims create and Us Vs. Them narrative when we should all be standing together. They peddle fake pictures of last year Ramnavami from Bengal, of 2018 congregation at some temple in Andhra to create ‘Your culprit-Our Culprit’ plank. Sadly by the time their lies are caught, they create an environment of mistrust and a season of dark suspicion hangs over India with death lurking from behind it.

They, in the process, condemn people like Javed Ansari and Zakiya Sayed (the Doctor in Indore who went in the slums inhabited by the Muslims looking for attendees of Tablighis Jamaat and was attacked by the people there) to a life of friendless alienation in their own country where for Muslims, they are not Muslim enough as they refuse to live in a make-believe Islamic nation existing within India with its own rules, and where they are not Indian enough because they are Muslims who are represented by people like Rana Ayyub. Now there are many who have hooked on to the Pakistani propaganda running a twitter campaign, doxing the compatriot Indians doing honest work in Islamic Nations, complaining about to the authorities there about their comments made in private capacity.

This is a Pakistani agenda to create a Gulf between Gulf nations and Indians, two people who since the ancient ages have had excellent relationship of mutual respect. They don’t realize that as they rally local Muslims to endanger the life of fellow Indians, they are further endangering their relationship with fellow Indians with whom they live in India. Maybe, they realize but are least bothered for they are the kind who would send octogenarian women of their community to camp on the streets in severe cold, even unconcerned about the deaths of infants, while holidaying and welcoming the New Year themselves in the salubrious environs of Europe. They create a sad sense of othering for Indian Muslims like Mr Javed Ansari and Zakiya Saeed who would find more closeness to an Ashfaqullah Khan than a Sir Syed Ahmad Khan. That is the reason why their agenda to wrap the ignominy of Tablighi around entire community needs to be fought back by Hindus and Muslims of India alike.