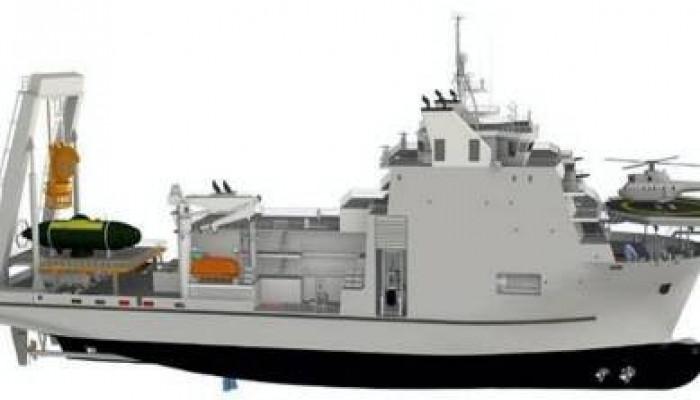 India's Chief of Naval Staff, Admiral R. Hari Kumar launched two Diving Support Vessels (DSVs) built by Hindustan Shipyard Ltd at Vishakhapatnam for the Indian Navy. The launching ceremony had the Navy Chief as the Chief Guest. The vessels were launched in a traditional manner by Mrs. Kala Hari Kumar, President of the Navy Wellness and Welfare Association (NWWA), who officially named the vessels 'INS Nistar' and 'INS Nipun'.

"Matter of great pride & privilege to be here on this historic occasion of the launch of 2 sophisticated & key platforms of Indian Navy. Once commissioned, these indigenous Diving Support Vessels will serve as INS Nipun & INS Nistar," said the Navy Chief at the launching ceremony.

According to the Indian Navy's press release on its website, the Diving Support Vessels (DSVs) are the first of a kind and are indigenously designed. The Indian vessels are 118.4 meters long, 22.8 meters at the broadest point and will have a displacement of 9,350 tons. The contract between the Indian Navy and Hindustan Shipyard Ltd was signed earlier in September 2018 for more than Rs 2,300.00 crore.

The indigenous DSVs are set to be deployed for deep sea diving operations. Additionally, the vessels are equipped with the Deep Submergence Rescue Vehicle (DSRV), which remarkably enhances the submarine rescue capabilities of the vessels.

Furthermore, the vessels are said to be capable of sustained patrolling, conducting Search and Rescue operations and carrying out Helicopter Operations on high seas. Indian Navy officials further stated that while a submarine is a significant strategic asset, it is still vulnerable to action damage, requiring extensive diving for immediate repairs and a requirement for undertaking search and rescue operations that require the availability of a credible and suitably equipped platform.