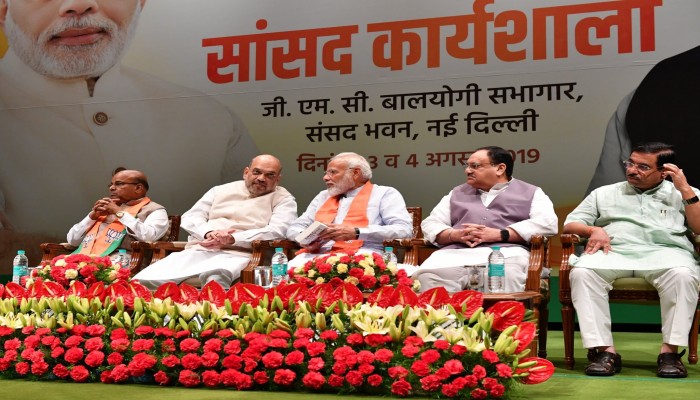 Since being entrusted with the responsibility of governing India in May 2014 (and then again in May 2019 with an even larger majority), Prime Minister Narendra Modi-led government of Bharatiya Janata Party (BJP) has been evolving an innovative approach to old age security.

According to the United Nations, India’s population in 2019 was 1366 million, with yearly population increase of 1.0 %; Total Fertility Rate (TFR), which measures the average number of children a woman bears during her reproductive years, of 2.2, within striking distance of the replacement rate of 2.15; and median age of 27.5 years. (https://population.un.org/wpp/). Accessed on October 5, 2019

But India is ageing at a moderately rapid pace.  According to the United Nations, India’s population over 65 is projected to increase from 84 million in 2018 to 223 million in 2050 ,an  increase of 2.7 times; while population over 80 years of age will increase by 3.25 times.https://www.un.org/development/desa/publications/world-population-prospects-the-2017-revision.html  Accessed on October 5, 2019.Indeed, in 2050, demographic trends will lead to the two largest population cohorts in India being women and men respectively who will be 70 years plus.

India thus needs to not only address the needs of very large absolute number of the elderly (a critical but often overlooked factor, especially in international comparisons and in drawing lessons), but also to moderately rapid pace of ageing, which provides policymakers a relatively short time to construct old age security systems.

Since independence in 1947, India has built a complex but fragmented system of social protection.  Its limitations have been relatively limited coverage, lack of professional approach, and system-wide perspective, relatively small accumulation of total pension assets (around 20 percent of GDP), and limited use of technology (Asher, 2018)

Innovative approach to old age security since 2014 are identified. This approach deserves to be widely studied as it is consistent with India’s context-specific social, cultural, economic, and political realities. It incorporates linkages which are not found in social protection literature, such as between Ujjwala Yojna, better maternal and child health, and i potential income earning opportunities, improving economic security.

The purpose of this column is to identify key components, and indicate some of schemes or programs initiated. The column is not intended to do an assessment of these schemes.

It recognizes that reducing the expenditure for essential services is equivalent, even better as risk of increased cost of services is borne by the government, than provision of higher income.

Indeed, healthcare services are a major source of financial stress among the population, particularly the elderly.  The government estimates that nearly 63 million people of India are in debt due to health care expenses and a third of the population is driven below poverty line due to the same.  https://www.governancenow.com/news/regular-story/63-million-indians-are-in-debt-due-healthcare-expenditure-report.

According to the Indian official sources, in 2016, life expectancy at age 60 was 17 years for men, and19 years for women. (https://economictimes.indiatimes.com/nation-world/how-long-will-an-indian-live-after-60/this-is-how-long-you-will-live/slideshow/55092990.cms) Accessed on October 5, 2019.  Age -related ill health episodes are likely to increase as life expectancy at age 60 increases. Those above 75 years of age also need elderly friendly amenities for mobility, and social interactions.

Selected examples of the service provision component are provided below.

There is an insurance cover of INR 0.5 million per family per year. As less than 10 percent of the Indian population has health insurance, this Scheme brings welcome relief to the covered beneficiaries who are from the bottom half of the income scale. The treatment, in approved private and public hospitals, is nation- wide, and therefore portable.

This is of major importance as internal migration in India is substantial. The Economic Survey of India 2017 estimates that the magnitude of inter-state migration in India was close to 9 million annually between 2011 and 2016, while Census 2011 estimates the total stock of internal migrants in the country (accounting for inter- and intra-state movement) at 139 million. These are the potential beneficiaries from the portability provision of the AB-PMJY.

No amount needs to be paid by those hospitalized. The hospitals receive reimbursement according to the set rates from the government.

There has however been concerns expressed by approved hospitals that the set rates are too low in relation to cost (even when improved scale economies are taken into account), and that lag in receiving the reimbursement needs to be significantly reduced.

It is reported that the AB-PMJAY is to be extended to senior citizens over 75 years of age, with the premium being paid by the Union Government. This will further improve health care security of the elderly, reducing their expenditure needs.

An integral part of AB-PMJY, often overlooked, is the setting up of 0.15 million Health and Wellness Centres (HWCs) across the country, for which staff training, and building of infrastructure is being undertaken. This will help fill a vital gap in India’s healthcare system, and help increase the supply of skilled health professionals.

It has been only about a year since the scheme was launched. In one year of its operation, about 0.5 million hospital treatments have been provided without pricing at point of consumption. https://timesofindia.indiatimes.com/india/ayushman-bharat-programme-empowering-several-indians-pm-modi/articleshow/71591435.cms Accessed on October 30, 2019.

Since its launch, according to official sources, about 16,000 hospitals have been approved to provide treatment; 100 million e-cards have been issued, and about 17,000 HWCs have been made operational.

W.H. O. (World Health Organization)  is to cooperate with the AB-PMJAY on enhancing technical capabilities during the 2019 to 2023 period https://www.healthissuesindia.com/2019/10/11/world-health-organization-boost-for-ayushman-bharat/ accessed on November 5, 2019.

(ii) Janaushadhi stores across the country have been set up for affordable diabetes and other common medicines http://janaushadhi.gov.in/) October 5, 2019; price control on certain cancer and related medicines to make it affordable for the low income and for the middle class

(iii) The government initiated a housing scheme in June 2015, called Pradhan Mantri Awas Yojna, (PMAY). It provides subsidies for affordable housing to the urban and rural poor, with a target of building 20 million affordable houses in urban areas by 31 March 2022.

(iv) Ujjwala Yojna to provide natural gas for cooking to reduce indoor pollution, and reduce time and energy of women spent on collecting fire wood was launched in May 2016. This saving of time can be potentially used to generate income from home by Family members, including the elderly.

As of September 2019, 80 million natural gas connections have been provided, primarily to low income families https://www.livemint.com/news/india/nda-ujjwala-surpasses-targets-provides-80-33-million-lpg-connections-1568006076964.html accessed on October 5,

For the schemes outlined above and similar schemes, it is essential that robust actuarial studies of the future fiscal costs (technically contingent liabilities) of the Union and State governments, as they co-share the costs, be conducted frequently, and taken into account in future changes in the schemes. Introduction of some co-payments for the services over time merits serious consideration.

The second component involves attempts to bring greater professionalism, rationalization, and systemic perspective to social security organizations. This is usually a neglected area in the pension literature. Managing political economy, including that of the social security is vital for this component.

Thus, there is a proposal to appoint a body with requisite skills to manage INR 10 trillion (USD 143 Billion) of funds of the Employees Provident Fund Organization (EPFO). https://economictimes.indiatimes.com/news/economy/policy/govt-proposes-to-corporatise-epfo-esic-appointment-of-ceos-for-first-time/articleshow/71188466.cms accessed on October 5, 2019

The assets of INR 3.3 trillion (USD 47 Billion) of the National Pension System (NPS) (http://www.npstrust.org.in/assets-under-management-and-subsribers) Accessed on October 5, 2019,  and growing rapidly, are already being managed professionally, with sound architecture for long term savings.

There has been an agreement between the NHA (National Health Authority) and ESIC (Employee State insurance Corporation), a mandatory health insurance scheme for private sector workers, to get treatment with the approved hospitals of AB-PMJY. This will widen choice, and improve scale economies of approved hospitals.

There is a strong case for setting up an autonomous National Centre of Retirement Behavior Research, involving cross-disciplinary professionals in economics, sociology, geriatric care, medicine, actuaries, finance, organizational behavior, and others.

Third, even as the coverage of pension schemes is expended, often with more targeted schemes for farmers, self-employed and others, in many of the schemes, the principle of co-contribution is incorporated resulting in self -selection.

The government’s fiscal costs are from its contribution, from revenue foregone through tax benefits (which are generous as contributions, investment income, and final withdrawals are not taxed, so-called EEE treatment), and from contingent liabilities. All three need to be better monitored and researched.

Aadhaar is the world's largest biometric identification system. As of November 2018, 1239, million Aadhar cards have been issued, covering about 90 percent of India’s population. https://www.livemint.com/Politics/FFdSf7BlL42zJ9H0jt9T6O/123-crore-Aadhaar-cards-issued-to-people-Govt-tells-Rajya-S.html Accessed on October 5,

India’s mobile technology, particularly for financial transactions, has been rapidly evolving. India has the potential to create over US $1 trillion of economic value from the digital economy by 2025, up from around US $200 billion currently. On October 5, 2019

JAM has been combined to provide direct benefit transfers to bank accounts, including those of the elderly. His has reduced transaction costs, and help reduce inclusion and exclusion errors.

In another illustration of use of technology, National Health Authority and Google are collaborating on the implementation of the AB-PMJAY Scheme,

In conclusion, the above four areas illustrate the innovative and integrative approach of the Indian government towards old age income security since 2014. The vision is to provide old age security on as nearly on universal basis as possible.

There are however many continuing gaps and challenges in coverage and access, implementation, record keeping, and cost of services and fiscal contingent liability projections. Much more research on these issues is needed.

The government has argued that data is new oil. It needs to put this into practice by making disaggregated data of various old age income security schemes on a regular and easy to access basis. Dashboards, while useful, are not a substitute for detailed data provision. The research community must also become much more pro-active in researching on these schemes.