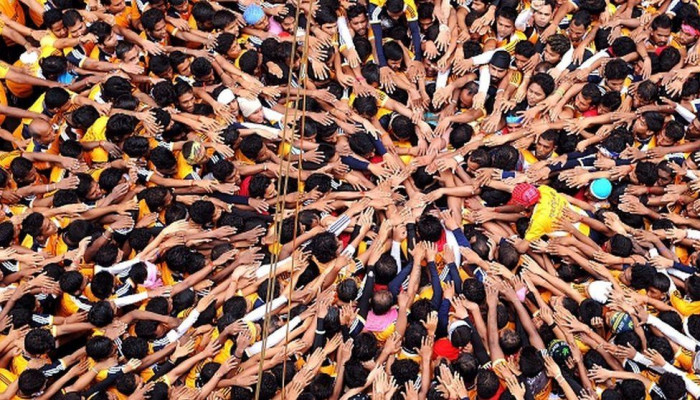 As the world welcomes the landmark of 8 billion persons, it may be useful to examine India’s demographic profile and the select policy implications arising from it.  Demographic trends affect every aspect of economy, finance, society, and polity. Indeed, analysts have observed that demographics is to economics what gravity is to physics. Therefore, a thorough understanding of emerging demographic trends for sound policies cannot be overemphasized.

The main data source used in this column is the United Nations, World Population Prospects 2022, regularly published by its Population Division1.

Figure 1 suggests the following. India’s total population has been growing since 1950, but the rate of growth has been slowing as shown by the flatter slope of the curve. Indeed between 2050 and 2075, India’s total population is projected to decline absolutely, albeit at a very gentle rate. The further the projections are made, the greater the variability in projections, as may be expected.

Figure 2 brings out more starkly the public policy and societal implications of total population projections of India and China. As compared to India, China’s population is projected to decline moderately rapidly after 2020-2040 period and may be only somewhat above the 1950 level in 2099. India’s population will begin to decline much later, and more gently, so by 2099 it will still have around 3.5 times the population it had in 1950. The two countries will therefore need to adjust their economy, society, diplomacy, and polity accordingly. These could have substantial geo-economic and geo-strategic implications for India and the world.

Broadly, western, and southern states had higher median age than India’s average, northern and most eastern states had lower median age. This implies that in strategies to cope with demographic challenges, variations across states would need to be considered.

Figure 6 provides data on India’s Total Fertility Rate (TFR) for the period 1950 to 2100.TFR measures the average number of children a woman produces over her lifetime. TFR of 2.15 is regarded as a replacement rate, implying that once this rate is achieved and sustained, the population becomes stable after three to four decades, assuming no net immigration. If TFR is sustained below 2.15 for a prolonged period, the population will decline, assuming no net immigration. In Asia, such decline is projected for China, Japan, South Korea, Thailand, Vietnam, and others.

The data for India exhibit declining TFR from a very high rate of near 6 to below replacement rate of 2.0, and stabilizing around that rate. Before 2025, India’s TFR is expected to be about the same as that of Asia, and remain there. India’s TFR has been below that of Southern Asia since the 1950s.

Figure 6 provides data on India’s TFR by States for 2019-20. Data suggest that India as a country has achieved a TFR below the replacement rate. Only Bihar and Meghalaya exhibit TFR above 3. Uttar Pradesh, India’s most populous state exhibited TFR of 2.4. It is making progress towards the replacement rate. Some large states, Maharashtra at 1.7 In the western part, and Odisha at 1.8 in the eastern part exhibit the same or lower TFR than the southern states. Therefore, an argument sometimes advanced that states in the southern part are unique in having low TFR is found to be without merit on empirical grounds.

The main implication is that as women have lower lifetime incomes than men, as they do most of the essential work which is not paid, retirement income arrangements must take survivors risk into account. Feminization of the elderly population is not just Indian but a global phenomenon.

The above description of India’s demographic trends suggests that India is ageing moderately rapidly. The first policy implication is that India, like every society experiencing ageing, must rely on improving total factor productivity and on extensive application of science which is universal to technology which is local. Mere increases in labour and capital are not enough for sustaining high growth in ageing societies.

Second, India’s aged population, both over 65 and over 80 years, are projected to grow rapidly. Moreover, the pace of ageing would be uneven across the country. This has major policy implications for health care as long-term healthcare arrangements will be needed. Uneven ageing will also have implications for the cross-state migration of workers.

Policy initiatives for ageing should recognize that the elderly require accessible and affordable services of reasonable quality and that monetary aspects alone, though very necessary, should not be over-emphasized.

Since 2014, the government led by Prime Minister Modi has recognized this aspect. This is exemplified by such schemes as the Ayushman Bharat Health insurance scheme and wellness centres across the country), Ujjwala Yojna (clean cooking gas scheme) Pradhan Mantri Awas Yojna (for housing), Jal Jeevan (for tap water of good quality at home) Janaushadhi stores (provision for affordable common medicines) and several others. These initiatives centre on process reform by service-delivering organizations, and by up-to-date technology adoption in research, features which have been underappreciated in policy and academic research circles. Most of the above schemes have their own extensive and UpToDate performance dashboard. An overall dashboard of schemes may be found at https://transformingindia.mygov.in/performance-dashboard/.The data on these dashboards provide granular data for much data-intensive research at all levels of India.

The contingent liabilities of these schemes on the fiscal resources however need to be better researched and documented. For the orderly management of liabilities, a sinking fund to meet these liabilities also deserves serious consideration.

The policies for the elderly need to rely as much as possible on having the elderly age at home or to as near to home as feasible. The average number of persons in a household was estimated at 4.4 in India in 2022; while in 2021, the corresponding number for the OECD (organization for Economic Cooperation and Development), which, has more pronounced ageing trends than India was much lower, ranging between 2 and 2.5.

India’s ageing policies must continue to nurture the centrality of family and local community and their responsibilities for aged care, with the state providing a conducive environment, including elderly-friendly infrastructure and amenities, and promoting socio-cultural norms arising from India’s civilizational ethos, conducive for such responsibilities. Raghuvendra Tanwar, Chairperson of Indian Council of Historical Research has argued that research at Rakhigarhi site of Harappan civilization suggests that India is the oldest civilization in the world, and is mother of democracy. (Times of India, Mumbai edition, November 18,2022, p. 14).

Very selective institutionalized aged care options will still be needed. As far as feasible, social enterprises and not-for-profit organizations should be encouraged in this sector.

Third, the major policy implication is to devote greater resources to develop skill sets and infrastructure for studies in gerontology, which examine all dimensions of ageing, particularly, non-financial aspects, which may impact the well-being of the elderly.

The analysis of India’s emerging demographic trends strongly suggests a need for a mindset change from that India as a young country to India having about two decades to prepare for a moderately ageing population. This is like a change in mindset from India being a rural country, to prepare for the time when the majority of India will be urban or para-urban.

As persons live longer, life insurance costs decline, but annuity returns, pension, and health care costs increase sharply. These can not be managed without extensive investment in data collection and data analytics. Only granular data can provide information for the proper pricing of various insurance and pension products.

The analysis also suggests that demographics encompass wide areas of economic behaviour and society. Moreover, with moderately ageing trends, gerontology studies need to be developed. It is therefore strongly urged to establish a National Centre for Retirement and Ageing Behaviour or any other suitably named centre. It should be staffed by experts in diverse fields, including those specializing in data analytics, and actuarial studies.

Innovative technology-driven schemes since 2014, providing essential digital, financial inclusion, health, water, medicines, cooking gas, property rights to housing and land, physical connectivity and others of the union government, and similar schemes of state governments designed for ease of living, and for reducing household expenditure, including those of the elderly have received insufficient attention of the researchers. Good quality, timely, and granular data on these schemes are available but have not been much utilized. This is also an area which needs to be addressed by the researchers.