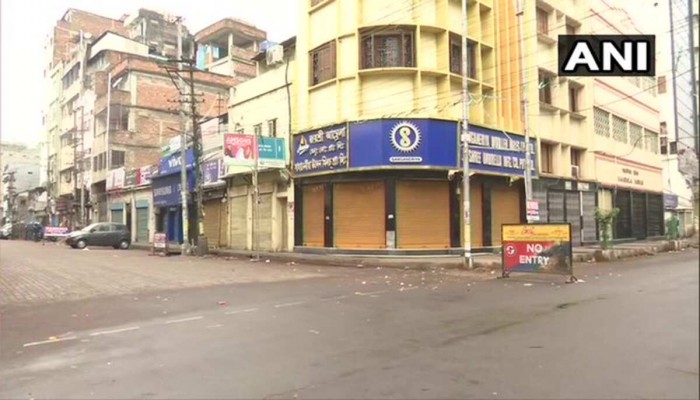 Unlike the country wide imposition of lockdown of Emergency days, today 1.3 billion Indians voluntarily embraced Janata Curfew, self-imposed curfew. Complying the twin mantras of “resolve” and “restraint” advocated by Prime Minister Modi to break the viral transmission chain, Indians pointedly underscored the importance of “social distancing”. By 5pm, reiterating solidarity, people thronged to balconies, windows and doors expressing gratitude to doctors, health workers, sanitation workers, paramedics and essential services personnel. Heart-warming applause in the form of tali, thaali, shankh naad, traditional bells, dholaks against the background of the Gayatri mantra in some places has connected the citizenry in an emotional bond. Reverberating sounds symbolised harmony, resilience and the battle readiness of the people. With their categorical approval, ordinary citizens have pledged to work in unison.

India is home to one-sixth of the humanity. Prevention of viral outbreak in this densely populated nation is a huge challenge. Instead of resorting to characteristic Chinese way of draconian and aggressive crackdown, as a leader of masses, honouring the precedents of a democratic society, Modi made an earnest appeal to countrymen.  Urging the nation to come together, Modi psychologically readied the citizens for an impending graded lockdown.  The test of real leadership is the moments of crisis. Standing tall and leading from the front, Modi galvanised entire nation. Mobilising the nation for an unprecedented health emergency, Modi sought the voluntary participation and cooperation of people. In the process, he has proven to the World how a diverse, large and often chaotic nation like India can work as a single unit in times of need.

India is about to step into the crucial third phase of the community spread and an imminent surge in infection rate is anticipated. While critics expressed concerns of India’s readiness and limited resources to tackle the viral outbreak, Modi advocated the smart strategy of social distancing. Janta Curfew is thus, Modi’s way of announcing its long battle against the Chinese virus. Instead of coercing people through a regimental approach, in synchrony with state governments- sealed the state borders, cancelled interstate buses, passenger trains and suspended local metros. Simultaneously, government identified 75 districts, the hotspots of viral infection for imposing section-144. In sharp contrast to stringent and spontaneous clamp down, Modi government adopted a slow and graded response, giving leeway for citizens to adjust to new statusquo. This will eventually go a long way in containing viral spread.

Modi’s second term has been full of surprises and replete of deliverance on various fronts. Like the iconic legislations which changed the political, social, economic scenario, Prime Minister’s approach to the health emergency is bound to overhaul the public health services. In wake of viral outbreak threat, government proposed settting up corpus fund of Rs 3000 crores towards manufacturing of Active Pharmaceutical Ingredients (API). Unlike the first World which is caught napping, India upped its guard just days after the news of Chinese viral infection made to the headlines. While WHO dithered and wasted precious time in designating the viral outbreak as a pandemic, India enforced massive thermal screening, isolation, quarantine and managed to keep the infections low.

Raising the guard, Modi launched, Janata Curfew, to underline the importance of staying at home, restricting unnecessary travel and socialising. People firmly endorsed this landmark event which spurred the nation to embrace social distancing and empathically cooperate with government agencies to keep our nation infection free. By entrusting the citizens with the responsibility of serving the nation by staying at home, Modi successfully sent the larger message to each and every citizen of the nation.

Indian Prime Ministers thus far are known to have special appeal among restricted sections of the society. Modi has defied all class boundaries. As an orator of par excellence, he touched the hearts of millions of Indians spanning all sections of society. With his unparalleled communication skills, Modi managed to bring the diverse Indian society together. The success of this massive people’s exercise stands testimony to this fact. Unruffled by the massive disinformation campaign that feeds on negativity and pessimism, Modi has reposed faith in Indian masses. Amidst pessimism, defiance and callous attitude of the entitled class, Modi appealed for public support in his current battle against Chinese virus. People have resoundingly responded to his exhortations. Over the past six years, Modi has created a feeling of belongingness to the nation among the citizens. He believed in collective functioning. For centuries, colonists trampled Indians with -Divide and Rule Policy, and Modi sowed the seeds of “Together we shall overcome”.

By winning the confidence of people, Modi has earned the support of the people and overcome a major barrier. Pray people continue to respond in one voice and collectively fight the Chinese virus pandemic.