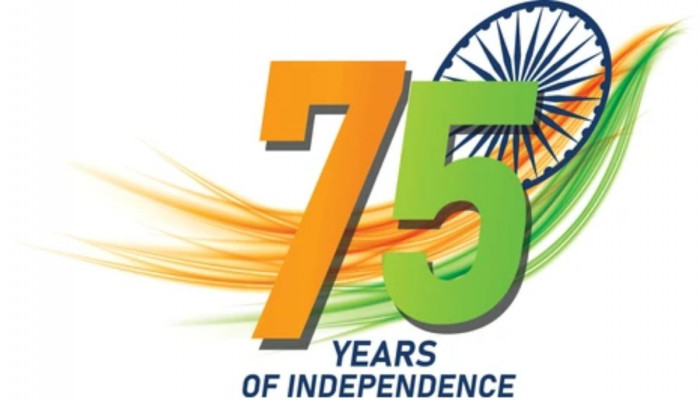 75 years ago, a civilizational nation, Bharat (India), emerged after 1000 years of enslavement. Her enormous wealth was lost, people were left illiterate and had little to offer to the world. Moreover, the nation, divided along religious lines, was thought to be so diverse that many world leaders predicted an imminent disintegration.  75 years later, despite our perceived diversity, we stand rock solid in the love and service of poonyabhumi Bharat.

Freedom did not come on a platter. We fought for it. My own grandfather went to prison 16 times in the battle for freedom. He was a teacher who taught students for free, despite his own poverty and had hoisted the tricolor on the eve of independence at Khulna, which later went to Pakistan (now Bangladesh). Our ancestors fought for freedom, not just for their rights, not because they believed that colonialism was wrong, but also because they took pride in the ancient civilization that was handed over to them from their ancestors.

The political independence of Bharat in 1947 did not mean financial independence.  For that to happen, we are required to decolonize our minds and the narratives that follow. We are required to build technologies and businesses through which we can offer something extraordinary to the world that would inspire the population. For a nation with no market then, our scientists and engineers set out to experiment and build institutions the nation can be proud of even now. With personal sacrifice, sincerity and honesty.

Before independence, scientist Acharya Prafulla Chandra Roy had built a technology company, one of the first in Asia and had urged scientists and engineers to bring financial freedom through entrepreneurship. Post-independence, in a socialistic regime, closed-door economy, limited growth mocked as the "Hindu rate of growth" and with limited foreign reserves, great souls like Narayan Murthy had founded Infosys. The company struggled in the first 10 years, but as Prime Minister Narasimha Rao opened up the economy, on the heels of the nation's default in 1991, the company and the sector went global. Bharat now had something to offer to the world- Information Technology services. Such is the impact of one Narayan Murthy, the strong reputation that it created for Bharat, that today many CEOs of the Silicon Valley companies in the US are of Indian origin. The IT sector has made Bharat a global talent pool to reckon with.

Three decades later Bharat now leads in many areas of technology. During Covid, Made in India vaccines were the only hope for many nations across the world. The Pharma industry in Bharat is one of the largest today globally. Our pharma prowess also helped us in eradicating polio and reducing the cases of malaria significantly during the last 75 years. And not just in pharma, but across many high-tech sectors, like Space, Bharat is a significant player. ISRO, an institution founded through the sacrifice of Vikram Sarabhai, is a global leader in satellite launches, the first to find water on the Moon as part of her Chandrayaan-1 mission and now with significant private participation in the space sector, is now planning manned missions and space tourism.

Not just a few sectors, today across the board, technology startups are springing up. Bharat is the third Startup ecosystem in the world with more than 70,000 Startups. There are more than 100 unicorns and each unicorn is a billion-dollar company. This is spilling over even in the field of defense.

At the time of independence, Bharat was mostly importing defense equipment. Even up to recent times, basic items like bullet proof vests used to come from abroad. In recent times, the political will in the form of Atma Nirbhar Bharat under the leadership of Prime Minister Narendra Modi is changing that reality. From indigenous fighter jets like Tejas, to aircraft carriers to homemade howitzers, we have come a long way. The defense exports have also increased substantially to more than 1.5 billion USD from almost nothing a few years back.

But what defines Bharat is not the technology and the businesses, reimposing her as the knowledge capital of the world, but the belief of the leadership in her ancient past. That test of faith has been retested again and again. In 1998, when Atal Bihari Vajpayee allowed the Pokhran Nuclear tests to happen, inviting sanctions, he had just taken over the Prime Ministership. He staked his position, the party and the ideology it represented, but stuck out to establish Bharat as a Nuclear Nation with no first use policy, despite the sanctions that followed. Today it secures us.

The defense forces today have opened up the combat space for women. We have women pilots doing sorties with our Made in India fighter jets and in the civilian space Bharat leads with the most number of women pilots in the world. Percentage-wise, Bharat has around 12% women pilots compared to 5.5% in the US and 4.7% in the UK. Our women athletes shine in every world event. Bharat has around 30% engineers who are women compared to around 20% in the US and 18% in the UK. Women scientists in Bharat, head prestigious defense projects like Tejas and space missions. Our women CEOs head global companies and homemade Unicorns. Bharat today vibrates in Maa Durga spirit, despite all that naysayers globally have to say.

Bharat today remains relevant in the face of the most important problems the world encounters like climate change and international peace and security including energy security. In a short time, Bharat has built up a solar capacity of around 57 GW out of the total power capacity of 404 GW. With 121 nations on board, she has created an international solar alliance. Today Bharat is leading the world in Green Hydrogen initiatives, EVs and other renewables. Bharat has electrified 80% of her railway system to reduce the use of fossil fuels and is leading the world to find ways to reduce the global carbon footprint. And in the midst of all these, the nation ensured that all homes, even in the most far-flung areas, receive electricity, are connected through mobile and have access to financial services. Every person who has a bank account has become a national movement and the number of digital transactions is the highest in the world, showing a way for the world to pursue financial inclusivity.

As a civilization which withstood invasion after invasion, Bharat has remained an inclusive society, despite contrary conditions prevailing in the neighborhood. In the last 75 years, the people have reunited with their ancient roots, be it Yoga or Ayurveda. Today, the International Yoga Day on June 21st is celebrated worldwide as a testament to the contribution of ancient Bharat. Bharat always represented an idea where one can live harmoniously with nature, where knowledge is celebrated and where one becomes a seeker. A place where sacrifice for something bigger than oneself, and for the welfare of others, is given the highest value. A civilization where valour as in Mahabharata, and given in the Bhagavad Gita is for the defense of values known as Dharma. Bharat is a place more than 30,000 years ago our ancestors painted the horses in the Bhimbetka caves, where the first drainage system in the world came up in Mohenjadaro Harappa, where the first residential University stood up in Taxila, where the world came to learn at Nalanda is finally reconnecting with her roots.

How we use this connection with our past, to solve the problems of present Bharat and thereby the rest of the world will define the next 25 years of this ancient nation. As the youngest nation in the world, how we train our people, and build the human resources to take advantage of the demographic dividend, will set our destiny.