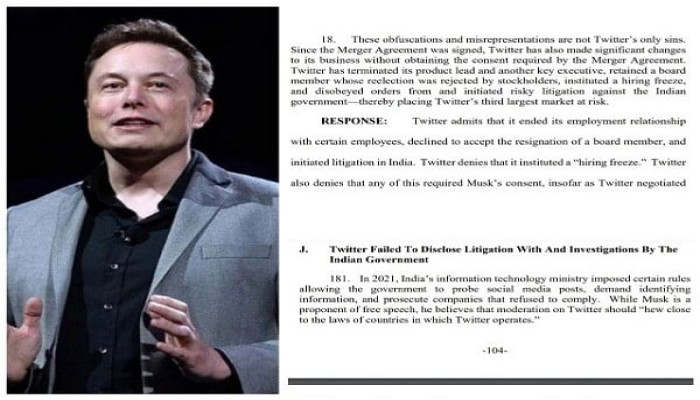 Tesla CEO Elon Musk, who is locked in a court battle with Twitter over a failed acquisition bid that Twitter now intends to force through, said that the social media giant jeopardized its third largest market by failing to disclose “risky” litigation against the Indian government.

In a countersuit in a Delaware court which was filed under seal last Friday and made public Thursday, Musk also claimed that he was “hoodwinked” into signing the deal to buy the San Francisco-based social media company.

“In 2021, India’s information technology ministry imposed certain rules allowing the government to probe social media posts, demand identifying information, and prosecute companies that refused to comply. While Musk is a proponent of free speech, he believes that moderation on Twitter should “hew close to the laws of countries in which Twitter operates” read a portion of the legal filings in the Twitter Vs Musk lawsuit, as posted by the New York Times tech reporter Kate Conger in a series of tweets.

To Elon Musk’s averments in the court filings, Twitter responded that it “respectfully refers the Court for their complete and accurate contents. Twitter lacks knowledge or information sufficient to form a belief as to the truth of the allegations,” and said it “therefore denies them on that basis.”

Referring to a petition filed in Karnataka High Court in July, Musk also objected to Twitter’s failure to disclose litigation against the Indian government.

“Twitter avers that it has challenged certain blocking orders issued by the Indian government under Section 69A of the Information Technology Act, directing Twitter to remove certain content from its platform, including content from politicians, activists, and journalists, and that Twitter’s legal,” the company said in its response.

Twitter, through its lawyer at the Karnataka High Court, said that its India business would close if it complied with Indian government orders to block content that competent authorities had deemed illegal. The High Court had issued notices to the Centre and adjourned the hearing for August 25th.

The microblogging website and the world’s richest man are now heading to trial on October 17 after Musk sought to abandon his deal to acquire Twitter over what he says is a misrepresentation of fake accounts on the site.

Twitter is trying to compel Musk to follow through on the deal while accusing him of sabotaging it because it no longer served his interests.

Earlier in April, Musk reached an acquisition agreement with Twitter at USD 54.20 per share in a transaction valued at approximately USD 44 billion.

In May, Musk put the deal on hold to allow his team to review the veracity of Twitter’s claim that less than 5 percent of accounts on the platform are bots or spam.