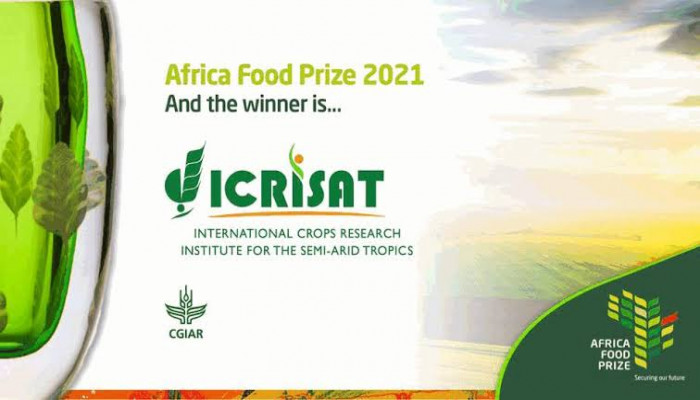 Hyderabad-based International Crops Research Institute for the Semi-Arid Tropics (ICRISAT) was chosen as the winner of the Africa Food Prize 2021 for helping 25 million farmers in 13 countries to improve income and food production.

Africa Food Prize 2021 was awarded at the Africa Forum for Green Revolution (AGRF) 2021 Summit in Nairobi, Kenya on September 8, 2021. The International Crops Research Institute for the Semi-Arid Tropics won the award for its Tropical Legumes Project that was implemented to improve food security across 13 sub-Saharan African countries.

The Africa Food Prize 2021 is a major recognition of ICRISAT’s work in Africa. ICRISAT Director General Jacqueline d’Arros Hughes said while accepting the award virtually that the recognition reinforces their belief that agriculture can be profitable for smallholder farmers.

"We dedicate this award to the smallholder farmers in the drylands of Africa, as they are the ones who inspire us with their patience and perseverance in the face of adversity," Hughes added.

The award carrying a cash prize worth USD 1,00,000 lays emphasis on the bold initiatives and technical innovations of the institute, which can be implemented across Africa to create a new era of food security and economic opportunity for all Africans.

The Africa Food Prize 2020 was awarded to Dr. André Bationo and Dr. Catherine Nakalembe for their exceptional contribution towards the promotion of food security across the continent.

As per ICRISAT, dryland ecosystems cover around 45 percent of Africa’s landmass and its supports almost half a billion people. However, these ecosystems are fragile and very prone to the effects of climate change and environmental degradation.

ICRISAT, which has its headquarters at Patancheru on the outskirts of Hyderabad, India, led a collaboration of national and international institutions to implement the tropical legumes project between 2007 and 2019.

Under the project, 266 improved legume varieties and around half a million tonnes of seed for a range of legume crops including chickpea, cowpeas, pigeon peas, groundnut, common bean and soybean were developed.

The new legume varieties have helped over 25 million smallholder farmers to become more resilient to climate change and to pest and disease outbreaks.