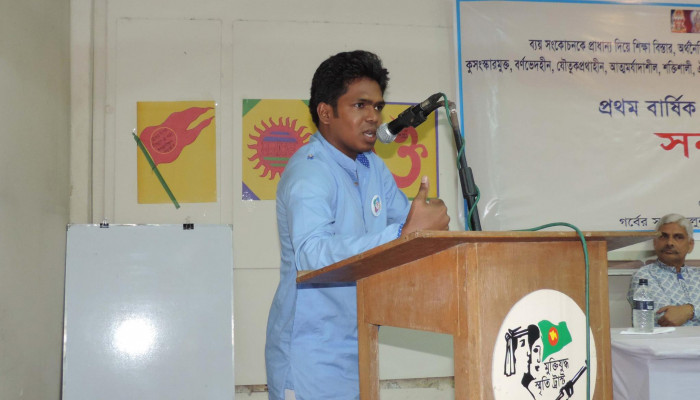 The persecution of Hindus in Bangladesh has continued unabated for generations. There is however a pattern to this persecution, which has a goal to drive Hindus out of their homes and land. The elections in particular have always been a critical event when the Hindu persecution peaks. Recently an incident came to light in Khulna, Bangladesh where a Hindu Headteacher of a secondary school in Paikgacha Upozilla, Ramendra Nath Mondal was harassed and his son Barun Prakash Mondal, who runs a Bhagavad Gita school locally, was attacked. The attacker, a local Member of Parliament, Akteruzzaman Babu, used his gang members to unleash terror on Barun and his father. The motive of the attack seems to be an effort on part of Akteruzzaman Babu to brandish his Hinduphobic worldview before the general elections next year in Bangladesh, with a goal to appeal to the fanatics, particularly because Barun runs a Bhagavad Gita school for poor children locally.

The incident happened when Akteruzzaman Babu asked Ramendra Nath Mondal  to appoint his person to a position within the school's system. The appointment being unethical was opposed by Ramendra Nath Mondal. On the 10th of June, Akteruzzaman Babu's gang members, notoriously known as the Romjan gang, harassed Ramendra Nath Mondal in front of the school staff and students. The next day, Barun was attacked and physically assaulted by members of the Romjan gang. His head was banged with a helmet.  He immediately went to the police station to file an FIR. However, it was initially refused. There was, however, a global uproar, with many of the concerned Hindus worldwide, tweeting in his support. This prompted the concerned authorities to register the FIR.

Barun is a Physics graduate and an entrepreneur who is also very active in empowering the local Hindus. He is often found to be at the forefront when it comes to helping the local Hindus. Whether it is natural disasters like floods or man-made attacks on the Hindus, Barun has never been found wanting. The attack on him and his family thus concerns all Hindus worldwide. A Twitter post in his support has been doing the rounds. His attackers are still at large adding to security concerns.