Hatred for Hindus is Real. Targeted Attacks on Hindus in Leicester is a Proof of it. 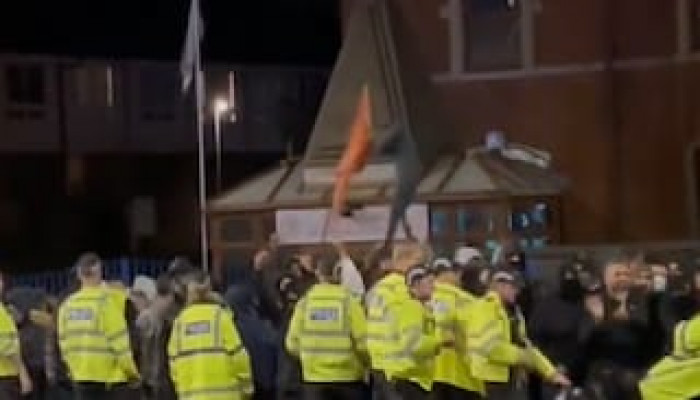 The ongoing targeted attacks on Hindus have inexorably brought to light that Hindus, Hinduism and Hindutva are under attack globally. The “Dismantling Global Hindutva” conference held around the same time last year was just a trailblazer offering an insight into a teaser of the larger vicious campaign at work to tarnish and attack Hindus across the globe. The string of attacks on Hindus across different continents demonstrates that Hinduphobia is a global reality.

There has been a marked uptick in the rise of hate crimes against Hindus in the so-called pluralist societies in the recent past. Some of these are whitewashed under the larger banner of attacks on South Asians in general. But a close analysis of reports suggests that a vast majority of these victims are Hindus. Racist slurs like “dirty Hindu”, “disgusting dog” and a hate crime against four women in Texas recently present a true picture.

While similar violations of civil rights and the hurling of racist slurs against any other community would have created a stir, the ecosystem dons stoic silence when the persons at the receiving end are Hindus. Interestingly, this kind of ‘selectively’ has been exclusively reserved for Hindus, one of the few surviving indigenous populations.

A spurt of attacks on the temples in the US that intensified during the Black Lives Matter protests in the US and truckers protests in Canada have remained unabated. Last fortnight, BAPS Swami Narayana Mandir in Toronto was defaced.

A US-based scientific research organisation, Network Contagion Research Institute, which studies misinformation, deception manipulation, and hate across social media channels observed, that there has been a 1000 percent rise in anti-Hindu attacks and attacks on the members of the community. It added that “Hinduphobia is one of the most complicated hatreds… is now a dangerous hybridisation of hate against the community”1. While the Liberal World and the pseudo seculars continue to deny the reality, from Canada to Chattogram, Hindus are facing an existential threat.

With the return of the Taliban regime, the last surviving generations of Sikhs were driven away from Afghanistan. The places of worship of the Indic religions were desecrated, vandalized and completely destroyed. But persecutions of Hindus or Sikhs hardly evoked any response. There wasn’t even a squeak of protest from the so-called saviours of human rights and paragons of religious freedom. Be it in India or anywhere else, the narrative is favourably disposed towards the Majoritarian religions.

Intriguingly, the liberal western World which formulates the global policies through its institutional dominance has a different yardstick for ancestral religious faiths. In India, they invoke a presumptuous majority-minority notion with a contrived premise that minorities are incapable of targeted violence towards the dominant majority. This indeed has been the basis for the UPA’s Communal Violence Bill.

If India and indigenous religions are to be judged by this majority-minority framework in other parts of the globe, Hindus being a global minority should be safeguarded from the discrimination of the majoritarian religions. But on the obverse, systemic Hinduphobia is on a rise. Rampant Hindu shaming and gaslighting have become the most sought-after academic exercise of Harvardian Leftist intellectuals.

To justify targeted attacks on Hindu Diaspora, the most successful micro minority, the leftists are redeploying the decades-old theories of their comrades attributing it to economic envy and income disparities. These ludicrous theories fail to address why Hindus in Pakistan and Bangladesh living in poverty are systematically persecuted. Clearly, the Hindus are targeted for their identity.

It would be churlish to believe that the success of Hindu society is generating resentment. The resentment is not of recent origin. For centuries, barbaric invaders raided Bharat, looted their treasures and most importantly completely destroyed founts of civilisational heritage, the temples. But a tribe of Marxist historians completely whitewashed all this wanton destruction and the nefarious plans for the extermination of indigenous civilisation post-independence.

In contemporary times, the invincible cabal of Marxist historians, pseudo seculars and Islamists, that dominate the media, academic organisations and policy-formulating institutions continue to rue that a threat to Hindus is a figment of imagination to lull the indigenous population into complacency.

The organised attacks on Hindus in Leicester enliven the fears of a lurking genocidal threat to a micro minority in a pluralist country like the UK. As per the Twitter handle, INSIGHTUK2, the banter that began on the eve of the India-Pakistan match, turned religious owing to a deliberate communal twist given to it by a religious leader. This fake news has accentuated the tensions during the Ganesh Chathurthi celebrations. Soon, the religious leaders of both denominations appealed for peace. But some gangs continued to mark the houses of Hindus which soon proliferated into full-blown targeted attacks. Houses, cars and properties belonging to Hindus were vandalized. Children and women were held, hostage.

A misinformation campaign and its multi-fold amplification by the echo chambers have sparked communal tensions that were waiting to happen. A cricket match and a peaceful march of Hindus carried out to express solidarity for victims were just an excuse. The hooligans with Pakistani affiliation intolerant of an assertive Hindu community intimidated them by mobilising huge crowds. Muslims from nearby places occupied roads in Leicester, performed namaz and chanted “Allahu Akbar” slogans.

On September 17th, the mobs swelled in numbers and in the full view of the police, they desecrated the Saffron flag and vandalised a temple. Even as Hindus bore the brunt of the Jihadi mob, a narrative was carefully crafted to portray Hindus as instigators despite the Police investigations giving a clean chit to Hindus. Indeed, the media echo chambers and the cabal defended the Muslim vandalization as a reaction to a peaceful march. They attribute the attacks to the mobilisation of Hindutva forces. By casting aspersions on Hindutva, the spin doctors have laid bare their sinister agenda.

Roiled by Hindu assertion, a partisan, politically driven movement was launched to redefine “Hindutva”. While maintaining Hinduism as a pacifist and accommodating religion, the provocateurs painted “global Hindutva” as radical, extremist and bigoted. Back in India, the epithet “Hindutva” is used with references to RSS and BJP acclaimed pro-Hindu right-wing organisations. Hindutva is Hindu tatva is no different from Hinduism and unlike the monopolist and fundamental Christian and Muslim ideologies, Hindutva is not extremist. But by drawing false equivalence, the cabal has attempted to paint Hindus as fascists akin to racists and supremacists. This alleged distortion and subtle demonisation of Hinduism has paved the way for creating a thrust for fuelling Hinduphobia eventually justifying hate crimes against Hindus.

By effectively delegitimising Hindus through the draconian portrayal of Hindutva, the cabal has effectively legitimised the targeted attacks on Hindus. Hindus underestimated the implications of “agenda-driven” which is similar to anti-Semitism. Indeed, the Islamists who mobbed the Hindus sheltered in Durga Bhawan of Birmingham deemed the Hindu protests as “Hindutva mobilisation”. Lending credence to these accusations, leftist media channels launched a tirade against Hindus even though observers on the ground reported no trace of Hindu nationalism.

In one of the viral videos, an Islamist threatened, “this is a message from Birmingham to the BJP and RSS Hindutva supporters. You are not welcome in Birmingham”2. This protest of Islamists came in the wake of Sadhvi Ritambara’s event at the temple which was cancelled due to her ill health. Another Muslim fundamentalist Mohammed Hijab, who led targeted attacks on Jews previously warned, “If they (Hindus) believe in reincarnation, what a humiliation of them to be reincarnated into some pathetic, weak, cowardly people like that. Hindutva (Hindus), you are trying to act like gangster… Don’t ever come out like that again (referring to the protests by Hindus in Leicester). Do you understand? Are they going to come out again?”3.

It is truly rankling why Pakistan Muslims should threaten Hindus to behave in a certain way approved by them and how are they entitled to dictate to Hindus what to do. This intimidation has an eerie resemblance to the eviction of Kashmiri pandits from the valley. Making a shocking revelation Charlotte Littlewood, a research fellow in an interview with GB News revealed that “threatening messages from Islamists suggest they want to clean Hindus Leicester just like they did from Kashmir”4. Threatened Hindu families are now leaving Leicester.

Hindus make up 15% population of Leicester as against 18% of Muslims. Unfortunately, Hindus lack consolidated political support to defend and safeguard their interests making them vulnerable to threats.

On the other hand, over the years a narrative was evolved where calling out the crimes of Muslims is automatically deemed as “Islamophobia”. This deeply entrenched discourse has shaped long-term policies in various countries. For the fear of being branded as “Islamophobe” or “conservative”, parties consciously pandered to the Muslims to win electoral contests. The burgeoning demography of Muslims across the globe has made it an electoral compulsion for some political parties to rally behind them. At the cost of being politically right, they have wilfully brushed the crimes of this particular community under the carpet.

With the ecosystem understandably, hand in glove with the Muslims, their surging demography will force political parties to tow their line. While the eventual decimation of the pluralistic society is imminent, a genocidal threat looms large for the Hindus who are despised by the Muslims.

Even as terrible violence is unleashed on Hindus in Leicester, there is no trace of denouncement by Indian political outfits. On the contrary, there is a race to absolve the Islamists of violence against Hindus. In a true allegiance to the global ummah, some Muslim political analysts and leaders offered a cover for the rampage by Muslim fundamentalists in Leicester.