Has Rajdeep Sardesai lost it? His recent piece on BJP and PM Narendra Modi seems to suggest so. 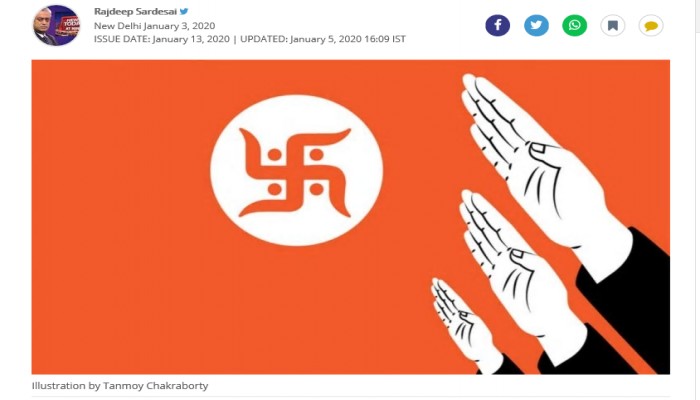 Rajdeep Sardesai has lost his mind. I have no qualms in making this drastic statement. Especially after reading his cover story in the latest edition of India Today.

And then Rajdeep very innocently asks us - Fantasy? Yes. Totally unimaginable? No.

So now let’s go back to the opening statement of this article – Rajdeep Sardesai has lost his mind. Fantasy? No. Totally unimaginable? Absolutely not!

His justification for this senile imagination? At the end of 2009, no one thought Modi would be where he is today. In his own words – “How wrong the political pundits were: the white-bearded regional boss of 2009 is the 2019 unquestioned Big Boss of Indian politics”. I love it when this group inflicts so much self- praise on themselves. In this case, calling himself a political pundit! Rajdeep very well knows that there was already a campaign underway by the not-so-political-pundits to announce Modi as PM candidate of the BJP, by the end of 2009 itself! Merely because the ilk of Rajdeep were merrily sleeping behind the wheel, doesn’t mean he gets to fancy weird imaginations!

Rajdeep’s fear mongering doesn’t merely stop here. He predicts that by 2024, “lines between state and religion would be totally blurred”. Not just that, he further emphatically announces that “Minority institutes will be denied state funding”. What exactly is the basis for this fear mongering by Rajdeep Sardesai? Has a single minority institute been denied any funding so far in the past 5.5 years merely because they are minority institutions? Does Rajdeep have any data to back his preposterous predictions?

By 2029, Rajdeep then predicts that “The north-south divide further widens in the course of a decade of confrontational politics.” The alleged north-south divide was first perpetrated by this dangerous ilk in 2017. The Wire carried out a lie filled filthy piece which has been countered in detail on this very site. The English media was hell bent on finding out isolated instances of “Hindi imposition” to create a further rift. The people of India gave a resounding slap to all these forces in the 2019 Parliamentary elections.

Yet, the senile Rajdeep doesn’t stop his crazy imagination. He predicts that CMs of “atleast 4 southern states” will “demand a referendum on the unilateral declaration of a Presidential system by the BJP”. I wonder where he gets such a pathetic vision for his country from. On what basis is this low-life Rajdeep Sardesai predicting that our country will slip into an anarchy and dictatorship? Prime Minister Narendra Modi has won two elections fair and square. Why does Rajdeep hate democracy so much when it doesn’t go his way?

What does he actually mean when he says that “The Supreme Court may have surrendered its magisterial autonomy.”? Does he expect the Supreme Court of India to be at his beck and call on every issue? Why doesn’t he take responsibility for his oft-repeated assertion that “The media may have lost its moral compass.”? Rajdeep has been corrected innumerable number of times on innumerable number of issues. Yet, he goes about spreading his lie-infested and hate-filled journalism. Why can’t he have a moral compass in the first place?

Parliament sessions have been showing record productivity since 2014. Many debates have happened on multiple laws and issues in the House. In addition, many committees have had detailed debates before finalizing the various laws of the country. Yet, the senile Rajdeep Sardesai asserts that “Parliament may have been reduced to a notice-board.” Is it the Parliament’s fault that Rajdeep Sardesai doesn’t follow the proceedings, and yet goes about making random assertions and predictions?

Another random prediction that Rajdeep makes is that in 2029 “Instead, it is civil society groups who have come together to warn against autocratic tendencies: large street protests have been ruthlessly crushed by a police state…”. Very cleverly he is alluding to the police action on violent protestors in 2019. Very cunningly, he is also trying to tell us that the “street protests” were peaceful and it was the police that overreacted. I wonder for how long does Rajdeep Sardesai want to suppress information? In today’s digital day and age, how does he actually think that people like him can suppress information, lie and get away with it?

His hate-filled article accompanied with an equally hate filled image is simply reinforcing the belief that this ilk would stoop to any low. By comparing anything and everything to the excesses of Emergency or the murder by the Nazis, this ilk is doing grave injustice to the sufferers of both these events. This ilk has no sense of proportion when it comes to spreading hatred and fear. It is unfortunate that they still have the reach to write gibberish and get published.

Perhaps a good prediction for 2029 would be that we have an English media that is responsible and doesn’t spread lies. In Rajdeep’s own words - Fantasy? Yes. Totally unimaginable? No.