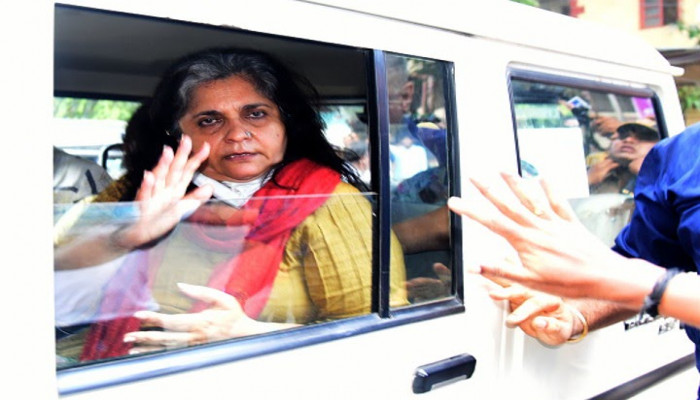 A special investigation team (SIT) filed a charge sheet against activist Teesta Setalvad, retired Director General of Police RB Sreekumar and former IPS officer Sanjiv Bhatt in a case of the alleged fabrication of evidence in connection with the 2002 Gujarat riots. Former IPS officer-turned-lawyer Rahul Sharma has been made a witness in the case, PTI reported.

The charge sheet was filed in the court of the chief metropolitan magistrate in Ahmedabad, said Investigating Officer and Assistant Commissioner of Police BV Solanki.

The three accused have been charged under sections 468 (forgery for purpose of cheating), 194 (giving or fabricating false evidence with intent to procure conviction for capital offence) and 218 (public servant framing incorrect record or writing with intent to save person from punishment or property from forfeiture) of the IPC, among other provisions.

Setalvad has been released on interim bail following a September 2 order of the Supreme Court. The SC asked Setalvad to surrender her passport to the trial court till the time the Gujarat High Court decides on her regular bail petition.

Setalvad was arrested on June 25 for allegedly fabricating documents to frame high-ranking officials, including then Gujarat Chief Minister Narendra Modi, in the 2002 riots cases in the state.

She was arrested a day after the Supreme Court, on June 24, dismissed the appeal filed by Zakia Jafri, wife of Congress leader Ehsan Jafri who was killed during the violence at Ahmedabad's Gulberg Society in 2002, challenging the SIT's clean chit to then CM Modi and others during the riots.

Sreekumar remains lodged in the jail in the case. The third accused, Bhatt is in a jail in Palanpur where he is serving life sentence in a custodial death case.