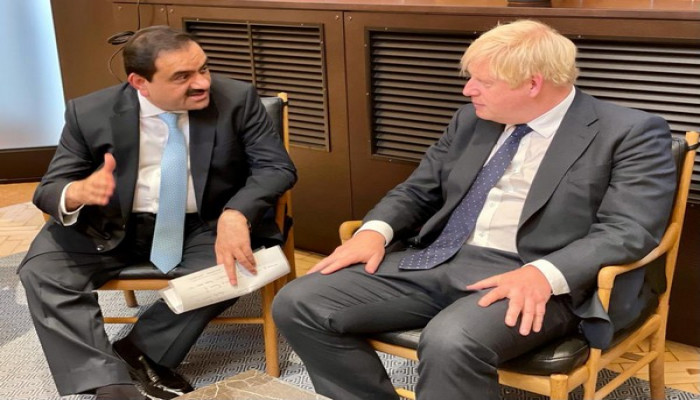 "Honoured to meet UK PM @BorisJohnson at the #GlobalInvestmentSummit. What a platform! Inspiring leadership in synchronizing global climate action. @AdaniOnline will commit $70bn to Energy Transition via Solar, Wind & H2. Thank you, UK Govt and @TradeGovUK, for the opportunity," Adani said in a tweet.

"Chairman @Gautam_Adani says the battle against climate change must be fought with equitable and pragmatic policies. Speaking on the sidelines of the UK Govt's Global Investment Summit in London, he called for setting practical goals and agendas to overcome the climate crisis," Adani Group said in a tweet on Tuesday earlier.

Meanwhile, during the second India-UK Multilateral Dialogue in London, the delegations of India and the UK have agreed to continue working closely to further deepen their cooperation on multilateral issues and exchanged views on the Commonwealth Strategic Plan and priorities.

According to an official release, the Indian delegation was led by Prakash Gupta, Joint Secretary (UN Political), Ministry of External Affairs and the UK side was led by Harriet Mathews CMB OBE, Deputy Political Director for UN, UK Foreign, Commonwealth and Development Office (FCDO).

"The UK side congratulated India on its successful presidency of the UN Security Council in August 2021. Discussions covered issues of mutual interest pertaining to UN reforms, counterterrorism, peacekeeping and climate action," said the release.

"The delegations agreed to continue to work closely to further deepen their cooperation on multilateral issues," it added.