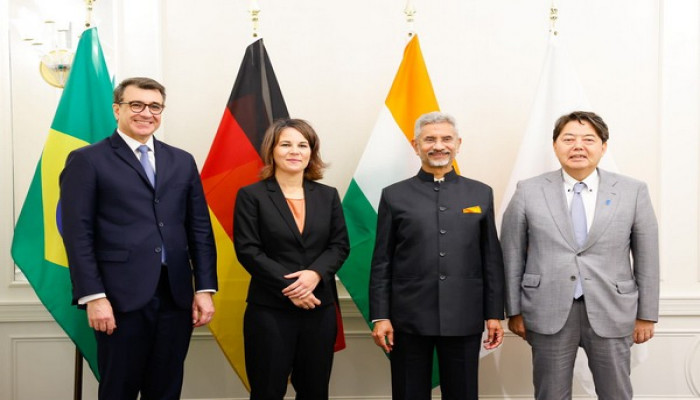 The Group of Four (G4) foreign ministers on Thursday expressed concern at the continued lack of meaningful progress in the Inter-Governmental Negotiations (IGN) on Security Council (SC) reform and renewed their determination to work towards commencing text-based negotiations without delaying the IGN.

In a joint statement, the G4 Ministers assessed that conflicts around the globe have brought to the forefront the urgency of reforming the United Nations and updating its main decision-making bodies.

They agreed that the inability of the Security Council to effectively address these challenges vividly demonstrates the urgent need for UN Security Council reform in order to better reflect contemporary geopolitical realities and to enhance its effectiveness and the legitimacy and implementation of its decisions.

Reviewing the work of the 76th Session of the United Nations General Assembly, the G4 Ministers expressed concern at the continued lack of meaningful progress in the Inter-Governmental Negotiations (IGN) on Security Council reform.

The G4 Ministers agreed that this Session had made it apparent yet again, that the IGN is constrained by a lack of openness and transparency. They agreed that in order to produce concrete outcomes, the IGN must be guided by the decision-making requirements and working methods laid out in the Charter of the United Nations and in the rules and procedures of the General Assembly.

In the joint statement, Ministers welcomed the clear recommendation of the President of the 76th General Assembly to "gradually move the process towards text-based negotiations”, and expressed hope that this guidance would be followed by all delegations in the 77th General Assembly Session.

Moreover, the leaders reaffirmed their strong support for the Common African Position (CAP) and emphasized that Africa needs to be represented in both the permanent and non-permanent categories of membership of a reformed and expanded Security Council, in line with the CAP as enshrined in the Ezulwini Consensus and the Sirte Declaration.