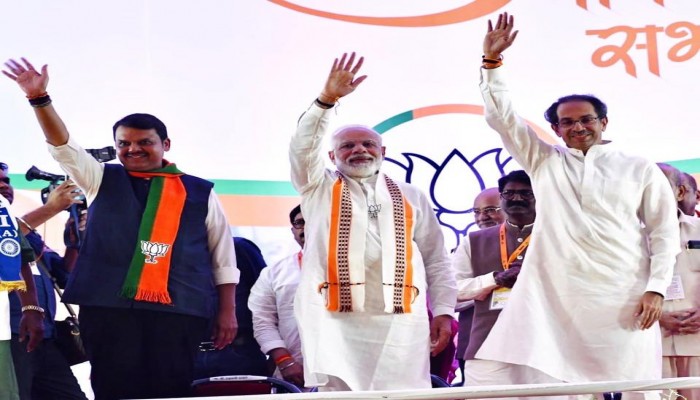 As the results of Assembly elections 2019 trickled in, everyone was dumbstruck due to outcome. The Incumbent BJP and Sena settled on 105 and 56 respectively defying all exit poll predictions. We are going to discuss why this happened and what are the real reasons for the setback for incumbent parties.

Analysis shows 7, 42,134 voters opted for NOTA as against 4, 60,741 votes who had chosen this option in 2014 polls. Collectively, the NOTA percentage stood at 1.35% of the total votes cast as against 0.91% of the previous assembly polls. In several constituencies NOTA stood second in the list which means if these votes would have been secured by other candidate the result might have been different.

The torrential rain in Sangli, Kolhapur, Satara of Maharashtra and inadequate government response there too was another reason for setback in the region affected by the rain. Kolhapur was worst affected region in Maharashtra. In a single village near Kolhapur 2000 people stranded according to congress MLA Wedettiwar.The Government of Maharashtra admitted that 27 people died due to flood. (https://www.huffingtonpost.in/entry/maharashtra-floods-flood-situation-in           maharashtra_in_5d4d79dbe4b0066eb710aa83)

Disaster management work of government was not satisfactory and also help of Indian Army/Navy should have been called for immediately. Maharashtra government or central government failed to convince BJP government in Karnataka to discharge water from Almaty dam so as to relive Maharashtra from flood water. Overall two lakh people affected due to the flood in Sangli and Kolhapur. It is pertinent to note that in the Kolhapur region, voter turn out was among highest in the state. Here the BJP-Sena yuti suffered maximum losses.

Average agricultural growth in Maharashtra from 2015 to 2018 was 0.1 per cent which is dismal and became a reason for a setback in Agro belt of Maharashtra like Marathwada, Vidarbha, Western Maharashtra and overall rural sector. Also the current unemployment rate in the state is 5.7 % which is causing alarm in state which has maximum number industries in India.

Take an example of Chattrapati Shivaji Maharaj Shetkari Samman Yojna when a loan waiver of Rs. 34,022 cr was announced owing to crop failure, falling prices and rising inputs along with other states like U.P and A.P.

As of 31 August 2019 total of 44,04,147 farmers received loan waiver worth Rs. 18,761. Here in this entire program banks surprisingly showed apathy in verification of accounts. When the government decided to link this entire scheme with Aadhar to remove duplication from the list of farmers eligible for load waiver it caused great disappointment among farmers who attributed the entire responsibility to government.

Many in the process alleged that the bank officers are asking for bribe for inclusion of Farmer names in the list. Government definitely should have taken stern measures against the defaulting offices however, it is pertinent to note that the government has paid the price in this election due to the “Babu” culture prevailing in the government machinery.

Co-operative sector in Maharashtra is part and parcel of power politics in this state. While BJP succeeded to rope in people like Radhakrishna Vikhe Patil, a big gun in co-operative sector, it failed to regulate the sector or establish its complete control over it. In 2014 the BJP government wanted to come up with ambitious amendment in MaharashtraCo-operative society Amendment Act 1960 whereby government proposed to appoint independent experts to the boards of all co-operatives including banks and sugar units however, government failed to hit the objective in spirit.Government also rolled back the caps on the surplus sugar molasses leading to massive benefit for the co-operative sugar industries.