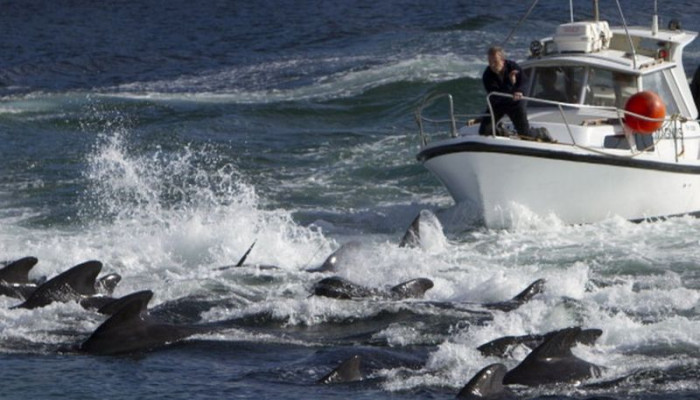 The government of the Faroe Islands, an autonomous Danish territory, is now bearing witness to a massive outrage over the merciless slaughter of more than 1,400 white-sided dolphins in a day in what was said to be the single biggest hunt in the northern archipelago.

"There is no doubt that the Faroese whale hunts are a dramatic sight to people unfamiliar to the hunts and slaughter of mammals," a government spokesman told AFP.

"The hunts are, nevertheless, well organised and fully regulated," he added.

Traditionally, the North Atlantic islands - which have a population of around 50,000 people, hunt pilot whales and not dolphins, the spokesman said.

"There are usually a few of them in the 'grind', but we normally don't kill such a large number," said a local television journalist, Hallur av Rana.

The "grindadrap" is a practice whereby the hunters first surround the whales with a wide semi-circle of fishing boats and then drive them into a bay to be beached and slaughtered.

"It looks quite extreme and it took some time to kill them all, while it's usually pretty quick," av Rana said.

Videos and pictures showing the bloodied corpses of more than 1,000 Atlantic white-sided dolphins on the beach sparked outrage on social media.

According to av Rana, although some 53 per cent of the islands' population are opposed to the "grind", there are no plans to abolish the practice. The authorities insist it is a sustainable way of hunting.

Olavur Sjurdarberg, chairman of the Faeroese Pilot Whale Hunt Association, feared Sunday's slaughter would revive the discussion about the sea mammal drives and put a negative spin on the ancient tradition of the 18 rocky islands located halfway between Scotland and Iceland.

"We need to keep in mind that we are not alone on earth. On the contrary, the world has become much smaller today, with everyone walking around with a camera in their pocket," Mr Sjurdarberg told local broadcaster KVF.

Sea Shepherd, a charity that campaigns against the hunting of whales and dolphins, described it as a "barbaric practice".