Facing stiff competition for assembly elections, KCR's national party will be a 'nonstarter' 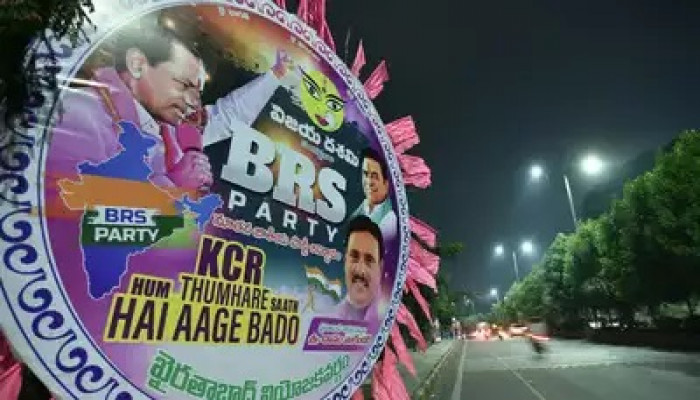 On October 5th, 2022 (Vijaya Dashimi) the Chief Minister of Telangana announced that he is now changing his party name from Telangana Rashtra Samithi (TRS) to Bharat Rashtra Samithi (BRS). He has been claiming since early 2018 that he wants to play a larger role on the national political scene.

In addition to the setback in the 2019 Parliament elections; the subsequent losses in 2 bye-elections and the GHMC election made KCR put these plans on the backburner. In early 2021, KCR gave very strong indications that he will be making his son KTR the Chief Minister. Everyone assumed that KCR will move on to fulfil his dream of a national role. However, nothing of such sort happened at that point in time (probably because of a severe backlash from various party leaders). Occasionally we have been treated to the media leaks that he is all set to announce the change in the party’s name but nothing ever happened, until yesterday.

KCR has been steadfast in claiming that there is a need to overhaul the Constitution of India. And in his overzealousness to make his point strong, he has ended up giving bizarre examples. Such as, “We need to increase the average speed of our trucks and trains, therefore we need a new constitution.” It’s not just about how bizarre the argument is, but also the threatening manner in which it was delivered that reinforced KCR’s combative personality.

The bizarreness doesn’t end there. KCR has been steadfast in claiming the central government has no role in laying roads in villages (“Only the state government that can understand the actual need of the villages “). Not just this, he has repeatedly questioned why the central government needs to build hospitals and education institutes also. The big question now we need to ask is – will KCR include these in his manifesto? Will he go out to the people of the country and tell them that he will not build hospitals and education institutes anymore?

He has made repeated trips to multiple states that have a strong non-BJP party either in power or in the opposition. None of these trips has resulted in anything fruitful for KCR or TRS. The latest outing with Bihar CM Nitish Kumar ended up with acute embarrassment to KCR, with the final 2 minutes of the press conference showing us a great glimpse into the confusion that prevails!

In yesterday’s announcement, KCR claimed that he will first focus on neighbouring states such as Karnataka and Maharashtra. This makes some sense because BRS can enter into an alliance with JD(S) and NCP for a couple of border seats and perhaps end up winning them too. He can then use these small victories to project how he is now a national force to reckon with. JD(U), BSP, and the TMC have all won a couple of seats outside their strongholds but have diminished in strength over a period of time because of a lack of focus. Every non-BJP party leader has now fashioned themselves into thinking that their party is the real alternative to the BJP at the national level. KCR went a step further and had flexis across various cities that projected him as a “Desh ki Neta”!

It has been claimed by some in the media that KCR’s strong grip on Hindi will make him a big hit in the Hindi heartland. It has been claimed by TRS that most schemes of Modi today are merely a copy of what KCR has already done in Telangana. He has continuously claimed that he was ridiculed when he set up the TRS in 2001, in the exact same manner that he is being ridiculed now. For some strange reason, he doesn’t seem to understand a basic difference – the TRS had a clear purpose – the formation of a Telangana State. The name change to BRS has no single purpose. And going by his utterances, it looks like the purpose of the BRS is to drastically reduce the powers of the central government. KCR’s “national” party will be a non-starter. He has a bigger problem to resolve first – the rise of the BJP as his main contender for the 2023 Telangana Assembly elections. Everything else can wait.