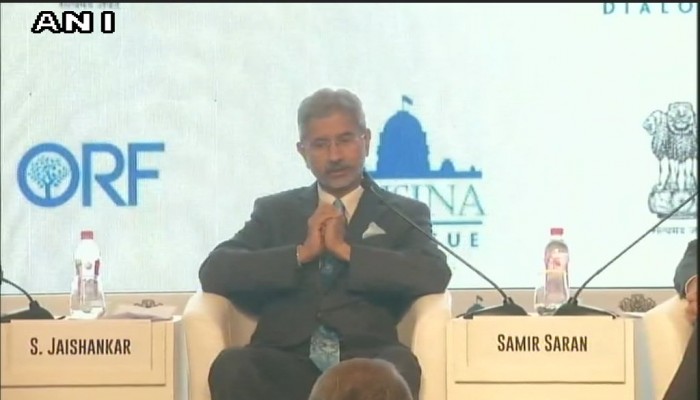 5th edition of the three-day Raisina Dialogue began in New Delhi on 14th January. Jointly organised by the Ministry of External Affairs and think-tank Observer Research Foundation (ORF), Raisina Dialogue is India’s flagship global conference on geopolitics and geo-economics. It is an outshoot of Modi’s grand vision for India. As a rising power, Modi envisioned that India has its own platform to organise discourses and shape narratives. External Affairs Minister Sushma Swaraj launched it on March 1st, 2016. 100 speakers from 35 countries attended the first edition themed “Asia: Regional and Global Connectivity”. This Indian initiative is an attempt to analyse global challenges, explore solutions and offer a stable transition into an era of rapidly changing World order. Five years since its inception, this dialogue has evolved into a vibrant platform. Current edition brought together 800 participants from 100 countries including 80 African countries. With over 40% female speakers, the platform is now lodestar of gender equality as well.

Coming close on the heels of de-escalation of tensions in Middle East, India’s global conference provided a platform for Iran’s Foreign Minister Zavad Zarif to do diplomacy and put forth Iran’s perspective on the brewing geopolitical conundrum.  Russian Foreign Minister Sergei Lavrov questioned the need for change in semantics of Asia-Pacific to Indo-Pacific and propped up India’s candidature for UNSC permanent membership. On the final day, US representative and India’s foreign secretary clarified that Asia-Pacific is a colonial construct, while Indo-Pacific is a global common, stretching from Kilimajaro to East Africa and doesn’t exclude China. Foreign Ministers from Maldives, Australia, South Africa, Estonia, Latvia, Hungary, Uzbekistan, EU, Czech Republic and Denmark attended the conference. Reflective of India’s substantial diplomatic rise, in the past five years, Raisina Dialogue evolved into a vibrant summit by bringing together strategic thinkers from different countries.

Raisina Dialogue broadly pivots on tripod of focus on global challenges, engagement with diverse groups and leveraging global contradictions which is also the foreign policy mantra of Modi government. India is often critiqued for punching below its weight and shying away from power. In the aftermath of the slew of iconic legislations, like triple talaq, abrogation of article 370 and the Citizenship Amendment Act (CAA), India was gripped by orchestrated halo of contradictions. Strategists who hailed Modi government’s aggressive and pro-active foreign policy launched scathing attacks on its political decisions. Undermining the accumulated diplomatic heft and global influence of the past five years, media churned out editorials condemning government’s political decisions which they rued would drastically undercut India’s international stature.

After the withdrawal of special status to Kashmir, marshalling diplomatic corps, through an extensive outreach, India apprised the countries of the indispensability of terminating the transient Article 370 for the economic development of the strategically important Jammu and Kashmir. Deeming complete integration of J&K as an assault on its larger strategic interests Pakistan initiated an anti-India propaganda roping in the Western media. Through extensive engagement, India demolished Pakistan’s attempts to internationalise the issue. Partnering with the western liberal media that lends platform to the anti-BJP voices, Pakistan began to tarnish Modi government’s image using epithets like-majoritarian, fascist, anti-minority, intolerant. Taking a leaf out of Western media’s narrative that government’s legislation would harm international image and foreign investment, a tribe of self-conscientious strategic thinkers firmed up criticisms. An uptick in slanderous campaign against government, raising alarm over its implications on global perception of India began markedly significant after the Citizenship Amendment Act (CAA). Critics propelled an apprehensive tenor and created illusionary fear of isolation. Soon, the narrative of hyphenation of India with an intolerant Pakistan began to find dominate the discourse. A former foreign secretary, termed CAA as a “self-inflicted goal”.

Article 370 and CAA are constitutional changes and internal matters of India. Any self-respecting country can never brook external intervention in domestic affairs. But strangely, by questioning the democratic functioning of an elected government and their transparently debated legislations in the Parliament, the lobbyists are doing a great disservice to nation. Caught up in this quagmire of senseless narrative peddled by the anti-Modi media, strategists are making hue and cry over India’s receding international reputation. Giving a religious hue to the bill meant to offer succour to the refugees who fled religious persecution, the lobby is perpetrating canards of India stumbling from the global pecking order.

From the platform of the Raisina Dialogue, S Jaishankar dispelled pessimistic outrage. Encapsulating the essence of India, he enunciated that India is not a disruptionist, mercantilist or self-centred power but a stabilising and a law-abiding power. As a steadily emerging voice of the South, India firmly believes in rules-based order.

Effectively warding off the vicious anti-India propaganda regarding CAA and article 370, Jaishankar submitted, world has common challenges- terrorism, separatism, migration. India is facing the national variant of these challenges.  Every country has its own way of responding to them. It is important that countries don’t develop a fixated idea as what is best is for others and judge them. India has inherited some problems. Instead of multiplying them and passing them off, the current dispensation chose to deal with them.

Retaliating to the western media driven polarised pernicious anti-India propaganda, who criticised the minister for snubbing Premila Jaypal, who gave free pass to Pakistani contestations and whitewashed its cross-border terrorism, Minister countered, “people are entitled to have opinions and people are entitled to have opinions on other people’s opinions”. Refusing to kow-tow to the whims of the Pakistani lobbyists, Jaishankar asserted India’s position on CAA.

He asked countries to introspect their actions on things like naturalisation (immigration laws) and the pathway they adopted. India is prisoner of past image but it now trying to get beyond that. It now wants to be more of a shaper, decider rather than being an abstainer. In an oblique reference to the lobbyists who perpetually seek Western approval he reacted, “are we going to define ourselves or let other people define us?”.

Alluding to the global challenges, which is the theme of the summit, Jaishankar used the forum to highlight India’s meaningful value-additions to alleviate them. India’s pioneering efforts towards Climate change remain underappreciated and Jaishankar supported his claims citing India’s coveted Climate Actions Tracker ranking. Having acceded to the Paris agreement and pledged to limit emissions, India is placed in the second-best category-<2°C compatible along with Bhutan, Costa Rica, Ethiopia, Philippines and Kenya and placed below the highest ranked countries Morocco and the Gambia. While developed countries languished in the insufficient and highly insufficient categories. But India is yet to make a head start in technology. Its traditional perspective of technology for economic benefits must transition into analysing it as effective strategic instrument.

Bucking the prejudiced perception of India laggard delivery of connectivity projects, in the past five years, India handled 142 projects and efficiently delivered 53 of them in the immediate neighbourhood. Besides it refurbished pre-1965 Bangladesh road and rail networks, waterways, ports, built houses for Sri Lankan Tamils, launched first petrol pipeline in South Asia between Motihari to Amlekhunj, finished hydroelectric projects in Nepal and Afghanistan. India has built a big convention centre in Niger in a record time of 14 months and expediting projects in Sudan, Rwanda Ethiopia.

Being a vital player, India has enormous stakes in the region. Jaishankar enumerated India’s relations with other powers and various stakeholders in the region Succinctly, summing up Indo-China unique relationship he said, “very rarely in history have two powers who are neighbours actually gone up in the international order at approximately the same time. Each one is reaching a new equilibrium with the world but also each other”. To make the relationship work, both countries must find accommodation and understanding on key issues. He termed Indo-Russian relationship as extraordinarily stable and sustained by strong sentiments which are rational.

In the past few decades, Indo-US strategic partnership has become most comprehensive with extensive ranging from G to G (Government), B to B (Business), T to T (technology), P to P (People) and now B to G. “There’s virtually no area of activity where India and the US don’t work with each other and deal with other…pick a sector and I’ll show you something substantive happening in the relationship” he added. India-Australia relations are poised for big jump. But both countries must step up in terms of regional and global responsibilities. India is underperforming with Europe which is largest trade partner, important technology partner and financial power. India must strike strategic conversations with Europe on collective and subgroup basis to energise relations.

As the net security provider of the region, India has signed 16 white shipping agreements, given naval equipment to eight neighbours and stationed surveillance radars in 6 coastal countries and conducted 7 HADR Humanitarian Assistance and Disaster Relief operations. As a responsible global power, India extended line of credit worth $2 billion to 11 countries, trained more than 100 troops, conducted military training teams in 11 countries, and forged hydrographic cooperation with five maritime neighbours in the past five years. Modi government has painstakingly accumulated enough diplomatic capital and diligently built a Brand India. In his dialogue with president of ORF Samir Saran, Jaishankar reflected on Indian foreign policy successes to feature India's steady rise and dispel the gloom of peddled fake narratives.

Rebutting the bigoted criticism and busting the pessimistic nimbus, Jaishankar defined India’s way- “We are a pluralistic society and a market economy. What has changed with more influence and greater capacity is that we express ourselves more decisively”.