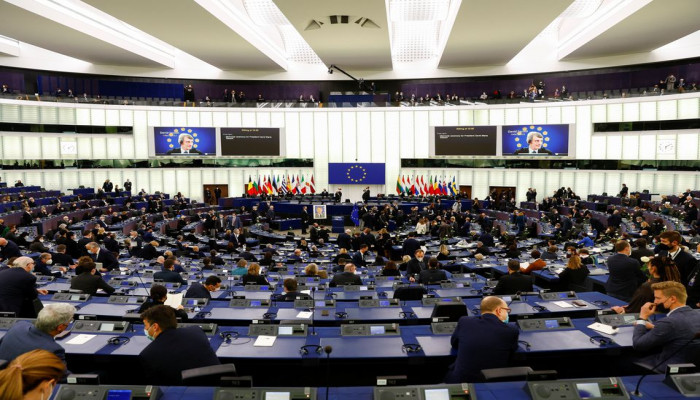 The European Parliament has declared Russia as "state sponsor of terrorism" over the "brutal and inhumane" acts inflicted upon Ukraine and its citizens since the launch of the invasion.

"The deliberate attacks and atrocities carried out by the Russian Federation against the civilian population of Ukraine, the destruction of civilian infrastructure and other serious violations of human rights and international humanitarian law amount to acts of terror against the Ukrainian population and constitute war crimes," MEPs said in a non-binding but highly symbolic resolution.

"In the light of the above, (the European Parliament) recognises Russia as a state sponsor of terrorism and as a state which uses means of terrorism."

As the EU currently cannot officially designate states as sponsors of terrorism, Parliament calls on the EU and its member states to put in place the proper legal framework and consider adding Russia to such a list. This would trigger a number of significant restrictive measures against Moscow and have profound restrictive implications for EU relations with Russia.

The strongly-worded resolution was overwhelmingly approved on Wednesday afternoon with 494 votes in favour, 58 against and 44 abstentions, during the monthly plenary session in Strasbourg.

In the final version, MEPs denounce Russia's "illegal, unprovoked and unjustified war of aggression" against Ukraine and accuse the Russian army and its proxies of committing a long list of crimes, such as the murder of "thousands" of civilians and "hundreds" of children, attacks on essential infrastructure, summary executions, abductions, rape, harassment, torture, mass detentions and forced deportations.

"These brutal and inhumane acts are causing death, suffering, destruction and displacement," MEPs said, noting the almost 40,000 war crimes that have so far been documented in Ukraine.

“Russia must be isolated at all levels and held accountable in order to end its long-standing policy of terrorism in Ukraine and across the globe,” he said in a social media post.

"I propose designating the European Parliament as a sponsor of idiocy," Russian foreign ministry spokeswoman Maria Zakharova wrote on Telegram.