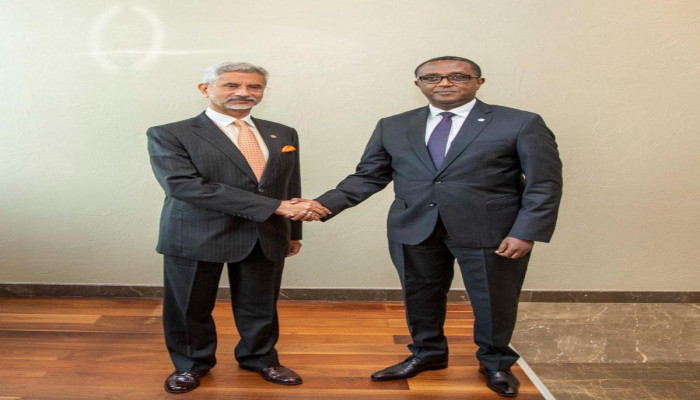 External Affairs Minister S. Jaishankar on Thursday held talks with his Rwandan counterpart Vincent Biruta during which they discussed the agenda of the Commonwealth summit beginning Friday and exchanged perspectives on regional developments.

"Welcomed the Centre of Engineering constructed with Indian support. India will continue to provide vaccines in the global fight against the pandemic," Jaishankar tweeted.

EAM Jaishankar is on a four-day visit to Rwanda, East Africa, to attend the 26th Commonwealth Heads of Government Meeting (CHOGM). He will be representing Prime Minister Narendra Modi at the summit of the 54-nation bloc on June 24-25.

Mr. Jaishankar is leading the Indian delegation to the CHOGM, which had earlier been postponed twice due to the Covid-19 pandemic. The theme of the 26th CHOGM Summit is: "Delivering a Common Future: Connecting, Innovating, Transforming".

Jaishankar also met Kenya's cabinet secretary for foreign affairs Raychelle Omamo and discussed the impact of the Ukraine conflict.
"So nice to meet my friend Raychelle Omamo of Kenya. Our discussions focused on the impact of the Ukraine conflict on food, fuel, and fertilizer security for the Global South. Reaffirmed our ongoing cooperation in the UNSC," he said in another tweet.

Prime Minister Narendra Modi's trip to Rwanda in July 2018 was a historic one as it was the first visit by an Indian Prime Minister to the East African country.

According to the website of the Indian high commission in Rwanda, there are approximately 3,000 Indian nationals and PIOs (Person of Indian Origin) in Rwanda. Rwanda's only sugar refinery, the country's only modern textile mills as well as soap and cosmetic factory are PIO-owned.

The leaders of the Commonwealth member states are scheduled to deliberate on issues of contemporary relevance, including global challenges like climate change, food security, and health issues, and are likely to adopt a number of documents including the Kigali declaration on child care and protection reform, a declaration on sustainable urbanization and commonwealth living lands charter.