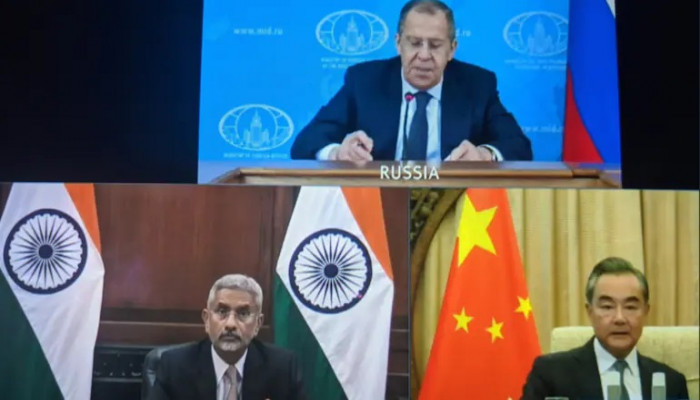 While addressing the 18th edition of RIC meeting, EAM Jaishankar said, “We have agreed that the agenda for today’s meeting will include topical issues of- (i) Fight against Covid-19 pandemic, (ii) Reforms of the Multilateral System and (iii) International Hot-spot Issues.”

He said, “I would like to thank my colleagues from Russia and China for their support and cooperation during India’s chairmanship since September last year. I also take this opportunity to specially thank the Think-Tanks from Russia and China for actively participating in the RIC Academic Conference held in video-conference format under India’s chairmanship in April this year.”

He also reaffirmed India’s continued commitment to foster closer dialogue and cooperation among the three largest nations in the Eurasian region under the RIC mechanism.

He said, “I believe that our cooperation in areas like trade, investment, healthcare, education, science & technology and politics etc could significantly contribute to global growth, peace and stability. This would be in line with our common ethos of recognizing the "World as a Family”. Our approach to global development should be human-centric and not leave anyone behind.”

“The Covid pandemic has shown the interdependence of an inter-connected world. The need of the hour is, therefore, "One Earth One Health”. That means a timely, transparent, effective and non-discriminatory international response to global health challenges including pandemics, with equitable and affordable access to medicines and critical health supplies,” he added further.

“We believe that a multi-polar and re-balanced world based on sovereign equality of nations and respect for international law and contemporary realities requires Reformed Multilateralism.”

He also acknowledged India’s concerns about the recent developments in Afghanistan, especially the suffering of the Afghan people and reiterated that India supports an inclusive and representative government in Afghanistan as also other provisions of UN Security Council Resolution 2593.

He said, “In line with our commitment to the well-being of Afghan people, we have offered supply of 50,000 MT of wheat to Afghanistan to address the drought situation. RIC countries need to work together to ensure that humanitarian assistance reaches the Afghan people without hindrance and without politicization. It is necessary for the RIC countries to coordinate respective approaches on the threats of terrorism, radicalization, drug trafficking etc.”

The Russia, India, and China collective, known as RIC, as a strategic grouping first took shape in the late 1990s under the leadership of Yevgeny Primakov, a Russian politician and diplomat who was also the prime minister of Russia from 1998 to 1999, as 'a counterbalance to the Western alliance'.

Together, the RIC countries occupy over 19 percent of the global landmass and contribute to over 33 percent of global GDP. All three are nuclear powers and two, Russia and China, are permanent members of the UN Security Council, while India aspires to be one.

On the sidelines of RIC meet, Russian Foreign Minister Sergey Lavrov & Defence Minister Sergey Shoigu held talks in Delhi with their Indian counterparts Dr S. Jaishankar and Rajnath Singh.  This meeting will be the first of its kind in the "two plus two" format, said Russian Embassy.

The ministers are expected to hold in-depth discussions of the key regional and international topics, including the situation in the Asia-Pacific region and developments in Afghanistan and Syria, as well as exchange views on interaction within the SCO and RIC.