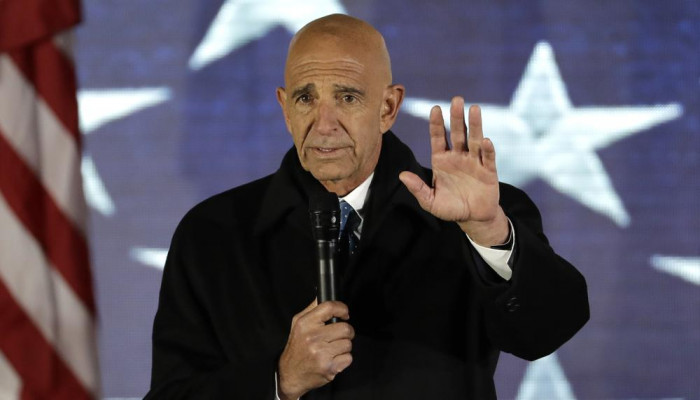 Tom Barrack, a billionaire friend of Donald Trump who chaired the former president's inaugural fund, was arrested on Tuesday and charged with illegally lobbying the Trump administration on behalf of the United Arab Emirates.

Matthew Grimes, an associate of Barrack, was also arrested. A third person, UAE citizen Rashid Sultan Rashid Al Malik Alshahhi, is at large. All three were charged with seven counts of crime in an indictment unsealed in a New York City federal court. The arrests took place in California.

Barrack, 74, of Santa Monica, California, was among three men charged in federal court in Brooklyn, New York, with acting as unregistered foreign agents as they tried to influence U.S. policy on the UAE’s behalf while Trump was running in 2016 and later while he was president.

Tom was a lead speaker at the Republican convention in 2016 at which Trump was nominated as the party’s nominee, and after election served as chairman of Trump’s inauguration committee.

Barrack's spokesperson refuted the charges. "Mr. Barrack has made himself voluntarily available to investigators from the outset. He is not guilty and will be pleading not guilty," the spokesperson said.

U.S. Department of Justice official Mark Lesko said in a news release that "the defendants repeatedly capitalized on Barrack’s friendships and access to a candidate who was eventually elected president, high-ranking campaign and government officials, and the American media to advance the policy goals of a foreign government without disclosing their true allegiances."

“In May 2017, Barrack agreed to provide Alshahhi with non-public information about the views and reactions of senior United States government officials following a White House meeting between senior US officials and senior UAE officials,” said the office of the US attorney for the eastern district of New York in a statement.

Matt Herrington, a lawyer for Barrack, said his client “made himself voluntarily available to investigators from the outset. He is not guilty and will be pleading not guilty today”.