Despite divergent views G7 adopts an aggressive posture against China 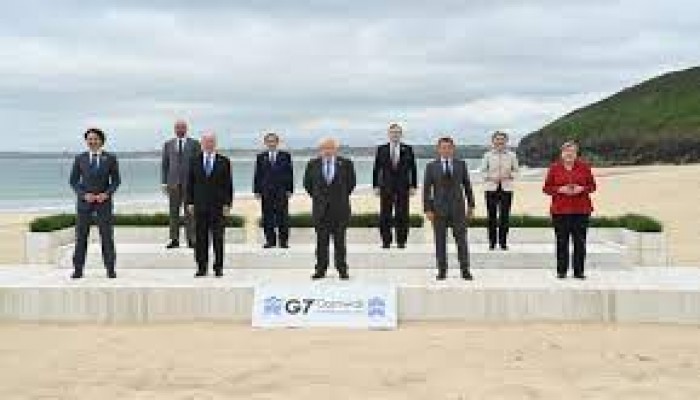 The 47th G7 summit meeting held at Cornwall in UK from June 11-13th after two years exuded new energy. With renewed focus on international cooperation, the members in principle agreed on five big agenda items. Being the first major get-together of the World leaders since the world was hit by Wuhan virus, the major talking point has been investigations into the origins of the pandemic.

The above-mentioned priorities laid the framework for a multilateral cooperation. Interestingly, baring the climate change proposition, the underlining common factor has been an aggressive China. As an originator of the pandemic, China holds crucial answers to pandemic related investigations. Similarly, Beijing’s mercantilism and predatory trade practices have marooned several small countries in debt traps and its authoritarian and opaque style of functioning is posing threat to shared values.

After the subtle messaging at Quad Leaders meet and instituting investigation into Wuhan virus origin, in continuum with predecessor Trump, President Biden, called for collective countering of aggressive China. Invoking the guiding principles of G-7 of commitment to multilateralism, through a collective and consultative approach countries agreed on aspects which are the enduring ideals of free, open societies and democracies and the very principles which authoritarian China infringes.

Though an absolute unanimity between the G7 nations has been absent given their deep financial linkages with China, members affirmed their support to the final draft. Reiterating support to the global fight against pandemic, G7 pledged 1 billion vaccine doses to poorer nations. The support which is critiqued as too little too late by many activists, certainly made up for good optics of rich countries towards the developing world.

Announcement of 1 billion vaccine doses which included 500 million doses of Pfizer and Moderna and 100 million doses each by the UK and Canada grabbed international attention. Interestingly, the US doses will be purchased from the second tranche of $2billion pledged as assistance and routed to poor countries through COVAX1.  Devoid of the vaccine infrastructure to administer doses even as World Bank has extended credit to the tune of $12 billion, loomed by concerns of increasing debt profile, critics argued that vaccine inequality is bound widen.

Calling the bluff of China’s “non-market policies and practices”, G7 reiterated the responsibility of “large economies in upholding the rules-based international system and international law”. In the same breath, G7 expressed concerns over the human rights practices of China. Terming Beijing’s treatment of Uyghurs as “genocide” US and EU imposed sanctions on the CCP officials. China responded with retaliatory sanctions. Miffed by Chinese actions, EU parliament refused to debate and vote on the Comprehensive Investment Agreement (CIA) and led to temporary freeze of its ratification.

Taking serious objection to forced labour and shrinking human rights, G7 affirmed, “we will promote our values, including by calling on China to respect human rights and fundamental freedoms, in relation to Xinjiang and those rights, freedoms and high degree of autonomy for Hongkong enshrined in the Sino-British Joint Declaration and the Basic Law”.

Indo-Pacific has emerged as a region of major geopolitical contestations. Not be left behind, G7 countries- France, Germany, UK, (EU) recently announced their respective policies for the region. Reiterating importance of maintaining free and open Indo-Pacific based on rule of law, G7 took cognizance of growing instability across Taiwan Strait and indicated that “(G7) encourages the peaceful resolution of cross-Strait issues. We remain seriously concerned about the situation in the East and South China Seas and strongly oppose any unilateral attempts to change the status quo and increase tensions”. With this statement, G7 has seemingly overstepped on China’s so-called red line disputing the “One China policy”.

Ramping up the plans to counter China, the G7 led by the US announced a $40 Trillion Build Back Better World (B3W) infrastructure partnerships as an alternative to BRI (Belt and Road Initiative). Without naming China, stating that Wuhan virus pandemic has exacerbated infrastructure needs of low and middle-income countries, G7 declared its development vision which read thus- “we believe that infrastructure development, implementation and maintenance- carried out in a transparent and financially, environmentally, and socially sustainable manner-will lead to beneficial outcomes for recipient countries and communities”.

Alongside, G7 appealed Russia “to stop its destabilizing behaviour, malign activities, including its interference in other countries democratic systems and to fulfil its international human rights obligations and commitments”.

By implication, G7 affirmed support to the Normandy process and implementation of Minsk Agreements in support of Ukraine and expressed concerns over heavy handedness of Belarusian authorities. G7 called for denuclearization of DPRK, condemned Myanmar coup, appealed for reduction of violence in Afghanistan, pledged to never allow Iran develop a nuclear weapon and welcomed the discussion to facilitate return of the US and Iran to JCPoA (Joint Comprehensive Plan of Action).

G7, a club of rich democratic countries comprising of Canada, France, Germany, Japan, Italy, United Kingdom and United States extended invitation to India, Australia, South Korea and South Africa as Guest countries for the Summit. Prime Minister Modi participated in two outreach sessions- Build Back Stronger Health where he appreciated the help of G7 countries during the pandemic and sought support for the TRIPS waiver proposal at WTO initiated with South Africa. As a lead speaker in the session- “Build Back Together-Open Societies and Economies” and “Building Back Greener Climate and Nature” recalled democracy and freedom as part of India’s civilizational ethos and expressed shared concerns of the vulnerability of Open Societies to disinformation and cyberattacks. India along with other outreach countries and G7 members signed a Joint Statement on “Open Societies”3.

Prime Minister Modi in one of the outreach sessions gave “One Earth-One Health” mantra and called for a whole society approach. He advocated for “next phase studies (WHO-convened) to reach “robust conclusions” hinting at a China and emphasized on the special responsibility of the democratic and open societies to prevent future pandemic4.

Modi first attended the G-7 Biarritz summit at France as Good Will Partner in 2019. In 2020, President Trump extended invite to the summit proposed to be held at Camp Davis. But it was cancelled due to Wuhan virus. Due to surging Wuhan virus second wave, Modi couldn’t physically attend the Cornwall G7 summit.

Ahead of his Europe trip, Biden wrote, “this trip is about realizing America’s renewed commitment to our allies and partners, and demonstrating the capacity of democracies to both meet the challenges and deter the threats of this new age”5. In line with the stated objective, by reiterating America’s unflinching support to democratic values, Biden made a rallying call to like-minded nations. G7 Summit brought together major democratic countries. Concluding the outreach sessions, Prime Minister Boris Johnson termed the Cornwall G7 as Democracies-11 including the four guest countries seeding the idea of a democratic axis.

Aside the shared values of democracy, liberty and equality, the D-11 is an agglomeration of disparate nations with conflicting economic, trading, developmental interests and objectives. Majority of them have strong economic ties with China, making economic isolation of Dragon difficult. Determined to go for the jugular, notwithstanding the weak links, President Biden used the G7 to build a strong counter-force against China.

Pandemic has changed the World view of China. Beijing’s complicity in pandemic outbreak, weaponization of covid supplies, wolf-warrior diplomacy, aggressive expansionism in South China Sea, incursions across Cross Straits, East China Sea, stand-off at LAC under the pandemic cover, trade sanctions in response to call for independent investigation into pandemic origins and suppression of freedom in Hongkong, Xinjiang have blown off the mask of China’s peaceful rise. Nations are wary of Chinese aggression and hostility. China’s popularity across the World slumped to its lowest now.

Countering China and its audacity to institute an opaque governance system has become a priority. Posturing of a united front by democracies is thus an attempt to build a post-pandemic international order which is rules-based and fair.

Even as the impact of G7 summit is widely debated, India reposed interest in B3W which is congruent with its vision. Since its launch, India has strongly objected to BRI that passed through the legitimate territory of Pakistan Occupied Kashmir and has been instrumental in Beijing’s deep entrenchment in its neighbourhood.

In response to G7’s unified position, China cautioned that “days when small groups of countries decided the fate of the World were long gone”6. The Chinese embassy in London accused G7 of “lies, rumours and baseless accusations” and added, “G7 takes advantage of Xinjiang-related issues to engage in political manipulation and interfere in China’s internal affairs which we firmly oppose”7. A miffed China made largest numbers of incursions into Taiwanese airspace on Tuesday. Reportedly 28 Chinese aircrafts entered Taiwan’s ADIZ (Air Defence Identification Zone) asserting reunification under “One Country, two systems”8.

Swiping the G7 and its allies, a cartoon, “the Last G7” a parody of Leonardo Da vinci’s “The Last Supper” published by artist ‘Bantonglaoatang’ on Weibo became viral. The Chinese Communist Party (CCP) mouth piece republished it9.

Picture is worth thousand words, with its official endorsement Beijing revealed its narrow-mindedness and prejudice.